Formerly Known As…takes us into an all too possible future

This post is sponsored by Flatiron Books. All opinions expressed in this post are based on the writer’s personal views.

FKA USA, written by Reed King (a pseudonym for a New York Times bestselling author and TV writer), is a story very much about now projected onto a later. Set in 2080s in the chunk of climate-changed land Formerly Known As the USA (get it?), protagonist Truckee lives in a land fractured into many independent nation-states. He resides specifically in Crunchtown 407 (the place formerly known as Little Rock, Arkansas, if you were wondering), which is part of the Crunch, United Colonies, obviously.

I wasn’t an idiot—at least I wasn’t any more an idiot than the average squid. I knew that Crunch 407 was a shitdump. I knew I was poor. I knew I was meant for an oil wheel in a machine that worked to crank out cash for the uppercrusts. Despite the Corporate Pride Movement and the songs about the colonial world, despite the jingles and the free Dynase™ with every purchase at the company store, despite the constant smiling and the holos that slicked that everything was better in Crunch 407, I knew it. But it was still home. And in a world staggering toward the finish line, that counted for a lot. 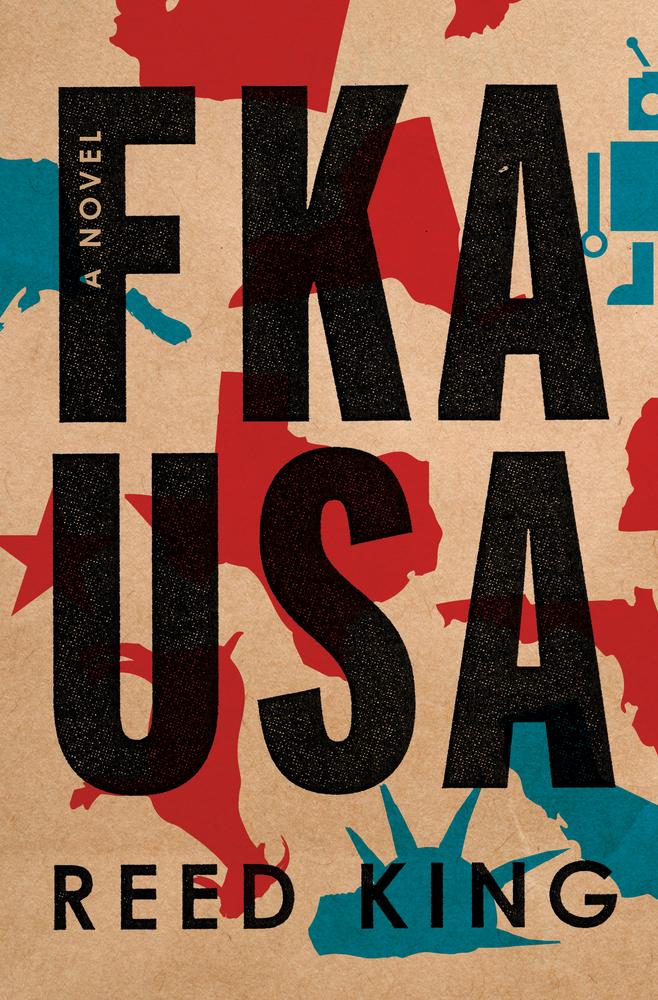 FKA USA is told mostly in first-person from the point-of-view of Truckee, who may be a 16-year-old factory worker, but reads older, a reflection of the world he’s grown up in. The world of FKA USA isn’t sacred, nor are Truckee’s observations of it; they are messy, crass, and teeming with chaotic life. Truckee acts as an “everyman” character of sorts. He is no superhero. He is not the smartest, strongest, or bravest of the humans, genetically-enhanced animals, or robots we meet, but he is pragmatic and very aware of his relative powerlessness in the face of corporate and national interests, which makes him pretty damn easy to relate to.

“Why did everyone think I was some kind of hero, just because I’d dodged the blow-up at Production-22 with my skin cells intact?” Truckee wonders to us shortly after he is tasked with saving the world by safely transporting a talking goat (Barnaby, a book highlight) from Crunch 407 to San Francisco with the help of a female-identifying android named Sammy and a lobotomized giant named Tiny Tim.

The characters are loosely modeled after the characters from Wizard of Oz, with Truckee as Dorothy, Barnaby as the Cowardly Lion, Sammy as the Tin Man, and Tiny Tim as the Scarecrow, and their world is a fever dream reflection of our own, not unlike the experience of watching the reimagined Oz of Emerald City or the extrapolated-out now of Westworld or Black Mirror.

This post-apocalyptic world is dismal, but, unlike so many of the others we get in pop culture, it’s also amusing—or at least it is amusing to the main POV character, which makes moving through its more unsettling aspects more fun. This dystopa is quirky, interesting, and filled with the same kind of mundane absurdities and socially-acceptable coping mechanisms that anyone living in late stage capitalism can recognize.

Characters are addicted to chemically-engineered foods and their social media feeds, now delivered in VR format. Vaping is a way of life for many of the residents in Crunchtown 407. As Truckee tells us: “I’d never been big on weed, not compared to everyone else I knew … but since I was sneaking into enemy territory to deliver brain cells to a Crunch sleeper agent in the hopes that we could stop a global apocalypse of mind-controlled zombies, I figured it was as good a time to get high as any.”

Structurally, FKA USA is a novel with strong supplementary material in the form of footnotes, maps, and excerpts from the in-universe travel guide The Grifter’s Guide to the Territories FKA USA from which the book presumably takes its name. In this way, it is like candy for any speculative fiction readers who love the worldbuilding of it all. (Check out the endpaper map below, via Tor…) 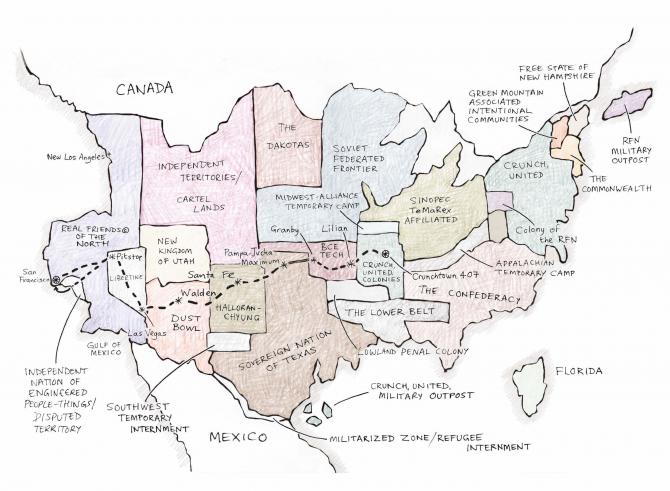 The book is sectioned by location; instead of acts or parts, we get segments of the cross-country journey. The trek, which provides a structure and momentum for the narrative, takes almost 70 pages to get going, but once it does, it is unpredictable, like any good road trip—fictional or real—should be, and we get a better look at this land formerly known as the USA.

Does FKA USA get this country right? I don’t know! These days, I’m more confused than ever by America and what its soul, to perhaps unhelpfully essentialize it, might look like. But I know that with that confusion comes an insatiable thirst for diving into others’ perspectives of it.

Reed King told Cinema Blend in an interview that the book’s setting came out of a few years of cross-country travel during which Reed had been “struck again and again by the sheer size of the United States and the diversity of its landscapes,” continuing: “I’d been struck, too, by how little many of the people on the coasts seemed to understand the interior of the country, and vice versa. It struck me as incredible the United States had even lasted this long.”

Whether or not you recognize the United States extrapolated out into the setting for FKA USA, you will probably recognize some truth in King’s statement of motivation. We are living in what feels like an increasingly fractured United States, one that feels less stable than it has in decades. Why not take a trip with Truckee across it and see what you find?

FKA USA is now available to buy from Amazon, Indiebound, or your local independent bookstore. It is also available at your local library!

There are at least 15 principle characters to keep track of. Too confusing? Not a bit of it. Ten years in the writing and well worth it.