John L. Coker III, President of First Fandom (of which I am a proud member though not a First Fandomite) and I have occasionally exchanged correspondences and the other day he sent me a wonderful, if blurry, image of Forrest J. Ackerman, Science Fiction’s No. 1 Fan, who passed several years ago.

It’s an image of 4SJ reading an issue of Amazing Stories from the Ray Palmer era, also known as the Shaver Mysteries era or the Flying Saucers Are Real era of the magazine, simultaneously the magazine’s period of highest circulation and deepest Fannish dissatisfaction.  Ray went in a direction similar to Campbell’s (embracing the woo woo) though earlier and more flamboyantly than Astounding’s captain, and with better results, at least in terms of circulation and advertising revenue.

Ray Palmer recognized that there were far more potential readers interested in the fringe elements surrounding science fiction, or, more specifically, that there was gold in them thar hills if a relatively simple and minor change was made in presentation:  instead of treating science fiction as speculation, treat it as contemporary.

Apparently a lot of readers have difficulty with the “speculative” nature of the genre;  they can’t handle “someday, our research suggests we may discover and even communicate with intelligences on other worlds”, but they can handle “beings from other worlds in flying saucers have landed in the backyard”.  They can’t handle “what if the Earth were hollow.  Could it be inhabited?” (long discredited speculation), but they can handle “robots from the center of the Earth are coming after you!”

With the relatively modern exception of OMNI magazine in the 80s and 90s, most SF periodicals have maintained a strict line of separation between “reasonable, largely scientifically based speculation” and what Amazing HQ has long officially titled “The Woo-Woo”, but we acknowledge that there was a time period in the magazine’s history when this was not the case.  From 1938 to 1949, Palmer increasingly embraced the woo-woo, culminating in the publication of Richard Shaver’s Lemuria tales, presented as true-life stories.  (Look it up.)

Fandom was not pleased, a position that 4E apparently shared, as we can see here: 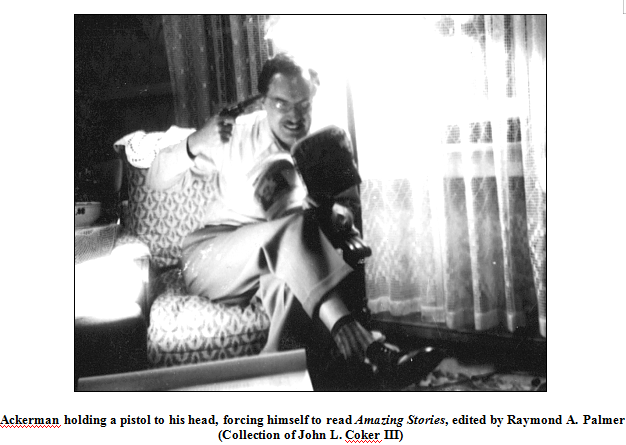 It’s difficult to make out, but you should get the gist.

I’d never seen this pic of Ackerman before, but I have seen another one of a young Forrest reading the very first issue of this magazine; apparently, a local newspaper back in the 30s was so impressed with the young fan’s devotion to the genre and his budding collection of pulp magazines they ran a feature story on him. Forrest posed for the following picture, choosing to hold a copy of Amazing Stories (how cool is that!?) 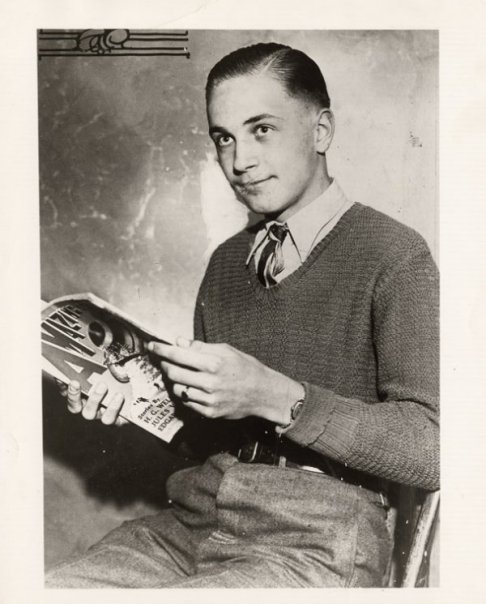 But there’s also a third image of Forrest – on the cover of almost Amazing Stories.  Back in the 70s, Forrest put together an homage to himself and the magazine that inspired him and published Amazing Forries, reproducing a well-known Frank R. Paul cover with himself penciled in.  4E himself gave me a copy at SunCon, the 35th World Science Fiction Convention in 1977 – 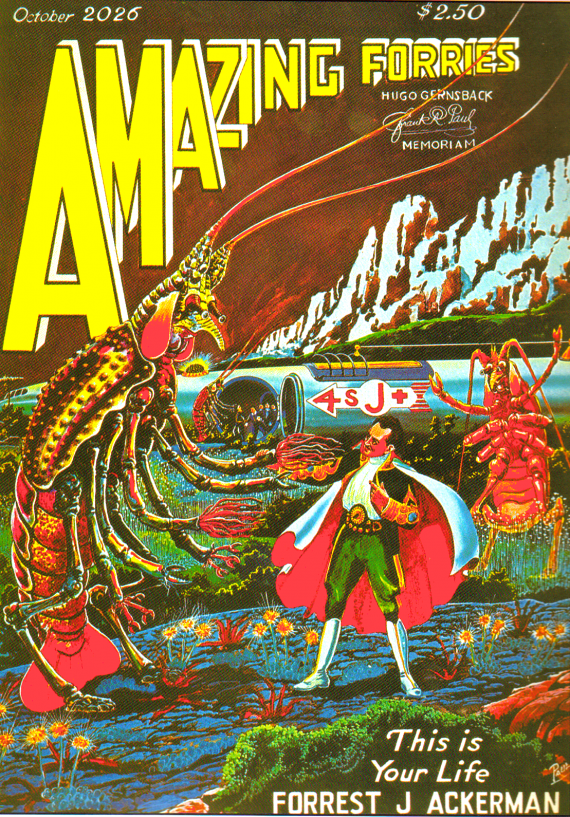 Like any good con report, we begin the proceedings well in advance of the event.  Several months ago I was invited to attend the convention as a panelist – technically my first ever panel appearance at a science fiction convention (though not my first public presentation by a long shot:  I’ve presented for radio and […]