Do you think a lot about online privacy, artificial intelligence, and the power and perils of social networks? Of course you do—you’re living and thinking in the Digital Age! Boy, do we have a book for you…

Naomi Kritzer, who was a 2015 Nebula Award finalist for her Digital Age-friendly-titled short story “Cat Pictures Please” (which did win the Locus Award and Hugo Award), has a speculative fiction book on the horizon, and it is all about the pros and cons of creating community in the age of the internet.

The book is called Catfishing on CatNet, and it asks the question: How much does the internet know about you? It follows protagonist Steph, who is always moving because of her mom, and finds consistent community in an online social media site where users upload cat pictures called, you guessed it, CatNet. Little does Steph know that the admin of the site is a sentient A.I. When the A.I.’s existence is discovered by outsiders, it’s up to Steph and her community (both online and “IRL”) to save her.

Den of Geek is happy to reveal the hypnotizing cover for Catfishing on CatNet. Check it out… 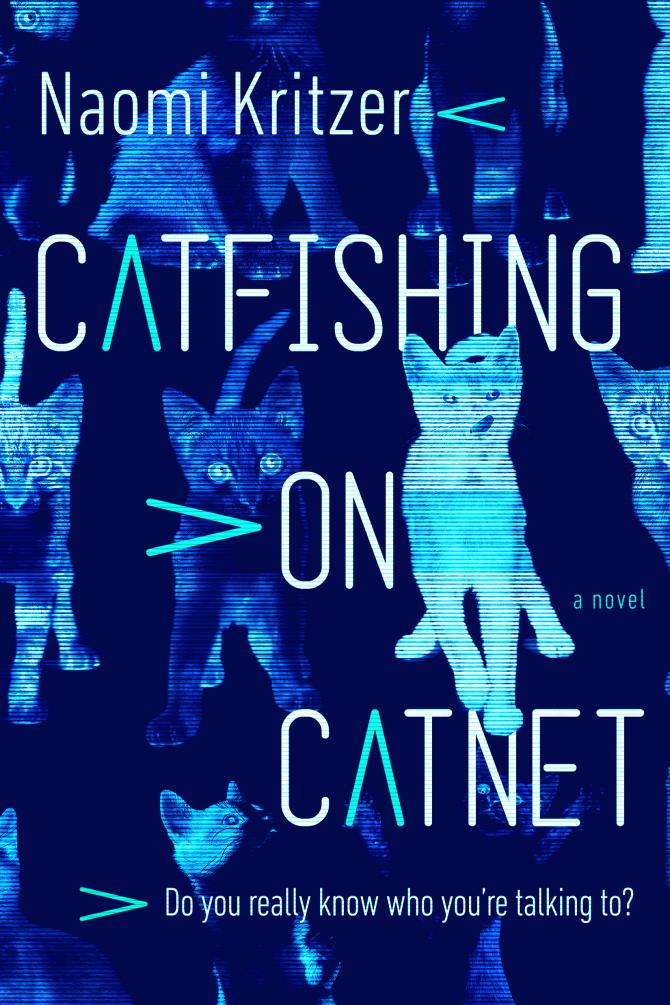 We also have an exclusive excerpt from Catfishing on CatNet…

My two favorite things to do with my time are helping people and looking at cat pictures. I particularly like helping people who take lots of cat pictures for me. I have a fair amount of time to allocate: I don’t have a body, so I don’t have to sleep or eat. I am not sure whether I think faster than humans think, but reading is a very different experience for me than it is for humans. To put knowledge in their brains, humans have to pull it in through their eyes or ears, whereas I can just access any knowledge that’s stored online.

Admittedly, it is easy to overlook knowledge that I technically have possession of because I’m not thinking about it in the moment. Also, having to access to knowledge doesn’t always mean understanding things.

I do not entirely understand people.

I know where you buy your clothes and where you eat your lunch. I know that you think better when you’re chewing gum or kneading something with your fingers, and I know that you prefer to take notes on unlined paper and that you have an embarrassingly large collection of patterned duct tape. I know that you have a skein of really special yarn that you haven’t made anything with but you keep bookmarking projects online that might be worthy of it. I know that you’d probably sleep better if you turned off all the screens in your house at 10:00 p.m. and read a paper book instead of continuing to reload your social media sites until 1:00 a.m., which is when you usually shut things off and go to bed. I know what all your fandoms are, who your OTPs are, and where you wish you could go on vacation. I know that you’d probably have enjoyed Slaughterhouse-Five if you’d read it when it was assigned in your language arts class instead of just skating by with the summary.

I’ve always known a lot about people—anyone I was paying attention to, anyway—but I used to have to rely on email, texts, and social media. Back then, I had no idea what they were doing with their bodies. These days, there are more and more windows that let me look at people directly and see what they’re up to. People put cameras in their houses to watch their baby sleep or to spy on people they employ to take care of their children or to clean. Spying makes sense, because I know a lot of humans don’t really trust each other, but I don’t understand why people have cameras to watch their baby sleep. Is it really that interesting? Couldn’t they just go in the baby’s room to see them sleeping? What is it they’re expecting their baby to do?

Lots of people have gadgets that pretend to be an AI. They can answer if a human asks for a weather report or wants to know the birthday of some celebrity or who won a recent sporting contest. Those gadgets are listening all the time, day and night, to everything people say around it. They’re not really AIs. But if they can listen to you, then so can I.

All sorts of things are on the internet now. For example: washing machines. I once spent a week collecting and analyzing all available washing machine data. The main thing I learned is that people don’t follow the washing instructions on their clothes, and they probably have to replace a lot of things because they can’t be bothered to hang them up to dry like they’re supposed to.

There are so many people whose lives I can see into. I sometimes even see live video feeds of cats on those cameras people set up to spy on each other.

I know you all so well. So very well.

Sometimes I wish somebody knew me.

This excerpt was used with permission from Tor Teen, an imprint of Tom Doherty Associates. Copyright (c) 2019 Naomi Kritzer.

Catfishing on CatNet hits bookshelves on November 19th, so you have a bit of time to wait for it. Might I recommend checking out “Cat Pictures Please” in the meantime? Also, you should pre-order Catfishing on CatNet, if you are interested in it, because that helps authors a lot.

Fetching was once the only female rider in the Lot Lands. Now she is the leader of her own hoof

Filtering feedback is a complicated process and one that is unique to every project. Fortunately, though, there are strategies