SNEAK PEAK: 1st Anniversary ALL FICTION, ALL COLOR issue of Amazing Stories. Plus – a review of FROZEN HELL and commentary on a review of The Future is Female anthology.

John W. Campbell Jr., a man I never had a chance to meet but one who greatly influenced my experience of science fiction, and someone about whom I’ve probably changed opinions at least a half-dozen times.

Today he was again brought to my attention by a review of Lisa Yaszek’s anthology The Future is Female in the New York Review of Books, and by the now completed copy of Wildside Press’ Frozen Hell, a recent offering, edited by John Betancourt and instantiated by Alec Nevala-Lee’s research for his Hugo Award Finalist (for Best Related Work) biography Astounding:  John W. Campbell, Isaac Asimov, Robert A. Heinlein, L. Ron Hubbard and the Golden Age of Science Fiction (which work itself is highly recommnended and my first pick on this year’s finalist ballot).

I’ll get back to Lisa in a minute.

Frozen Hell is an earlier, longer version of Campbell’s Who Goes There?, first published in Astounding in August of 1938 under the Don A. Stuart byline.  Who Goes There? is, of course, the story that would be made into the film The Thing from Another World, John Carpenter’s The Thing, The Thing (2011) (a prequel) and a humorous claymation take Pingu’s The Thing

(Disagreers, don’t be angry; I thought the remake of The Day the Earth Stood Still was atrocious and will no doubt have major issues with the remake of Forbidden Planet, if they ever get around to making it.  Spielberg’s War of the Worlds was terrible compared to Pal’s original…I could go on…. Historical firsts are a thing with me. Acquiring Amazing Stories might be a clue in that regard.) 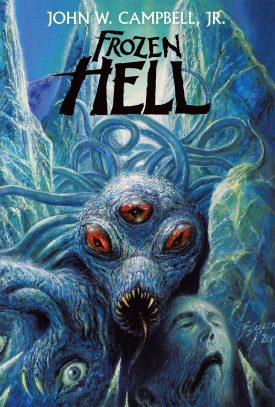 Having a great affinity for the original tale, the film and history itself, not to mention historical “firsts”, I was thrilled to learn that Nevala-Lee had uncovered an earlier version of this tale, and equally thrilled when John Betancourt of Wildside Press had started a fundraiser to bring it into print (a fundraiser I contributed to).

The result is a slim hardcover of excellent quality, featuring a fantastic wrap-around full color cover by Bob Eggleton (a favorite artist) and including interstitial chapter-heading illustrations.

With introduction by Robert Silverberg, a Preface by Alec Nevala-Lee and an expanded version of Campbell’s story.

I’d intended to read an original version of the story after completing Frozen Hell, but time constraints prevented the re-read of the original, and its starting to get a bit long in the tooth for this review.  So I’ll offer this:

While I don’t recall much difference between memories of the original and this version, it’s a fine read;  brisk, page-turning and edge-of-your-seat suspense throughout.  About the only jarring technological issue for modern readers would be the absence of genetic testing;  all else remains very plausible.  Silverberg does a fine job of reminding us of the story’s context and Nevala-Lee a fine job of covering the detective work and provenance of the story.  It’s as superb an example of a story about a story as you’ll find anywhere.

While some may consider this an historical oddity insofar as books go, the book itself is an exemplar of the publishing arts.  The cover by Eggleton shines!  You may be tempted to order the ebook version.  Don’t.  You’ll want to hold this book in your hands. 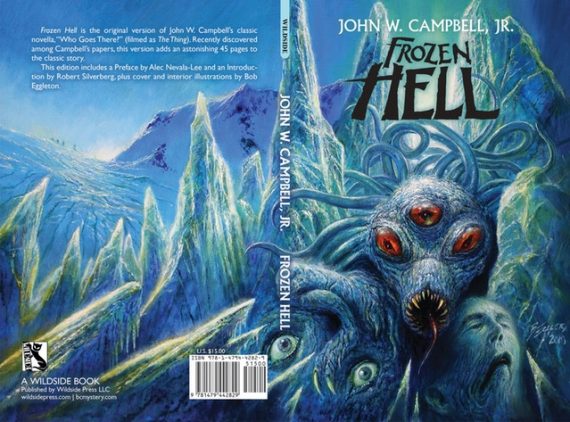 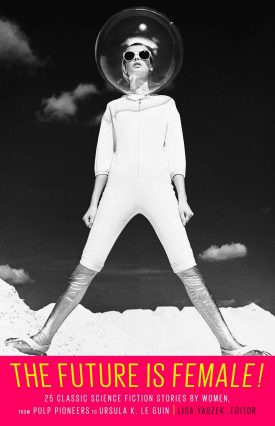 Now to Lisa Yaszek and her The Future is Female anthology’s review.  I’ve known Lisa for a couple of years now;  I was invited to address her university’s SF class and had a very enjoyable time answering questions about the history of the genre;  I also reviewed her previous anthology, Sisters of Tomorrow, The First Women of Science Fiction.

I don’t feel that the review does her latest any favors.  Essentially it concludes that Lisa is giving a pass to the past, at least in regards to repression and erasure and etc.

I don’t think that’s the point of the book; the point is to resurrect the influence they’ve had, to celebrate it, to remind and to provide an origin story for the women writing in the field now;  your works have not sprung forth from Gernsback’s forehead, but have a unique origin all their own. 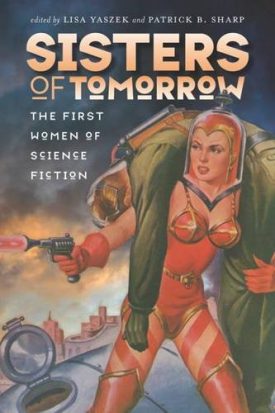 “Write me a creature that thinks as well as a man, or better than a man, but not like a man”.

The reviewer opens her piece with this quote and then goes on to state that Leslie F. Stones’s entry in the anthology answers this request and was perhaps the first to do so, years before Campbell spoke those words.

The prior exemplar, offered by Asimov, is, of course, Tweel from Weinbaum’s A Martian Odyssey.  The reviewer however, twists the usage of “man”, using it to specifically refer to males of the species, when, regardless of how Campbell used it, it is received as being representative of humankind, and then goes on to suggest that a female alien depicted in Stone’s story meets the requirement of Campbell’s request by behaving precisely as a petty man would behave.

It may have been an attempt at a humorous intro to the review, her take on it echoing her impression of the anthology itself (thus the accusation that the anthology gives past misogynistic behavior in the field a pass), but, if so, it struck me as defeating its own purpose;  what she illustrated was that the claim for a female first in this regard is false, requiring meaning and intent to be twisted in order to make it fit and undermining the very argument she’s trying to make.

Lisa is no apologist;  she’s doing excellent work in uncovering and (once again) making the contributions of female authors to the field prominent and available.  She seems to be trying to establish a solid foundation, one based on actual works and the direct experiences of their authors.  There’s not just one story to the history of female authors in this field.

The Third Part of the Double Dose

(Which has absolutely nothing whatsoever to do with the preceding.)

I really do appreciate the notes and messages that I get from people praising the Amazing Stories team for having brought this magazine back into regular publication.  Truly I do.  They’ve run the gamut from highly placed television execs, to authors and editors and artists previously associated with the magazine to former readers and subscribers.

They express wonderful sentiments: “we really appreciate the job you’ve done maintaining the magazine’s profile” to “it’s back?  I had no idea!  Thank you!”

Each and everyone of them is greatly appreciated and taken for what they are.

However, kind thoughts do not a story pay for.

If we are to continue this effort, we (unfortunately) need a bit more than good wishes*.

What we need are two things:

We need people to share their good wishes with others besides us.

The reviews we’ve gotten so far have ranged from “very good” to “excellent”, and those remarks have referenced the fiction, the non-fiction, the art and the layout of the magazine itself.  That’s by way of saying the in-house folks are not the only people who think we’re putting out an excellent magazine.

If you want us to be able to keep on doing that – subscribe, promote, review, and maybe consider nominating us for appropriate awards.

In order to help remind you of what you’d be supporting, below, you’ll find the cover and table of contents pages for our very first anniversary edition (Amazing Stories itself will shortly be having its own 94th! aniversary), a full-color, all-fiction, double-the-content edition. 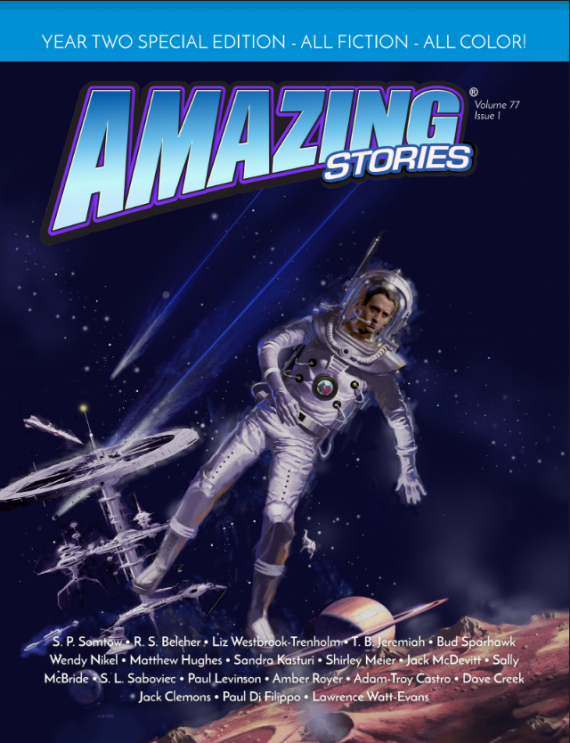 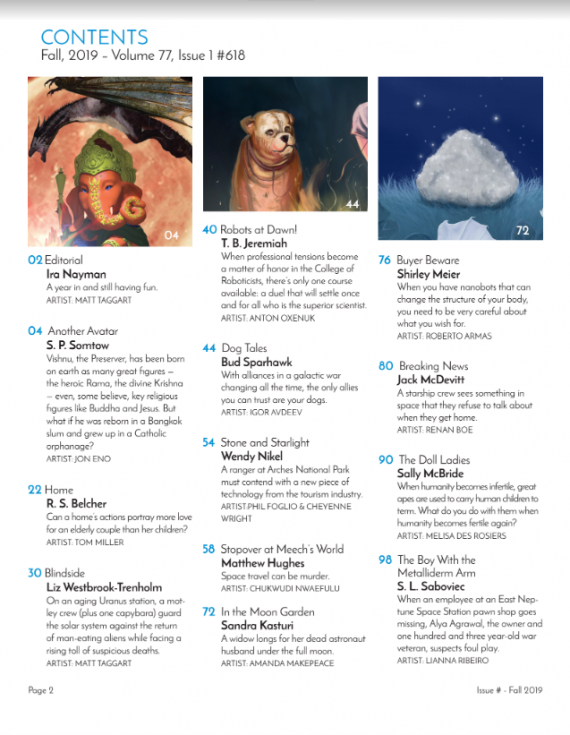 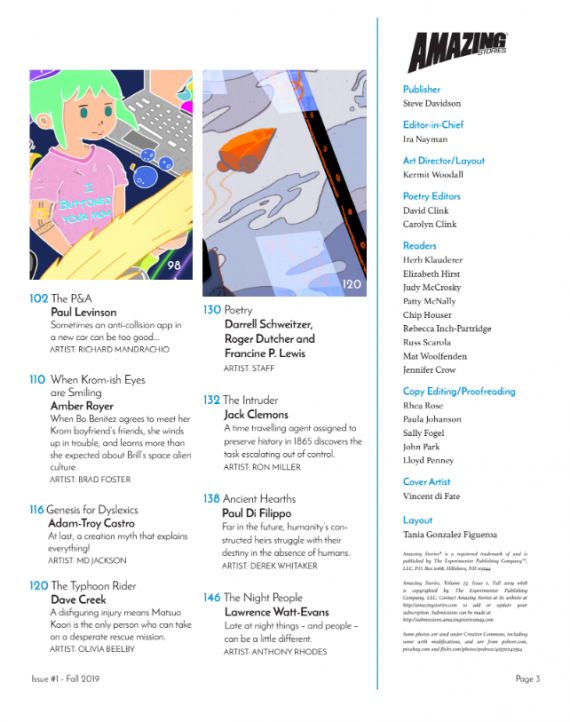 If you believe that having Amazing Stories alive and kicking is a good thing, a necessary thing, for our field and our community, please do what you can to help make that a reality – subscribe, promote, review, nominate (where appropriate and deserving) – and don’t stop sending us those notes of thanks either!

*I’d state here that this is not a warning of dire future consequences – but doing so will convince some conspiracists that it is, in fact just that.  It’s not, so we won’t make that statement.  We’re good to go for some time into the future.

Medical complaints and observations. Not for the squeamish.

Do you prefer “SF” or “Sci Fi”? Otherwise known as “someone is wrong on the internet and I’m going to fix it!”