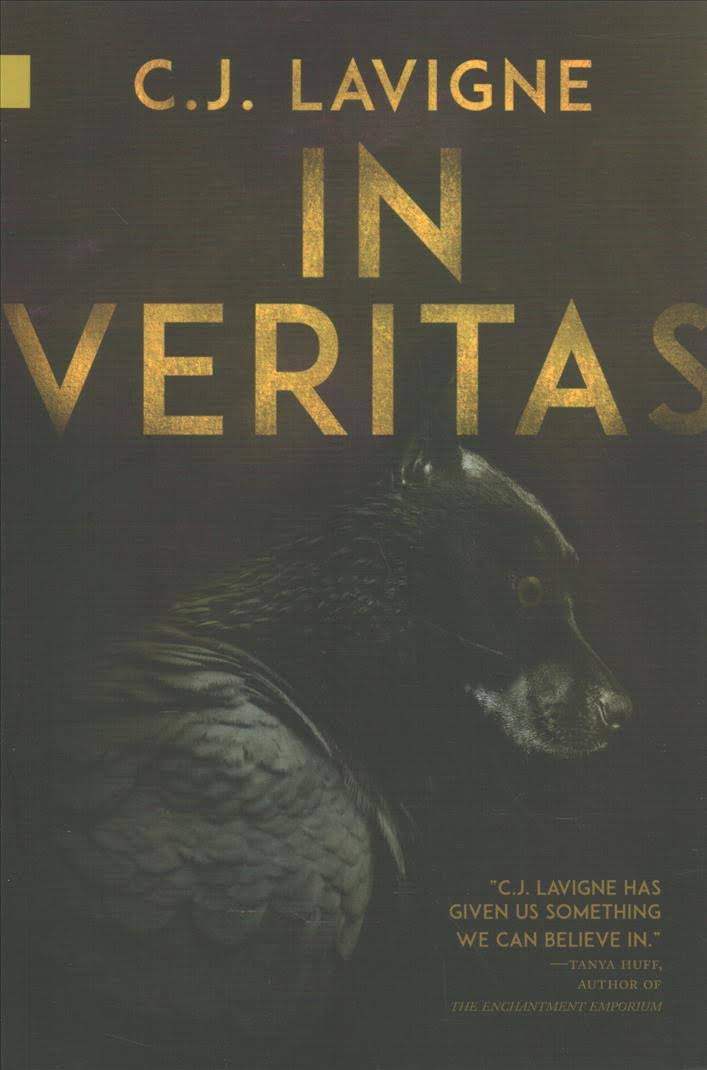 Verity is a young woman who has extreme difficulty coping with the real world. It doesn’t help that she is the only one she knows who can see dragons. Not even her boyfriend believes her. Now things seem to be getting worse. She is running into more and more people who are even worse off than she is. They are so different they make her seem normal and average in comparison. She is afraid of these strangers but feels drawn to them. Will they help her? Or destroy her? She feels compelled to find out.

This is a remarkable book. There is of course a conflict, a tension between characters, a definite plot with assorted twists and turns as you expect from a novel, but all of these things are revealed through intensive character studies. The emphasis is on characterization. The main characters are unique, each of them quite different from “normal” people. For the average reader there isn’t a protagonist to “identify” with and “relate” to as you share their struggle to overcome what plagues them. All of the central characters are simply too alien in thought and motivation to feel comfortable in their shoes. Many are supernatural in nature, or other-natural, or traumatized by a combination of ordinary and extraordinary experiences. Thus the character studies are a continuous process of revelation of the unexpected.

To put it another way, you don’t go through this book vicariously sharing the escapades of Verity or any of the other characters as if you are the character. Not at all. You are pulled through the novel like the proverbial fly-on-the-wall riding on character’s shoulders observing what’s happening with morbid fascination. In a sense it’s like a train wreck. You can’t take your eyes off the scene before you even for a second. That’s because the situational-awareness is so abnormal and unusual as to be utterly absorbing and addictive. Almost every paragraph contains something which surprises you. Sometimes every sentence.

In a way the book challenges the reader. The situation is often odd, and the description so weird and surreal, that it’s like a continuous rain of shocks seemingly designed to knock you out of the story. The literal-minded and pedantically inclined might be tempted to put the book down, even throw it away. But to anyone with even a smidge of poetic imagination the book is a visual feast, a veritable smorgasbord of new ways of looking at the world around you, looking with fresh eyes at things you normally take for granted.

Remember how Timothy Leary and the Hippies used to argue that drugs freed the mind to truly see that which is normally unseen because of the limitations of the conscious mind? I never believed that myself, despite my long hair and purple velvet bell bottoms back in that day. I was just a weekend Hippie (rest of the week trapped in High School) searching for some of that Free Love the CBC kept talking about (didn’t find any, alas). Nevertheless, had that theory been true, I imagine trippers would have perceived the world the way Verity sees it.

She is very sensitive. So much so that she continually suffers from sensual overload. A walk along a street, any street, amounts to a form of torture, yet a beautiful torture. A breeze makes the drab pavement sparkle. Office towers sound like windchimes. She smells noises. She can taste sounds, even individual words. “Love” tastes like oatmeal. “Magic” tastes like iron filings. Conversation is an ordeal for her. And looking at things, because everything she sees has a strong odour, but not what you’d expect.

Verity is rather like someone suffering from an extreme eidetic memory where everything they see and touch and smell triggers automatic memories each of which triggers more memories till the mind crashes under a tumult of impressions and images. Such people seek simple lives in isolated places where their brains can shut down as much as possible. Otherwise they go insane.

Verity has evolved, consciously or unconsciously, into a passive observer. She walks through life with kaleidoscopes in front of her eyes, so to speak, and needs to dampen down her sensory input through casual acceptance and non-reaction. The fact that “license plates on cars are a sort of brittle peppermint” or that she “can feel the traffic lights cool on my skin” she tosses aside as ho-hum moments not worth thinking about.

Not so the reader who is left wide awake and startled by the world she dwells in. It’s our world after all, Canada’s capital Ottawa is the setting, but an Ottawa like you’ve never seen or even imagined before. I find the description original and invigorating. In most books a character walks down a street for some basic purpose like getting from one place to another or in order to meet someone, and to allow a little introspection to reveal the character. Something prosaic. In this book stepping outside is like exiting an airlock to explore the surface of another planet. The reader has no idea what’s going to be revealed.

In Veritas is amazingly different from your average novel. I haven’t been this struck by a novel, in terms of being knocked off my feet, since I read Salvador Dali’s 1944 novel Hidden Faces a long time ago. Again, the culprit was description well out of the ordinary. Take the following example of Dali’s style of writing:

“Then Betka again cautiously shut the curtain, leaving it open just enough to be able to look outside, through the glass panes, at the sun—large, of a deep opaque red and slightly irregular roundness, like the clumsy contours and the thickly applied colour of the profaned and bleeding hosts painted with such awe by the minor masters of the school of Sienna. The rays of this fateful sun shed a light so materially scarlet and so dense that instead of light it seemed like a thick liquid soaking into and spreading over everything with a majestic and frightening malaise.”

Dali’s entire novel is padded with description of that sort. Hidden Faces is a splendid demonstration of Salvador Dali’s theory of “Paranoia Critical Method” in which everything is described (or painted) in such detail that object assumes an importance greater than it typically merits. Dali’s book is heavy-going but fascinating to read. Because nobody writes like Dali. His painter’s perspective dominated his very thoughts and how he expressed himself.

Fortunately, C.J. Lavigne is a thoroughly modern writer. Her description is not like Dali’s verbose style, but concise and telling, not to mention spritely and eye opening.

Another difference between Hidden Faces and In Veritas is that Dali’s characters are dull and boring, being constructs as ornate and over-detailed as his description of objects. Whereas Lavigne’s characters are sharply drawn, impressively complex, and powerfully desperate as only the doomed can be. They’re fascinating. They’re part of what drags the reader into the book, part of what makes the reader keep on reading even though it’s time to go to bed. I confess I wouldn’t want to meet with most of them, they’re definitely not the type I want to hang out with, I’m not sure I feel any empathy for them, I absolutely do not want to be them, but damn it, I want to know what happens to them and am prepared to keep turning the pages till I find out. Read the book in one sitting. That says something right there.

Like all great writers, Lavigne has the knack of describing something or someone in as few words as necessary. For instance, Jihan is “a woman who walks like a sword” and Colin “is the boy with the fractured smile.” And as for Verity, Colin tells her “I knew you were built strange. Everything hurts you, doesn’t it.” Dead on and cleanly accurate. Brilliant, I think.

In this review I haven’t really said anything about the premise or the plot. Why these other-naturals exist and why and how they interact is for you to discover. Rest assured it all makes sense, at least given the underlying historical premise and how things came to be as human civilization developed, not necessarily to the advantage of everyone. There is logic in the unlogic of In Veritas.

And given that every one of us has a bit of the other-natural inside us, and we all face the overwhelming sensory explosion of the modern world with less than perfect comprehension, we do in fact share the essential conundrum facing the characters in the book, namely how does one cope with the unendurable? Most of us manage to cope most of the time, or so we pretend. Perhaps the secret is to gaze upon the world with fresh eyes every time we step outside? I think Lavigne hints at that. Worth considering.

I believe this is C.J. Lavigne’s first novel. If so, it is a humdinger of a debut. Reading it was like discovering the joy of reading all over again. An exhilarating novel, despite the pervasive sense of Damocles Sword dangling, because the description and concepts elevate the reader’s mood above the potential fate of the characters. This be an amazing book.

Canadian readers, who are eligible to nominate this book to be on the final ballot for this year’s Aurora Awards, I unreservedly recommend you go to the Aurora Awards site and, if you have read In Veritas and like it as much as I do, nominate it. You have until April 24th to do so. It deserves to be among the five choices on the final ballot. No question.

Assuming it makes it to the final ballot, it will be part of a voter’s package to download and read, and hopefully more people will discover it and perhaps include it in their preferential votes.

No, I don’t personally know the author. I just happen to like In Veritas quite a bit. It’s a superb first novel. Highly original in style. And better than Salvador Dali’s first novel!

Heightened by the fears of the unknown, stories within the mysterious confines of space made for colorful entertainment and speculation, and Clarke used this tension to his advantage in Who’s There.