A bit of review, a bit of commentary on the latest MCU offering – Captain Marvel 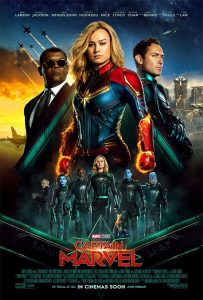 Despite the trolliing attack on Rotten Tomatoes (not to mention the vitriol being heaped upon nearly every Facebook page that mentions it) I decided that I wanted to see it, and not just see it, but take it in during the special day-before-release showing.  (The trolls seem to be incapable of understanding that their BS does not change behavior, at least not on the part of fans.)

The protest over this movie seems to stem from the actress Brie Larson’s public statements regarding her desire to see more diversity in the film industry (and, in particular, more representation among fim critics and reporters).

It also seems to stem from the fact that Captain Marvel is the MCU’s entry into the first female super hero lead category.

In that regard, I’d say I’d have to give the pole position to Wonder Woman; Gale Gadot has a better screen presence than Brie Larson, and it is kind of hard to top that scene in the trenches when Wonder Woman steps out into no man’s land for the first time, although there were a few moments in Captain Marvel that approached the same intensity. (Watch that hand closely boys! If it starts to clench, time to get out of dodge!)

Did I like it? Yes. Did I fall asleep during the showing? No. (I did nod off a bit during Wonder Woman, so, go figure.). Is the film worth all of the abuse that continues to be heaped upon it? No. Are they being whiney little man-baby bitches? Yes. Whiney bitches, not film critics. It helps to remember that.

I’d say that overall, this particular MCU film is not as intense as many of the others; there are moments when dialogue seems a bit awkward; when the fight scenes seem to undermine what we think we know of Captain Marvel’s capabilities, when Danvers, or Vers as the Kree have named her, seems to offer a psychological response that’s a bit off kilter, but

I think this is in some ways deliberate. Captain Marvel has a very convoluted and twisty origin story which includes the character not really knowing anything about herself. Her responses come across as confused-inappropriatenss, which is perfectly reasonable since the character is confused and has been thrust into new and unknowable situations.

It’s a subtle variation on the other origin stories we’re familiar with: Tony Stark’s over the top arrogance (I am Ironman); Peter Parker’s exhuberant adolescence; Black Widow’s pained inscrutability. In Captain Marvel, we have the “I’m not so sure what this is all about” version.

Captain Marvel is a solid entry in the MCU, forced, I think by necessity, to underplay itself because –

as avid credit watchers know, this film is central to the conclusion of The Infinity Wars. It just wouldn’t be fair to Infinity War’s conclusion if all of the sturm und drang had been packed into this one.

Which brings me back around to the trolls. They’ve chosen to attack Captain Marvel as if it were a stand alone property, but it most assuredly isn’t. Are they now going to diss Infinity War: Endgame because the Avengers are going to rely on Captain Marvel to help them out with their mess with Thanos? Are they going to try and convince us to skip Endgame?

Talk about shooting yourself in the foot: either they’re going to have to double down on Endgame, and miss a film they themselves have been clamoring for for years, or they’re going to shut up, see the movie and then gush all about it, revealing their truly hypocritical natures.

In my day, going to see a movie was a lot less complicated. You either liked it or didn’t, said so, and then went about your day. Nostalgia has its place.

I liked Captain Marvel. There. I said it. Now I’m going about the rest of my day.