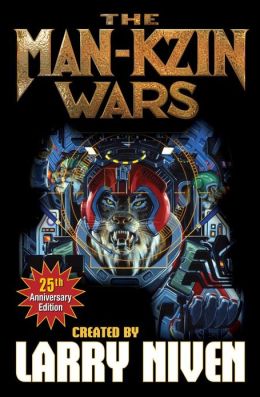 This is a reissue of the very first volume in the Man-Kzin Wars series created by Larry Niven and James Baen back in 1988. James Baen and Larry Niven conjured up the shared-world concept with the idea that numerous authors would try their hand with the very charismatic and extremely lethal feline warriors, the Kzinti. Niven himself has said that he didn’t want particularly to write military science fiction, but such was the demand to see more of these creatures, that he gave his go-ahead for the series. Some of the authors who have contributed to this series have been Poul Anderson, Dean Ing, Greg Bear, S.M. Stirling, Jerry Pournelle, and Donald Kingsbury.

This volume starts off with “Warriors” by Niven himself, one of Niven’s earliest published short stories from 1966. It’s a typical first-contact story where the humans barely survive, but do so by their wits. “Iron” by Poul Anderson details the quest for a ship, very ancient, from an unknown race that the Kzin also stumble across. This story is a short novel that has all of Anderson’s careful interrelationships between ship personal, particularly the military. Anderson, like Niven, is a writer from the Astounding Science Fiction/Analog mold, influenced by John W. Campbell Jr.’s sensibilities. The stories Campbell tended to publish in Analog were conundrums: scientists (or the military) faced with a problem and the stories detailed how they used their brains to think their way to a feasible solution. In other words, outsmarting the enemy. “Cathouse” by Dean Ing is another solution-based story wherein a young man is stranded on a planet where the Kzin are hunting him down. When Locklear comes across several female kzinti in suspended animation he risks his life by awakening one or more of them to help him survive. These female kzin are not of the same breed as the contemporary kzin and they are rather feisty and won’t take any guff from their brethren who are trying their best to kill Locklear.

You can’t have any more fun in a book than this. Niven’s Known Space universe is so fertile that it’s bred this wonderful series. They’re all for fun, but these stories are in the best Campbellian tradition of get-it-done and use-your-head science fiction. If you haven’t read the Man-Kzin entries, this is the place to start because this is the place it started.