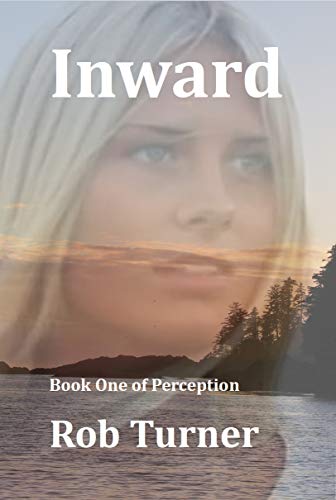 Imagine if Thomas Hardy were alive today and writing science fiction. Well, in the first novel, Inward (Book 1 of the “Perception” series), Rob Turner has written something that would not be out of place in the Hardy canon. It has a particularly English sensibility, but this is no rural idyll. Rather it is a domestic apocalypse, with a sense of the wider collapse of everything we know.

I say “domestic apocalypse” to mean both the ruin of society and its fabric and more intimate horrors, childhood sexual abuse in particular.

After what we assume is an environmental disaster, we are drawn into a small village surviving by earlier traditional means – hunting, blacksmithing, growing crops – with a few brave souls venturing out to scavenge in what appears to be left of society, The Ruins. Scrap metal, old machinery whose use has been forgotten, anything that might be used will be. But the dangers are many, from the harsh climates to more immediate dangers of marauding wolf packs.

The main character, Max, is a dwarf, who like Tyrian in “Game of Thrones”, is feisty and courageous with a romantic heart and a strong sense of justice. While out exploring the flooded Ruins, he encounters Trudie, who is hunting. In the course of the novel, Max, Trudie and her pregnant sister, Tammi, are forced to flee their village, pursued by locals who want them dead (for reasons that become shockingly clear late on in the novel).

They are hunted not only by humans, but also by wolves. They are also haunted by their past, and Trudie’s revelations about herself test Max’s love of her to the very limits.

Rooted firmly in post-apocalyptic science fiction territory, “Inward” also crosses lightly into more fantasy territory, through Trudie’s special power of perception (hence the title of the series). With it, she can inhabit the mind of others, even animals, perceive the world through their senses but also, to an extent, control them.

Throughout the perilous journey, Max, Trudie and Tammi have to fight not only their pursuers from the village, but the ravening wolves and, perhaps even worse, the bleak environmental conditions. The brilliantly-evoked landscapes (one of the stars of this great novel), is incredibly beautiful but also terrifying, unforgiving and with the potential to bring the group’s journey to a sad, frigid end.

In the closing chapters we enter more fully into science fiction territory, with an encounter which changes everything once more. I won’t say what it is, other than the fact that it adds yet another layer of intrigue and excitement to what has been an already mesmerising tale.

Apart from the story itself, it is Rob’s writing which claimed my attention. Without ever striving for effect, the author makes the novel spin through the mind like a movie, but one in which we can fully experience his characters’ emotions. Not a word is wasted, the writing so fluent and apparently easy, that I barely knew I was reading – it was more experiencing that looking at words on a page.

While I am not normally keen on multiple points of view within a chapter, Rob manages to succeed with the approach without breaking his stride. And of course, it completely appropriate given the central idea of the special power of perception.

I mentioned the affinity with the works of Thomas Hardy, but by the end I had a sense of another writer I greatly admire, Jack London, and this book has all the intensity and dangerous beauty of London’s most famous novel, “Call of the Wild.”

You can find more about Rob and his other work, including the other books in the “Perception” series, on his Amazon page.

In this week’s viewing: You wait and wait for a show that really makes you think, and then three show up all at once.