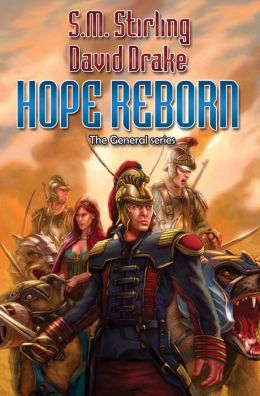 Military science fiction is a subgenre of science fiction that has long been the mainstay of Baen Books. True, Ace has Starship Troopers and DAW has Armor and St. Martin’s Griffin has The Forever War, but Baen has long since championed the military sf leanings of writers such as Lois McMaster Bujold, David Weber, David Drake, and John Ringo to such a degree that they’ve come to dominate the field.

And not without good reason. In most cases, as in the book under review here, Hope Reborn by S.M Stirling and David Drake is not only about battles and tactics, but it’s also about cultures and planetary societies wherein the petty ambitions of bureaucrats and (seemingly) minor characters can bring down entire empires. This is to say that the best of military science fiction tells of not only the soldiers and their battles, but the reasons why they are fighting. This is especially true if they are fighting for the wrong reasons or because someone higher up has an axe to grind or a political grudge to settle or because they woke up one morning and decided to ruin a bunch of peoples lives. (I’d say the last decade in American history bears witness to that.) These books aren’t just escapist fiction (though they certainly do entertain), but they have a greater resonance in today’s world.

To the work at hand. I was very pleasantly surprised by not only the depth of the actual story of Hope Reborn, but the actual quality of the writing itself. S. M. Stirling and David Drake couldn’t be more different as authors (and they’ve both written quite a lot), but their skills and moving a narrative along really shine here. Hope Reborn is actually two novels published much earlier. The Forge was published in 1991 and The Hammer was published in 1992. (There are two others in the series, Anvil, Sword, and Steel.)

The series concerns Raj Whitehall, a young noble, who uncovers an old Fleet Battle Computer that has survived centuries of disuse. His problem is that the Civil Government “employs” Raj to get involved in what seems like a simple mission, but is in reality part of a complex web of intrigue that does not put the Higher Ups in a good light. (The Governor of Bellevue is extremely paranoid, vain, and venal.) These books are part of a series called “The General” and like most works in this subgenre Hope Reborn is a rite-of-passage story made more subtle by the authors’ range of their understanding of both military and civilian culture. The various battles and intrigues–all of them very clever and some of them very unexpected–make up the core of these extremely well-written and unabashedly fun books. And really, the action never stops. I highly recommend them to you as they’ve come out in a tasty trade format that’s very easy to hold and lug around (they are, in other words, backpackable).

Let me say one last thing about Baen Books. For twenty years now Baen has been the absolute best publisher for bringing back into print classic works of mainstream science fiction (and mainstream fantasy) that have long been out of print. I did not read Andre Norton when I was young, for example. Now I can’t get enough. No other publisher (except perhaps Tor in an off moment) has such an aggressive reprint program. Plus, the covers are quite good. Baen is the Little Publisher That Could and I’m finding myself buying more Baen books than any other publisher at this moment. I don’t see myself stopping any time soon.

Steven Soderbergh’s Contagion is an effective film about an all too real possible Armageddon.

The Internet Is Watching You, and It Really Wants to Help: Naomi Kritzer’s Catfishing on Catnet