Science Fiction and Fantasy just go together sometimes, and I feel like they’re the perfect vessels for conversations involving gender. 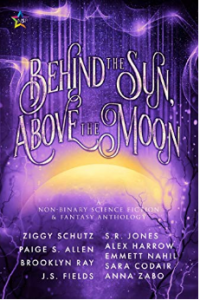 I’m always excited to find new-to-me authors in SF&F and I believe anthologies are one of the best ways to sample the work from a variety of writers.  Behind the Sun, Above the Moon is a recently released collection and I was delighted to interview some of the participants to learn more about their work.

The blurb (courtesy of NineStar Press):

BR: The spark behind the anthology was actually a conversation going around on Twitter about a lack of Non-binary representation in SFF. I replied to someone mentioning that plenty of people were writing in the indie and small press spaces, but that no one was willing to take a chance on them, reader-wise or editor-wise. I was met with the typical “if you want to see non-binary rep so bad, why don’t you do it yourself.” So I did. I curated, edited and contributed a story in Behind the Sun, Above the Moon, so I guess you can say pettiness is the reason it exists. I came up with the idea of using space as a vehicle for magic, because it’s always been magical to me. Science Fiction and Fantasy just go together sometimes, and I feel like they’re the perfect vessels for conversations involving gender.

VS for ASM.: Perfectly valid reasoning in my opinion! I’m glad you did take up the challenge. Who did the terrific cover?

ASM.: And now for a few words from specific authors about their story in the collection!

Alone on a desolate mining ship, a seemingly isolated astronaut must face the ghosts of a queer past, present, and future to find salvation in a distant star cluster.

Inspiration for the story: I’ve always had a strong affinity for ghost stories, and to me, the ghosts of past, present, and future, are extremely interesting symbols. Past, Present, and Future can be used to represent pretty much anything, from the zeitgeist of an entire era to times in one’s personal history. Marginalized folks are continuously looking towards where we’ve been, trying to assess where we are now, and striving to find hope for a future, so those same ideas of a transgender past, present, and future emphasize the persistence and continued existence of non-cis identities throughout history. Also, I’m a Dickens nerd who thinks a Christmas Carol is a spectacularly spooky story, and wanted to riff on that without making it too blatant.

I don’t have another book out in the world yet, but I am a co-writer and co-producer on a futuristic noir-thriller video game. It features cyborgs fighting gods in a sleepless cyberpunk city, so if you like my particular brand of weird sci-fi allegory, you’ll love Farah’s storyline in Love Shore. Plus, I get to write a nonbinary companion character named Jo, who loves conspiracy theory and alien hunting! Always a bonus.

Next on To Be Read list: The Poppy War – R.F. Kuang, In The House In the Dark of the Woods – Laird Hunt, Docile – K.M. Sparza

Inspiration for the story:  Ink and Stars was inspired by my own experience with tattoos (and my amazing artist Austin Huffman who happily answered all of my nerdy questions about how tattooing works and evolved throughout the years). Before Chaz’s character was even fully formed, I knew that I wanted them to have magic that is linked to their art and that played on the idea that getting a tattoo isn’t a one-way road of just receiving art on you, but that the recipient also gives a part of themself over to the artist and boom! Magic happens. The fact that Chaz is a Weaver and uses tattooing to basically cross-pollinate the universe with bits of their magic infused in art was just the next logical step!

I came up with Liam’s character after an editor tweeted in 2016 that they really wanted to see a “female James Bond who is a total womanizer.” That idea took seed in my brain and I went “Okay, but what if we step this up and make this person non-binary, an ex agent, and very much polyamorous while they’re doing their own thing after the government they worked for failed them spectacularly?” And hello, Liam Morgenstern popped up. Chaz’s character came later and was basically inspired by my love for all things tattooing and Fullmetal Alchemist because I wanted to see a tattoo artist who uses magic in the style of Fullmetal Alchemist but in space. 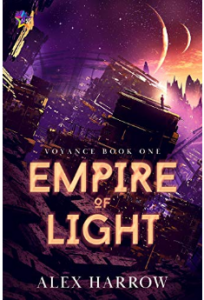 If you love gritty space adventures, characters full of snark, and queer found families, check out my science fiction debut, Empire of Light. It’s basically Gay Firefly with magic about an assassin who will set the world on fire to save the guy he loves. You’ll love Empire of Light if you love near-future science fiction, enemies-to-lovers stories, lots of snark, and complicated relationship dynamics, and fast-paced twisty plots.

Next on TBR list: An upcoming release I’m super excited for–and yes, this is a cheat because I just read an ARC–is K.M. Szpara’s Docile, which honestly was the best, but also most difficult thing I’ve read in a while. Definitely heed the content warnings but the way this book handles consent in connection with capitalism is still sitting with me even after having finished the book. Highly recommend.

A queer science fiction YA I can’t wait to get into is Emily Skrutskie’s upcoming Bonds of Brass, which combines so many of my favorite things: space opera, fraught history, complicated love interests, and ethical conundrums. And really, I’ve loved everything else Emily writes, so bring it on!

As chief security officer in the Lunar Guard, Enzi is in charge of the security for their sister’s coming of age ceremony. A fragile relationship with their family doesn’t make keeping Ulsa safe any easier, and neither does a group of pesky drones or a hidden plot to overthrow their sister’s place in the family.

Inspiration for the story: When I want to write something short but don’t have any ideas, I use a random word generator to produce three words. That’s how I originally got the idea for Death Marked, but none of the original three words made it into the final draft. I also thought this story was going to be a loud pulpy battle with giant robot assassins, and instead, it turned into something deeper and quieter about two siblings rekindling their friendship at a royal party. There are still robot assassins, but they are tiny and sneaky. 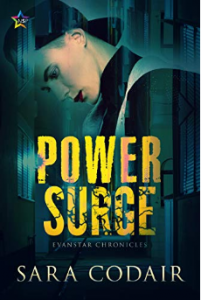 Power Surge because it is the book of my heart about messy, angsty demon hunters figuring out their feelings for each other while trying to stop the apocalypse. It has a nonbinary main character!

Readers who enjoy adult, character-driven speculative fiction will enjoy my space western, Red Tide Rising, which was published in Gunsmoke and Dragonfire.

Next on TBR list:  The Wolf and the Sparrow by Isabelle Adler, Cemetery Boys by Aiden Thomas, and Sword in the Stars: A Once & Future Novel Cori McCarthy and Amy Rose Capetta

For thirty seconds every night, a disembodied specter named Mette visits with Orin, who has long since written the ghost woman off as a recurring dream. But when Mette suggests meeting in real life, Orin’s inner world turns out to be more substantial than imaginary, and xie embarks on a journey to discover the truth of Mette and their strange connection.

Inspiration for the story: I’ve always loved a good ‘mind-sharing’ story, since I reading Being of Two Minds by Pamela F. Service back in grade school. I’d long wanted to explore that idea, but in a more fantastical setting, and really explore what that kind of connection would do to a person, psychologically, through the years. 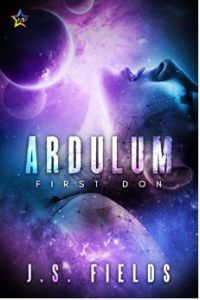 Ardulum: First Don is the first in my four book ‘lesbians in space’ series. A space opera with a dash of actual science, lovers of Firefly and other trope-based space sci fi will feel right at home. The series was a finalist for the Foreword INDIES award in science fiction and the Gold Crown Literary Society’s award in science fiction.

Next on TBR list: Record of a Spaceborn Few by Becky Chambers, Harrow the Ninth by Tamsyn Muir, The Queen’s Bargain by Anne Bishop

Behind the Sun, Above the Moon also includes the following stories:

From Dusk to Dying Sun by Paige S. Allen

The Far Touch by S.R. Jones

Weave the Dark, Weave the Light by Anna Zabo

When you write, capturing the urgency of the moment, your own voice and style, happens in the first contact of pen to paper, fingers to keyboard, and with each re-working of the text,