In Planetfall, author Emma Newman introduced readers to a world in which space colonization was enabled by 3D printers that could produce almost anything. Within the story of exploration and first contact was another, much more personal narrative about perspective, mental health, and personal trauma. With Before Mars, Newman does the same thing closer to Earth, following geologist and artist Anna Kubrick onto a Mars colony set up for both scientific research and a reality show.

Before Mars is the third book in Newman’s Planetfall series, but acts as a standalone if you’ve yet to read the other entries in the series. The book follows Anna away from her husband and baby back on Earth. When Anna finds a note seemingly from herself telling her not to trust the colony’s psychologist, she starts to wonder what is real and what is not. Is Anna caught up in a corporate conspiracy or is she losing her mind?

The question is a complicated one. Anna’s family has a history of not always being able to trust their own eyes. She also lives in a world where hyper-realistic, “immersive” virtual reality can be manipulated by implanted artificial intelligence to create recorded or fabricated scenes that look and feel real. Is it paranoia if they’re really out to get you? The question drives her investigations on Mars, where mysterious messages and strange behaviors from the crew indicate that something strange is going on. 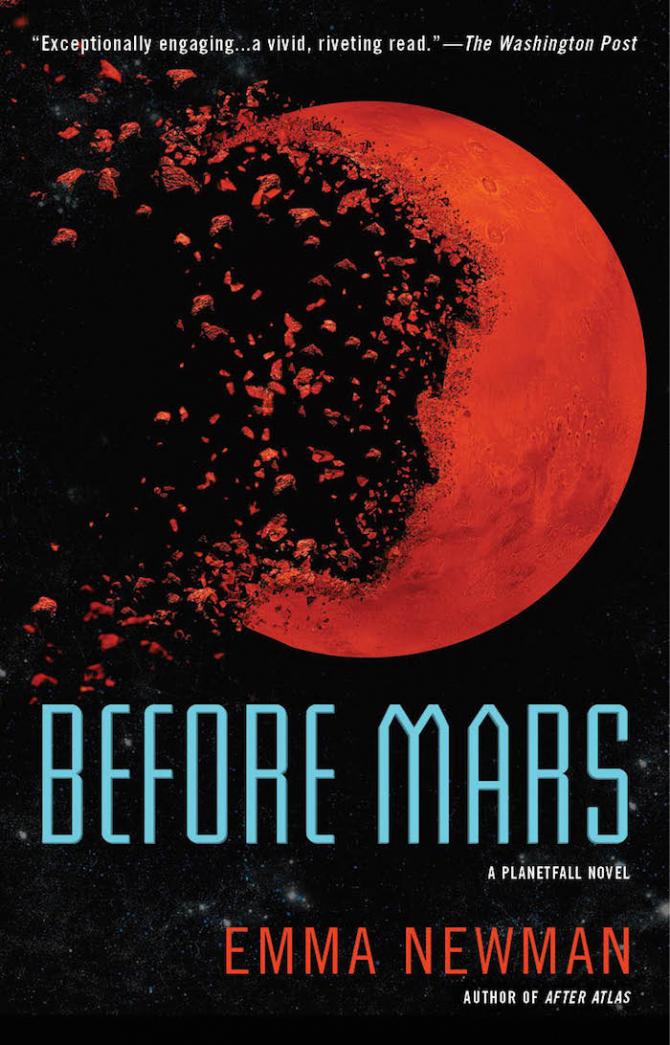 Anna’s first-person point-of-view creates a feeling of claustrophobia and anxiety, her deep wells of emotion for her family held at a distance by her traumas and pragmatic personality. Her thought processes are expressed with an impressive level of detail and honesty; Newman has a knack for including why characters feel things in a way that feels natural, tracing their feelings back through memory. That honesty also ties directly into the mystery and keeps the reader guessing. At times, Newman’s symptoms sound like imposter syndrome, or anxiety—but what are the difference between those and investigative observation when something might really be going on? These themes explored within Anna’s characterization are fascinating and inextricably tied to the larger story.

While the science of the Mars mission (including the aforementioned printers) isn’t the focus of the story, Newman explores many technologies and political structures extrapolated from today’s. Corporations in her near-future world have grown to become governments. The calmness with which characters discuss things like pay grade-assigned housing is chilling in its own way, and starkly highlights what would happen if some of the capitalist structures of today were written out into law. Other consequences of this are louder and more shocking: a clause in the system allows for slavery in all but name. Before Mars explores this aspect of the possible future with gravitas and clear vision. Social consequences are explored as well—gender roles have been largely scrubbed away, but married people have an advantage from a corporate finance standpoint because government-corporations consider them “more predictable.”

The characters inhabiting the space station are diverse and vivid, defined strongly by their relationships with one another. Anna arrives into what is clearly a web of complex interpersonal relationships, and the process of her integrating with (some of) the members of the crew provides an immediate hook. At times, characters don’t act in what appear to be rational ways or in their own best interests, including Anna, and this adds an impressive level of realism.

Because all of the characters are stressed and seen through Anna’s relatively focused perspective, it can sometimes be difficult to tell whether their characterization is fleeting or an intentional result of the Mars station’s stressed atmosphere. None of the crew members felt poorly drawn—each have their own history revealed quickly or slowly—but nor did they feel as complete as Anna. Like the people in Anna’s paintings, they have just enough of a sense of depth to add to the art. Readers looking for an ensemble piece instead of a character study will not find it here.

Anna herself is treated with careful attention. Often when reading books with flashbacks I find myself frustrated by the way scenes are held in reserve to create tension, widening the distance between the characters and the reader because the author withholds the main character’s complete history. However, Anna’s flashbacks work well to maintain suspense, and she has good reason not to want to remember some of her history.

One of my favorite moments in the book comes when Anna drives on the surface of Mars for the first time and sees the often-illustrated landscape; she expects to feel overwhelming wonder, and so is instead disappointed when she feels the same as she has inside. Her self-destructiveness and uncertainty are portrayed as deeply human but also without sappiness or pity; the text leaves the reader some room to judge her, and then encourages them to be gentle inside that space.

Although the main story isn’t a romance, the book also comments in interesting ways on marriage and relationships. At times it reminded me of Grass by Sheri Tepper, in which a woman displeased with her cold and convenient marriage finds herself enamored in many ways with a dangerous alien ecosystem instead. Newman’s impression is a bit more in favor of humanity. Institutions in this book are both restrictive and full of the excitement of exploration, and love is an institution as certainly as the government-corporations are.

Pulling a book with this many neatly-organized themes together into a satisfying ending is undoubtedly difficult, and some of Anna’s concerns are not so much dropped by the wayside as carried in pockets instead of out on the open. The ending slumps, but the mystery up to then is fantastic. It works on many levels—as a thrilling science fiction mystery, a societal critique, and a character study.

Buy Before Mars by Emma Newman

A chat with Jenni Hendriks and Ted Caplan about their new novel, Unpregnant,

It’s called Panspermia and it’s not a new theory

Sunday’s News and Features Will Return