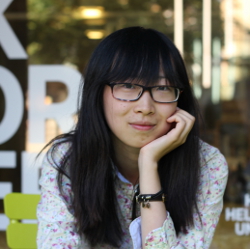 Regina Kanyu Wang is a science fiction and fantasy fan from Shanghai, China. She co-founded SF AppleCore, the largest and most active fandom in eastern China. SF AppleCore held Shanghai SF&Fantasy Festival in 2009 and annually since 2011, which was co-organized and enjoyed by all university science fiction clubs in Shanghai. Since October 2013, AppleCore have been organizing the monthly event, AppleParty, which attracts more graduated fans outside of universities. AppleParty is a small scale gathering together with theme discussion, movie screening or short talks.

Regina is also council member of World Chinese Science Fiction Association (WCSFA). WCSFA targets at uniting all Chinese science fiction writers, editors, publisher, artists and fans. The Chinese Nebular Awards have been awarded by WCSFA every year since 2010. The awarding ceremony of the Chinese Nebulars is one of the two major national events of Chinese science fiction. The other one is the Galaxy Awards’ awarding ceremony, which is organized by Science Fiction World magazine.

Since 2013, Regina has been active in attending international fandom events. She was at Finncon 2013 in Helsinki, Unicon 2014 in Riga, Loncon 3 in London and Shamrokon in Dublin. She has also visited fandoms in the Nordic and Baltic countries and have more contacts outside. She is working on building a bridge over the gap between the Chinese and international fandoms.

Regina is also a writer. She has published a book on traditional Chinese cuisine in Shanghai and Suzhou, as well as several science fiction short stories for children. She has a bachelor’s degree in business administration and a master’s degree in creative writing. Her graduation works for the master degree programme is a science fiction novella. Unfortunately, most of her writings are in Chinese and haven’t been translated into English yet.