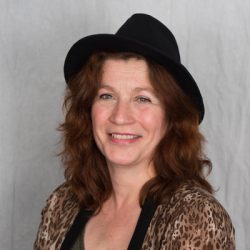 Rebecca Inch-Partridge wrote her first novel in 3rd grade, Saver Rebecca Meets Captain Kirk. She grew up wanting to save the world and wanting to be writer. Then life happened. She went to work on an ambulance as an EMT, got married and had a family. She went back to school for her bachelor’s degree when her son entered middle school. Rebecca then served as a service coordinator at Alta California Regional Center for several years.

Then she almost died from stage four endometriosis and that changed everything. Writing was no longer just something to be done in her spare time. It became a way of life. She discovered that she loved meeting with other authors at writer’s groups, conferences, and conventions. She is now a frequent panelist for area Science Fiction conventions such as BayCon and LosCon. Her experiences at these events served as the inspiration for her story “Nontact,” which will appear in Nova Science Fiction Magazine.

Giving and getting literary critiques has always energized and inspired her. Now she works as a freelance editor who specializes in speculative fiction, mysteries, and memoirs. She loves helping authors form diamonds from lumps of coal. She lives in Auburn California where she leads several critique groups for Gold Country Writers. She is also a member of the Foothills Storytellers Guild and co hosts Open Mic for the Spoken Word each month.

Born in 1947, Steve began reading SF under the guise of Frank Hampson’s “Dan Dare” in the weekly boys’ newspaper The Eagle in Britain in 1953. He entered fandom in 1973 with the creation of a “Free University” class at Washington State University, which morphed into the local fan group PESFA. Steve and his best […]

Up until her senior year in High School, the closest Jane had ever gotten to what people call fantasy or science fiction literature were stories by Poe, books like Mysterious Island by Jules Verne, and My First 2000 Years (Viereck and Eldridge), part of a “short list” of books whose claim to fame were that […]