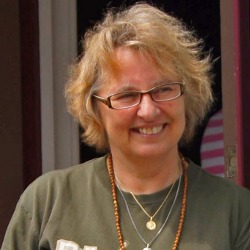 Nina Munteanu is a Canadian ecologist and internationally published novelist of science fiction and fantasy. In addition to eight published novels, Nina has written short stories, articles and non-fiction books, which have been translated into several languages throughout the world. Recognition for her work includes the Midwest Book Review Reader’s Choice Award, finalist for Foreword Magazine’s Book of the Year Award, the SLF Fountain Award, The Delta Optimist Reviewers Choice and the Aurora Award, Canada’s top prize in science fiction.

Nina regularly publishes reviews and essays in magazines such as The New York Review of Science Fiction and Strange Horizons. She serves as staff writer for several online and print magazines, and was assistant editor-in-chief of Imagikon, a Romanian speculative magazine. She is currently an editor for Europa SF, a zine dedicated to informing the European SF community and edits for several publishing houses.

Nina teaches writing at the University of Toronto and George Brown College. Courses use her award-nominated guidebook “The Fiction Writer: Get Published, Write Now!” (Starfire World Syndicate). The textbook was adopted by several colleges and universities throughout North America and Europe; it was translated and published by Editura Paralela 45 in Romania. “The Journal Writer: Finding Your Voice” was released in winter of 2012 in Romanian by Editura Paralela 45 and in English in early 2013 by Pixl Press.

Nina’s novels and novellas include:

Nina has coached writers to publication for over two decades. Her site Nina Munteanu Writing Coach provides writing tips, publishing information and details on her coaching.

To find out more about her writing and projects, including a complete list and description of her publications, visit Nina Munteanu Writer. Visit SFGirl Reviews for an extensive database of reviews and critical essays on literary works, movies and TV shows Nina has critically assessed.