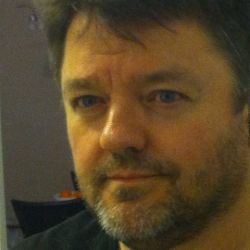 Since then, he has become considerably poorer, but he has grown much happier.

When he is not writing technical manuals, newspaper articles or online features, he is working on any one of his many unfinished novels or saving stray cats from the street.

His first short story, “The Rest Was Easy,” was published by the online literary magazine Amarillo Bay in 2013.

He lives in Quebec, Canada.