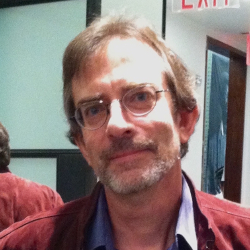 Jeffrey J. Mariotte has written more than seventy books, including original supernatural thrillers River Runs Red, Missing White Girl, and Cold Black Hearts, horror epic The Slab, and the Stoker Award-nominated teen horror quartet Dark Vengeance. Other works include the acclaimed thrillers Empty Rooms and The Devil’s Bait. With his wife and writing partner Marsheila (Marcy) Rockwell, he wrote the science fiction thriller 7 SYKOS and Mafia III: Plain of Jars, the authorized prequel to the hit video game, as well as numerous shorter works. He has also written novels set in the worlds of Star Trek, CSI, NCIS, Narcos, Deadlands, 30 Days of Night, Spider-Man, Superman, Conan, Buffy the Vampire Slayer and Angel, and more. Three of his novels have won Scribe Awards for Best Original Novel, presented by the International Association of Media Tie-In Writers. He’s also won the Inkpot Award from the San Diego Comic-Con, and has been a finalist for the Bram Stoker Award from the Horror Writers Association, the International Horror Guild Award, the Spur Award from the Western Writers of America, and the Peacemaker Award from the Western Fictioneers.

He is also the author of many comic books and graphic novels, including the original Western series Desperadoes, some of which have been nominated for Stoker and International Horror Guild Awards. Other comics work includes the horror series Fade to Black, action-adventure series Garrison, and the original graphic novel Zombie Cop.

He is a member of the International Thriller Writers, Sisters in Crime, the Western Writers of America, Western Fictioneers, and the International Association of Media Tie-In Writers. He has worked in virtually every aspect of the book businesses, as a bookstore manager and owner, VP of Marketing for Image Comics/WildStorm, Senior Editor for DC Comics/WildStorm, and the first Editor-in-Chief for IDW Publishing. When he’s not writing, reading, or editing something, he’s probably out enjoying the desert landscape around the Arizona home he shares with his family and dog and cats. Find him online at www.jeffmariotte.com, www.facebook.com/JeffreyJMariotte, and @JeffMariotte.

David Kilman writes humorous science fiction in addition to his Scide Splitters blog at Amazing Stories Magazine.   He is a member of the Northern Colorado Writers Workshop.   Dave grew up in the pseudo space age and thought that he would be living on Mars by now.   Instead, he lives in Colorado Springs […]

Adria Fraser was born in Vancouver B.C. She holds degrees in Psychology and Social Work and a diploma in music with a major in Classical voice. She has been writing since she was eight and has published poetry and interviews, columns, reviews and editorials in various magazines, newsletters, etc. Since her retirement as a psychotherapist […]

Review: I Am Scrooge: A Zombie Story for Christmas by Adam Roberts