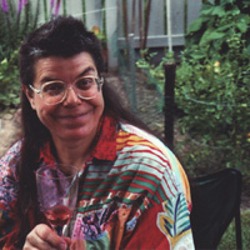 Four of her chapbooks have been published by independent small presses: Out of the Black Forest (Centennial Press, 2012), Constellation of the Dragonfly (Plan B Press, 2008), Aqua Regia (Parallel Press, 2007), and Sauce Robert (Pavement Saw Press, 2003).

She is the editor of Star*Line and the poetry editor of Mobius: The Journal of Social Change.

She has no literary academic qualifications, but is kind to those so encumbered.