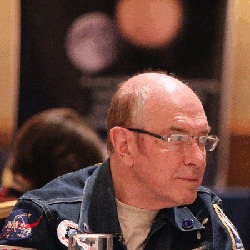 David A. Hardy is the longest-established living space artist having produced his first astronomical work around 1950..

He continues the traditions of scientifically accurate portrayals of space and astronomical objects first pioneered by Chesley Bonestell. His works can be viewed and purchased on his website http://www.astroart.org.

Luis Cermeño is a science fiction and fantasy writer born in Saravena, Colombia, a little young village near the Venezuelan-Colombian border. Most of his life he lived in Bogotá. No matter where he has always felt like an alien robotic life form. Luis has published with the Colombian editor NORMA Noches de Oriente (2009). He […]