Space Specter examines fear as both motivation and threat. If I discuss this too much, I’ll spoil the plot of the novel. 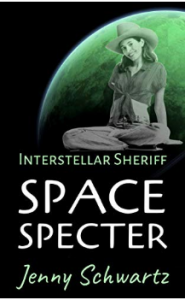 I’ve known Australian author Jenny Schwartz since my earliest days of being published myself and I’ve watched her career with great interest. She’s not afraid to try new things and to mix up the genres and tropes. Her Interstellar Sheriff series seemed to really resonate with readers in 2019 and now that book 3, Space Specter, has been released, I thought it was the ideal time to ask her a few questions.

The blurb: The Saloon Sector is the Federation’s official frontier, but beyond it lurks the Badstars. Bandits hide there. The Saloon Sector is Sheriff Max Smith’s territory. Since the revelation of his secret identity, life has changed for Max and Thelma. Their relationship is under increased pressure.

Alone in hostile territory and separated from their allies, Max and Thelma couldn’t be less prepared for their encounter with the legendary specters.

But it’s not the specters who’ll betray them.

Veronica Scott for Amazing Stories Magazine: What was the spark or plot prompt behind the Interstellar Sheriff series?

JS: I wanted to write a 1950s inspired space opera. So much of what we hear, today, is depressing. Writing a fun adventure where the good guys are guaranteed to win felt like a mood boost for me and for everyone who’d read it. In the 1950s people were scared of atom bombs, but media gave them optimistic escapism. Being a storyteller is a great gift. Using it to bring hope feels like honouring that gift.

VS for ASM.: What do you think the appeal of a Wild West theme is to science fiction romance readers?

JS: The frontier is the realm of possibilities. Star Trek famously described space as the final frontier. Like the future, it’s where we can imagine anything.

Plus, the galactic frontier is such a massive canvas that characters can be larger than life and still feel real. Intense heroes, spectacular heroines, blazing passion. I also love that there’s room for quirky side characters.

VS for ASM.: What were your three major influences or inspirations when writing Space Specter? (And we’ll note for our readers that you use the predominant British spelling of the word as opposed to the American ‘spectre’.)

JS: Two of the three major influences for Space Specter are alluded to in the title. “Specter” has two meanings. The first is ghost. The second is the fear of something bad happening, e.g. the specter of famine stalked the land.

So my first inspiration for Space Specter was to explore encountering “the other”. This is a recurring theme for my speculative fiction, whether encountering aliens or artificial intelligences in space, or werewolves or other supernatural beings on Earth.

Love is risking ourselves to embrace the other. It’s such a dangerous undertaking, and also the pinnacle of human experience. We exist in a web relationships, each of which reveals some new aspect of ourselves. Fiction is a medium to explore taking the realities of ordinary life and stress-testing them to see what they mean. When “the other” is truly other (not simply another human) we expose in stark terms our fears and courage in walking the difficult, rewarding path of respecting another’s otherness.

Space Specter examines fear as both motivation and threat. If I discuss this too much, I’ll spoil the plot of the novel. I’ll settle for saying that fear, and how we choose to respond to it, is a theme woven into layers of the story, both personal and societal. That’s the thing about science fiction: it may seem as if it’s happening somewhere (or somewhen) else, but in fact, it addresses current and existential issues.

My third inspiration while writing Space Specter was Disney. For decades this corporation has understood the power of fantasy.

How we understand our world isn’t defined solely by our sensory experience of it. How we believe the world works shapes our perception of it. Or to say that a different way, our lives are the stories we tell ourselves.

Disney is a powerhouse because it taps into our collective unconscious to tell the stories that we want to believe are true. That validation of a positive approach to life then supports us telling ourselves optimistic stories, which is why we treasure Disney’s stories. Even if the stories are of talking dogs or fairy princesses, those outer trappings don’t disguise the heart of the stories. Good triumphs over evil, love is requited, friendship is unbreakable, self-sacrifice is honoured, family forgives all, everyone has a home. These are modern fairy tales. These are the values we want for our society.

Space Specter might be set in space, but Thelma and Max’s adventures resonate with readers’ lives here and now.

VS for ASM.: Is there a TV show or movie you’ve recently binge watched and what do you like about it?

JS: You’re probably expecting me to gush over the ‘Mandalorian’, but I’m going to choose a documentary instead, ‘From Russia to Iran: Crossing the Wild Frontier’ (https://www.bbcstudios.com.au/shows/levison-wood-from-russia-to-iran/ ). Levison Wood walks the Caucasus Mountains encountering the people, ruins and stunning wilderness of the region with an openness to the experience that celebrates the power of the frontier. There is conflict (heartbreaking stories of war and suffering, and the scars of it) and the struggle to survive, but there is also the independent, gloriously stubborn spirit of its people.

On the frontier you can’t run away from life. The frontier is where humanity shows its strength—of purpose, of honour and compassion, as well as our vulnerability to Acts of God and to violence.

VS for ASM.: Clearly your fondness for the frontier runs deep! I’ve been fascinated by your fearlessness when it comes to changing the covers on your books. Can you share a bit of your process with our readers? I know some of your books have gone through an evolution of covers – what inspires you or prompts you to revise the cover of an already published book?

JS: These days I make my own covers. I love the process. Manipulating images rather than words helps to unlock how I’m thinking about a book. Once the book is out there, I still play with its cover, often as a result of feedback from readers.

When I started the Interstellar Sheriff series, the cover for the first book, Space Deputy emphasized the book’s 1950s vibe. Then I played with the idea of the Wild West, before trying some more generic space opera styles, and finally, ending up with the heroine laughing at the camera in front of a planetary background.

The covers for the series differ from the spaceships and bare chests of many science fiction and science fiction romance novels, but I like the friendly approachability of the final design. For me, that reflects both the optimism of the novels and their emphasis on relationships. A number of readers have commented favourably on the fade-to-black romance scenes, so the family-friendly covers emphasise that aspect of the novels.

VS for ASM.: Jenny has been kind enough to share the evolution of Space Deputy covers with us:

JS: I’m wrapping up my post-apocalyptic Earth fantasy series, The Faerene Apocalypse, in April with Rough Magic  that will occupy me for the rest of the year. The Uncertain Sanctuary series is science fantasy, with Baba Yaga’s great-granddaughter, Dr. Kira Aist, building a House to flee Earth and walk between worlds. (Fossils of giant birds are magic, but the inspiration for them is real. Here’s just one example from Australia, the Demon Duck of Doom https://australianmuseum.net.au/learn/australia-over-time/extinct-animals/dromornis-planei-bullockornis-planei/ ). 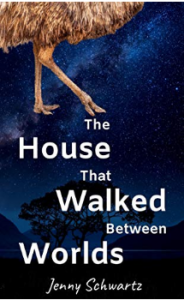 Can I share the blurb for The House That Walked Between Worlds  with you? I love this story so much.

A reckless act of compassion costs Dr. Kira Aist her family and her future on Earth. To escape the wolves pursuing her she’ll have to call on her heritage as a descendant of Baba Yaga and walk between worlds. But to do that she needs a House.

Built of grief and magic, the first new House in three hundred years grows tall and bleak and forbidding.

But not forbidding enough.

As Kira roams the paths of Reality strangers are drawn to her House. Some seek refuge and some seek power. With a cyborg elf, an elegant Neanderthal, a Whisper and a dinosaurian all keeping secrets, Kira discovers that the most dangerous profession in Reality is Landlady.

VS for ASM.: Sounds good! What’s on your To Be Read List?

JS: Age of Deception by TA White Book 2 of the Firebird Chronicles. I absolutely loved Book 1, Rules of Redemption. It’s a classic science fiction romance with strong characters, loads of action, and intense sexual chemistry between Kira and Roake.

Badger to the Bone by Shelly Laurenston.  How can anyone resist her crazy shifters?

And I keep compulsively checking for Book 6 in HDA Roberts’ The Magician’s Brother, British urban fantasy series. I want to read it now!

For more on Jenny Schwartz and her books visit http://authorjennyschwartz.com/

Explosions in movies are supposed to be “cool”. There is an undeniable element of visual interest. It has become an aesthetic and intellectual game to play around with the genre conventions that have evolved around it.

Researchers Found a Treasure Trove of Planets Hiding in Dust