Monday may be an historic day for Amazing Stories

Apple, Inc. has announced and sent out invites for a March 25th unveiling at the Steve Jobs Theater in Cupertino, CA.

The invites say “It’s Showtime!” and feature a countdown symbol associated with film.

There’s been oodles of speculation for well over a year now regarding Apple’s rollout of a streaming service similar to Netflix, Hulu, CBS All Access & similar;  a while ago, Apple announced that it was committing “a billion dollars” to original content.

Among the buys?  A re-do of the Steven Spielberg television show Amazing Stories, which ran for two seasons in the mid-80s and received much critical success, though reviews of the series was mixed. According to this NY Times article at the time, the show’s first season did not fare well, ending the season in 35th place overall, but doing well in key demographics.  (The article is instructive in illustrating how network’s adapt a show between seasons in light of ratings.)  IMDB.com has historical information about the series as well. 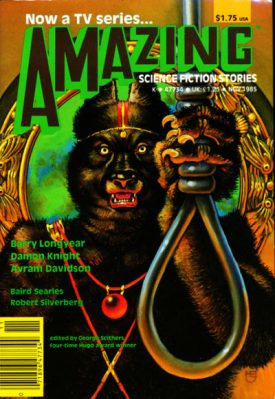 Back in the 80’s, the name for the show was licensed from TSR (Dungeons & Dragons) (later owned by Wizards of the Coast and then Hasbro;  Hasbro’s non-renewal of the trademark allowed us to pick it up), who did little beyond a mention on two issues’ covers to promote the show.

In 2015 we were asked to license the name again for this reboot.

CNET has an article speculating on the rollout on the 25th and states that they will be providing coverage of the Cupertino event.  To find out how to watch, visit this page.  That way, you’ll know just as soon as we do what’s happening.

Of course the meeting could focus on the Apple News App, new hardware and the enhancement and changes to existing services, but, despite being rejected by Netflix, and despite other impending streaming services (Disney for one), almost all bets seem to be on an announcement of Apple’s Streaming service – which may be offered for free (if for a limited time) to Apple IOS devices.

Like everyone else, we’re waiting to see what Spielberg and the Apple production team will be offering us with their latest version of an Amazing Stories anthology show.  Stories regarding taping, calls for extras and filming locations have appeared regularly since the middle of last year in the Georgia/Atlanta area press: This Wikipedia entry links to some of that coverage.

Of course, we’re all about quality Science Fiction, regardless of medium and we hope that this show delivers because a long run for this show will positively impact the magazine.  It’s for this reason that we urge all of our readers to take the show in when it is offered.

Below, a round-up of speculation and bits and pieces of news related to the Amazing Stories television show:

BGR.com:  Instead of rolling out a traditional streaming service, rumor has it that Apple will offer users a subscription bundle where they can sign up for multiple premium channels

Recode.com: Apple plans on making a new storefront that’s much more prominent for those who use Apple TV boxes and other Apple hardware.

Iphonelife.com:  How to watch the 3/25 event on Apple devices

macrumors.com: There’s no word on what this service will cost, but Apple will introduce it at the March event before launching it later in the year, perhaps in summer or fall.

macrumors.com: Variety‘s sources caution that specific plans for the event and how the video service will be introduced may be “in flux until the minutes Cook steps on the stage.”

theverge.com: This is not the first time that Apple has used this tagline for an event: the company first used it for a September 2006 event where it announced that it would start offering movies on iTunes

arstechnica.com: But this will be Apple’s first public event after it reported a marked decline in worldwide iPhone sales, worrying pundits, analysts, and investors that the iPhone-hardware-dependent company is in for difficult times. It is fitting (and perhaps telling) that the event will focus on services—the division Apple is happiest to boast about right now—rather than hardware.

“Without Ray Harryhausen, there would likely have been no STAR WARS” George Lucas. “What we do now digitally with computers, Ray did digitally long before but without computers. Only with his digits.” Terry Gilliam. It is no exaggeration to say that fantasy film fans are still reeling this week from the death of Ray Harryhausen. […]

Reviews, fiction, spanish language posts and Amazing History among our most popular posts this week.