In this week’s viewing: Granbelm nearly explains what’s at stake, The Ones Within brings in some new allies, and more! 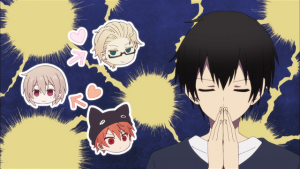 The Ones Within #9 – After a display of intransigence by the whole remaining group, but particularly by Akatsuki and Yuzu, Paca allows them a chance to rescue Kaikoku. Unbeknownst to them all, Kaikoku has already found a way out— not just from the White Room, but from the game itself.

According to the rebel underground, they’re really in a remote physical location in the real world. That leads to a whole lot more questions, like how were they transported there, and how were many of the game-like effects they’ve been seeing achieved? But it does help explain the presence of extraneous items like Yuzu’s collection of stalker photos.

Akatsuki and Yuzu appear to be leaning on their privileged status again. Paca doesn’t seem quite as willing to be accomodating to Yuzu, so he’s able to choose a game specifically to annoy her. Only that seems to have backfired, because the effect has been to make Yuzu drop her act and become completely serious. And a serious, highly competent Yuzu is considerably more frightening than her previous persona. 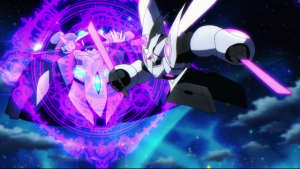 Granbelm #9 – Shingetsu and Mangetsu train for a new level of battle by summoning spirits. This falls by the wayside, however, when Nene confronts Shingetsu with what she’s learned. This terrible revelation can only mean… um… well, if that flashback ever allows Nene to finish the sentence, it’s clearly supposed to be something terrible.

Riding to the rescue is the preview for next time, suggesting that Mangetsu learns she’s being controlled by another power, heavily implied to be Suishō. Meanwhile, we’ve gotten a good look at Suishō’s shield, and those whirling gears on it seem to echo the mysteirous gears which are connected with Magiaconatus.

So, it comes down to this: Suishō controls the whole game. Mangetsu needs to break free. Or Shingetsu, as the only other player remaining after Kuon got her moment of awesomeness and then was kicked out, needs to free Mangetsu. 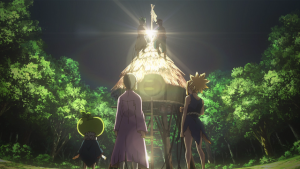 Dr. Stone #9 – Senkū’s plan to demand labor from the villagers in return for the ramen is only slightly sidetracked by an envoy from Tsukasa showing up and trying to look scary. But soon, Gen the mentalist has been nearly won over to the side of science, especially after Senkū manages to jump all the way to electric lighting.

The big moment at the end is a little dimished by the fact that the night has not been depicted as all that dark up until now. Still, it is a big moment, and the show has done a great job showing how much work this has all taken even knowing the quickest path to it.

Likewise, Gen doesn’t have the menace that it seems like he should, being able to bring down the wrath of Tsukasa on the village. Instead, he’s practically on their side from the start. It seems like he’ll be able to contribute the people skills Senkū is lacking.

In this week’s viewing: The Lost Village reveals its monster, Re: ZERO drops more hints toits mystery, and more!