In this week’s viewing: Re:ZERO takes a mental health day, Appare-Ranman! gives everyone time off for hijinks, and more! 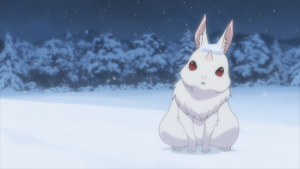 Re:ZERO -Starting Life in Another World- #33 – Subaru tries to get back on track and race to Roswaal’s mansion, but things go even more wrong than before, and he winds up in a mysterious sudden winter being torn apart by wild animals. Anyone would need a chance to regain a few sanity points after that, so Echidna re-invites him to her tea party and provides an unexpected catharsis.

Part of Subaru’s curse is that when he tries to tell people what’s been happening to him, he feels some mysterious power clutching his heart and threatening to stop it. Echidna is the first person he’s been able to talk about it with. Echidna also probably has some answers about it, if he can pull himself together enough to ask the questions.

The sudden deep freeze is something we’ve seen before, but only when Subaru was way off course from the path that finally worked. I don’t recall there being an explanation for what happened, as it didn’t come up when he finally worked out how to deal with his main problem at the time. For the time being, we can take this as an indication that he’s pushing in the wrong direction. 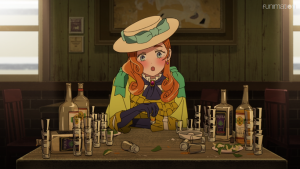 Appare-Ranman! #9 – After making it to Denver, the racers are informed that the route is being changed and they will all need to cool their heels for a bit while the supply depots are shifted from Kansas to Nebraska. This inevitably leads to an outbreak of ridiculous behavior, culminating in Kosame and Appare’s discovery that taking the waters doesn’t work quite the same way in the US as it does back home.

Ah, the hot springs episode, one of anime’s enduring mainstays. I guess I should have known that Appare-Ranman! would find a way to work one in. As hot springs episodes go, this was a fairly good one, in that nothing too cringey happened and we did actually learn a few interesting things about some of the characters.

The hot springs episode also tends to serve as a light moment right before things get heavy, as it looks like they will with Gil up to something nefarious on the railway. 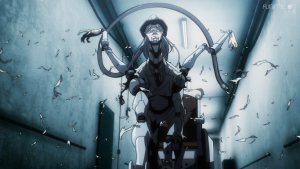 No Guns Life #20 – Wouldn’t you know it, Tetsurō actually didn’t decide to stab his current best friend in the back. With the gambit revealed but everyone else distracted, he tries to impose his own terms on Spitzbergen, which goes badly but does net him a flashback filling in some more of what’s going on with Berühren.

Oh, those researcher names. I’m sure they sound cool to the domestic audience, but for everyone else, this is what it sounds like when you use actual foreign words for character names.

Tetsurō says to Inui that Inui’s experiences in the war have left him unable to fight for his own reasons, only for other people’s. And that certainly rings true: not in the sense of being inspired to fight, but serving as a distraction so that first Mary and now Tetsurō can deal with their own baggage. It does seem, though, like all roads lead to him fighting Seven. 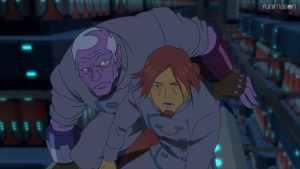 Deca-Dence #8 – Kaburagi’s brilliant plan is that the Gadoll factory can be destroyed by getting back into the game and using the avatars to reach it. What they really need are a couple of bodies with no chips, and Kaburagi just knows where to find a couple of them, thanks to Natsume’s erroneous paperwork and Minato’s convenient habit of keeping the corpses of his friends as mementos.

Speaking of highly convenient developments that come out of nowhere, where did that, um, toy come from? It doesn’t matter, this is a heist story now, and heist stories run on  this kind of coincidence.

This episode also sees Kaburagi’s declaration of who the real enemy behind all of society’s problems is: old people who refuse to follow nature’s dictates and just die already. To hammer the point home, Huginn’s avatar is the only one given gray hair. (In fact, there don’t appear to be any Tankers over the age of about thirty. Does this explain why there are proportionally so many orphans, or did nobody think this one through?)

Anime tends to be pretty ageist, with the occasional exception like Dr. Stone, but it’s usually the passive ageism of choosing only to tell the stories of younger people. Flat-out declaring that old people are bad is pretty unusual— the most recent example I can think of is 2017’s Idol Incidents.