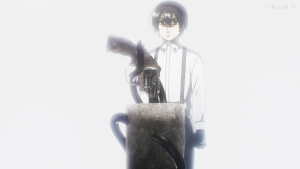 No Guns Life #23 – Tetsurō has chosen to hack into Inui’s cybernetic controller, but only to give him a good talking-to. Inui, in turn, is trying to talk Seven into thinking for himself. But Seven is only listening to the person who tells him to kill everyone.

Tetsurō has learned enough from Inui and about him to turn around and point out that he still hasn’t quite freed himself. Even though Inui no longer takes direct orders and accepts responsibility for his actions as a soldier, he still allows himself to be controlled by events. He’s still looking for other people to bring him excuses for violence, rather than stepping up and deciding for himself what he wants to happen.

And with that mental slap, Inui is fully ready to take on Seven, except Seven is leaving in a hurry now. Inui will get some time to contemplate his new enlightenment while Tetsurō gets patched up and Berühren sorts out its internal squabbles. And then, it seems that there’s got to be one more confrontation with Berühren, to pull out the whole truth about Harmony, and its ongoing experiments, and figure out where exactly Victor’s brain has gotten to. 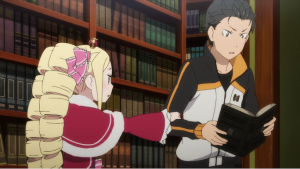 Re:ZERO -Starting Life in Another World- #36 – Things were going so well, but then Subaru manages to get mutilated by Elsa and eaten by evil bunnies in the same iteration of his current time loop. This time through, though, he gains some valuable insights into the nature of Beatrice’s book and Roswaal’s interest in him.

So the book isn’t controlling what Beatrice does, exactly, but describing actions that lead to a desired future. And Roswaal has another copy, and somehow it has informed him as to what Subaru is going through. And he and Beatrice have apparently been waiting for their designated ally for four hundred years, except that Roswaal has actively been working toward the goal and Beatrice has been imprisoned all that time.

After all that work, you’d think Roswaal could just tell Subaru what he needs to do to set the next section of the best possible future in stone, but I guess that speech a few episodes ago about letting Subaru develop himself by fighting his own battles was genuine. So back he goes, to try one more time to find the right path through his current labyrinth of complications. 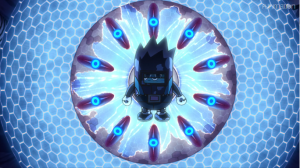 Deca-Dence #11 – With a huge unexpected Gadoll on the rampage and the mobile fortress all but destroyed, Muninn takes control, shuts down the game, and logs everyone out. But that’s okay, Jill knows of an old abandoned feature that she can backdoor Kaburagi into, which just might save the day. With a little help from Minato, a little help from the fighting Tankers, and a whole lot of luck, civilization on Earth might be back in business. If “business” is the word to use, given the whole anti-capitalist slant of this story.

Actually, there might be one more ally showing up to help. The explanation of what happened with the Gadoll factory’s pet is that it somehow sensed the imminent peril and chose to evolve new abilities to evade it. Which is completely ludicrous from a scientific standpoint, but introduces a loophole that fits one other variant Gadoll. Remember that we never actually saw Pipe disintegrate; all we know is that he somehow managed to get out of his hoodie.

Away from the fortress, Jill is turning out to be a more and more significant player in the endgame. She seems to have been someone of great importance when Deca-Dence was created. In fact, underneath the wild hair and glasses (glass?), her design is remarkably similar to Muninn’s. Could she have been Muninn’s predecessor, brought down by corporate infighting? Or someone of a similar type? 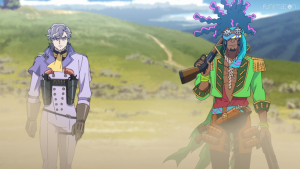 Appare-Ranman! #12 – With everyone and everything up and running again, our heroes commence attacking Gil and his gang. Who, just to remind you that they’re evil, are now indulging in animal abuse and making their prisoners shoot each other.

It seems like the creative force behind this series is a big fan of the Dark Knight version of the Joker. Cool, fine, everyone’s entitled to their opinion, but boy that would have been useful information to have as a warning in advance.

Anyway, everyone gets their big fighting moments just as one would expect, and then it’s off to the absurdly grand abandoned church (anime sure loves stained-glass windows) for the final confrontation with Gil, which is bound not to be solved until Appare’s next clever idea. It’s not just depressing to see the dark turn this series has taken, but to see it being executed with such tedious predictability.

Review of an illustrated novel with three authors

The Art of Designing Covers