In this week’s viewing: Dr. Stone and The Ones Within turn enemies into allies, and more!

Editor’s Note:  This post missed its original scheduling and is being published today. 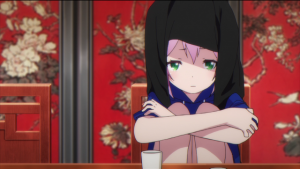 Granbelm #10 – Kuon has not had her last moment of glory. She and her sister are still fighting Suishō, and their trap is now being sprung. Now they get their last hurrah… and then fail, doomed by not being the main characters. After which Suishō becomes very talkative and finally dishes on what’s up with Mangetsu.

As hinted, she’s the creation of a power beyond any individual mage’s control. The surprise is the reason why she was created: the Magiaconatus really likes Shingetsu, so it magicked up an imaginary friend for her. That moment when we first meet Mangetsu maybe the moment when she came into being. Now that her origin has been revealed, she’s become yet another awkward mistake for the Magiaconatus to cover up by erasing her from existence.

At this point, you have to wonder if the history where mages were once common is true at all, or if there’s ever been anything but a big wad of semi-intelligent magic blundering along, trying to find someone it can work with.

Now the problem the Magiaconatus has is that it has two people it really likes, Shingetsu and Suishō (possibly the “two princeps” of the subtitle, who should be in the plural form, “princepes”, but anyway), and they have mutually incompatible desires. Suishō wants to keep watching people be broken by the tournament forever; Shingetsu wants it to end. At some point it’s going to have to pick one or the other. The question is how to get it to make up its mind. 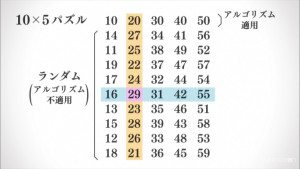 The Ones Within #10 – When Sakura said that the sewer monsters were sort of mermaids, she means they are huge and fishy. And when she said they were sort of like ghosts, she meant a very specific type of dangerous ghost with long hair. But despite the close call, Kaikoku is restored to the White Room just in time to pretend that nothing happened. Meanwhile, Yuzu rocks advanced math and wears herself out trying to rescue him, only to reveal that she’s technically working against most of the other gamers.

Yuzu basically confirms that she and Akatsuki are on the same side as Paca. With her serving as the observer, and Paca coordinating but not in charge of the game, that suggests that Akatsuki is the lead experimenter. All that’s missing is… just about everything about why he’s doing this.

If the Law of Character Economy holds, Nanami’s old partner would be Paca himself. That raises questions about whether Nanami really wants to escape, or if they’re there to discourage other dropouts from reaching the outside world. (Despite Nanami’s masculine appearance, they’re using the feminine first-person pronoun atashi, have a feminine name, and have stereotypically girly writing, so they will be “they” in this space until a clearer signal about their gender identity comes through.) It also means that everything Kaikoku was told about the game site really being on a physical island may be a lie.

So we’re right back to the main question: what is the real point of this game? What happens when they reach 100,000,000 viewers? What’s with the chromosomes? 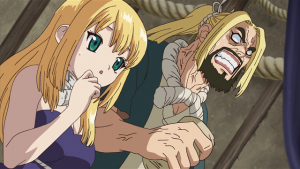 Dr. Stone #10 – Gen proves his loyalty to the Kingdom of Science by returning to Tsukasa and declaring that Senkū is no longer a threat, but not before someone attempts to murder him in a messy, message-sending way, revealing a new opponent that Senkū will have to defeat.

So the Kingdom of Science gets the toughest guys it has available training, but Senkū and Chrome are undoubtedly working on a better solution to the problem. A lot depends on the exact rules of the tournament. Do they get to bring in missile weapons? Better armor? Or is it just going to be a more scientific approach to training?