In this week’s viewing: Re:ZERO and No Guns Life enjoy some villainous idiocy, and more! 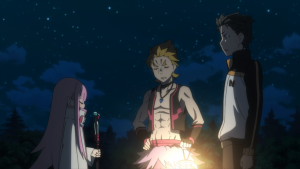 Re:ZERO -Starting Life in Another World- #32 – Thrown back in time after yet another meeting with Elsa, Subaru tries to move even faster and meets with even harder resistance in the form of a kidnapping. And what is left to save the day, but Otto’s resourcefulness? Well, that and Garfiel’s naive trust in his own witness intimidation abilities.

The earlier Subaru floats the idea of him taking Emilia’s place to complete the trial, the more opposed the beastfolk are to it. Is it something Roswaal says that convinces them to accept the idea, or seeing how much Emilia is suffering, or just frustration at the lack of progress? Whichever it is, it still seems like the best path would be to try to help Emilia overcome whatever nightmare is stopping her.

Subaru gleans one more clue about what’s going on when he learns that everything Beatrice has done so far has been at someone else’s command. Like Frederica, she seems to sympathize with Subaru but won’t (or, in this case, probably can’t) go against her orders. Who, and to what end, Subaru probably can’t figure out until he finds the best way to address what’s happening in Sanctuary. 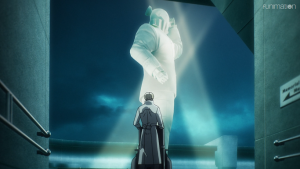 No Guns Life #19 – Inui gets a chance to talk about the war a bit with his fellow veteran, then comes home to discuss matters with Tetsurō. They then arrive at an arranged meeting with Spitzbergen with Tetsurō having taken over Inui’s body as requested, except does anyone other than Wachowski truly believe Tetsurō is going through with the deal?

Okay, maybe Wachowski was a little bit wary, since he did install that lock on Harmony. Still, sure as Chekhov’s gun will be fired in act 3, Inui is still in firm control of his own body. Tetsurō may be controlling another Extended, or maybe, for extra fun, he’s infiltrated Wachowski’s own systems. But I expect we will get a flashback to his talk with Inui next week or the week after, and we will see that they’ve agreed that neither can change the past, but they can try to do their best going forward.

Spitzbergen seems ready to fall apart. Victor is just doing his own thing separate from the rest of the organization at this point. Wachowski looked like he was in charge for a while, but his conversation with Kunugi suggests that he’s only being retained as a useful assistant. Maybe Tetsurō was the actual leader back when he was funding it and Spitzbergen has been slowly disintegrating ever since. Maybe Behrühren secretly seized control when Tetsurō’s involvement was discovered and has been manipulating both sides of the conflict ever since. That’s what it allegedly did in the war, so it would just be continuing with what it’s good at. 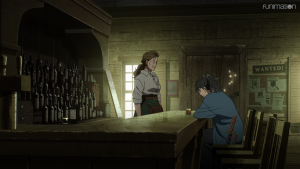 Appare-Ranman! #8 – After discovering that bandits have killed off all the expendable characters, everyone races off to hunt them down and nearly gets to enjoy a mass hanging, until Kosame gets over himself and saves the day.

It used to be that the default length for a TV anime was 24-26 episodes. In the last few years, that has shrunk to 12-13. This is great for everyone who wants to minimize their risk, but not always so great for telling a fully developed story. Appare-Ranman! suffers from it here, having to cram nearly the entire arc of Kosame’s development from coward to a person who has settled the demons of his past and is able to use violence judiciously into one episode.

A longer run might also have provided room to introduce “Riesmann” in a way that didn’t make him so obviously the last remaining person who could be Gil before his big reveal. Heck, it could have given us a chance to get to know the other racers before they got slaughtered, or even set up a couple of red herrings. No need to worry about that now, I guess, since the cast has been thinned to just the named characters, and they still have most of the US still to cross in four or five more episodes. 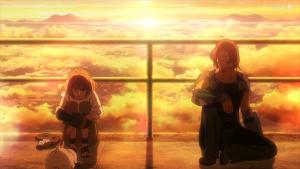 Deca-Dence #7 – Kaburagi returns to the mobile fortress to find a gaping metaphor for societal problems in its side and Natsume desperately trying to rally people to work together to tackle it. Disguised with a new hairstyle and skin color, he manages to deceive Natsume about his identity for all of about half a minute and gets a good talking-to about his old self.

At least he didn’t wind up resurrected in the body of Natsume’s comrade after all. In fact, Mindy, Mandy, and Mundy are all fine, and even her old bullies are coming around to supporting her. A lot certainly has happened while Kaburagi was slaving away in prison, and we probably won’t ever get to see it.

The problem here isn’t time pressure so much as the show just not being that interested in what happens to Natsume when Kaburagi isn’t looking. Much as she seemed to be set up as the main character initially, it’s time to admit that she isn’t and will never be. This is Kaburagi’s story, and Natsume only matters so far as she can motivate him. She won’t get to learn what’s really going on, except after the fact, because she’s there to be vulnerable and need protection.

Space Brothers #57 – Everyone caught that piko-piko is the Japanese onomatopoeic equivalent to “beep”, right? So we all know how the author picked Pico’s name? Well then, let’s talk about a slightly less obvious one: Takio Azuma, one of the astronauts coming up to take the next shift at the moonbase. He’s almost certainly […]

Who is DOC SAVAGE?

Evil is a Matter of Perspective: An Anthology of Antagonists, ed. Adrian Collins and Mike Myers

GoPro from space: watch a stunning NASA spacewalk – The Verge