In this week’s viewing: Deca-Dence bucks the system, Appare-Ranman! goes all in with the movie references, and more! 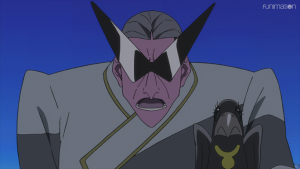 Deca-Dence #5 – With Natsume determined to keep fighting, and the Deca-Dence heading for a near-extinction event, Kaburagi finally makes a decision to punch back at The Man. With a storyline in tatters, a rough draft of a boss monster released prematurely, and a hard reset of the Gadoll supply, Kaburagi’s show of defiance has made life interesting in the short term, but probably makes little difference in the long term.

The ease with which the Gadoll are conjured up and the sky reprogrammed raise the question of whether Natsume is living in the physical world at all. I think the story about Eurasia being evacuated to make a hunting preserve is true, though. Huginn has to pull out his own meat puppet to terminate Kaburagi’s, rather than deleting him electronically. The cyborgs might be living in a virtual world, though.

The Gears have suffered serious losses, even with Kaburagi’s last-minute help, but they’ve been almost entirely confined to the redshirt ranks. In the one sour note of this episode, it looks like the only named character to be killed just happens to be the only non-gender-conforming character in the entire large ensemble.

Now everything is in place for Natsume to take center stage. Will she spend years painstakingly piecing the truth together or will there be a convenient infodump, maybe in a letter from Kaburagi or some fortuitously appearing diary from her dad? I’d love to see a show brave enough to do the former, but we are almost halfway through the season. 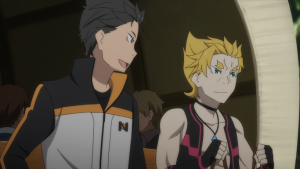 Re:ZERO -Starting Life in Another World- #30 – Subaru passes the first test easily, but Emilia does not, and Subaru has to decide whether to usurp Emilia’s place in her story or stand back and let her keep failing. When he chooses the latter, though, he discovers that he has his own sort of failure to deal with.

Roswaal has a very good point in his talk with Subaru. Just as Subaru wants to let Emilia keep trying until she can save Sanctuary, Roswaal abandoned Subaru and Emilia to fight the cultists because they had to find it within themselves to stand up and win the day. Subaru has a good point as well, in that Roswaal’s decision had a certain amount of collateral damage. Subaru’s actions don’t, but that’s because he can cheat and keep retrying until he gets everything right.

And, after the most consecutive episodes Subaru has managed to stay alive yet, it’s time for him to cheat again. How far back will he reset to? Probably before he last visited the mansion and met Frederica. He can give Beatrice the message from Roswaal, and probe more into Frederica’s motives before he and Emilia head out. 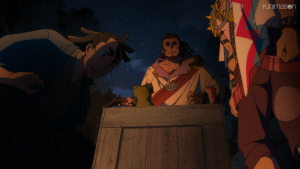 Appare-Ranman! #6 – Everyone makes it to the first supply stop, but Team Appare is behind and getting behinder. And that’s before Hototo disappears and Kosame has to bluff his way through an encounter with a band of bloodthirsty desperadoes with only his wits and a small furry accomplice.

Last week there was an obvious shout-out to The Magnificent Seven, and this week Gil the Butcher has a breathing effect eerily reminiscent of Darth Vader. Is it going to turn out that the guy Hototo thinks killed his father actually is his father? Is Hototo going to be losing a hand? Has this show always been one big mashup of popular movies and it just took me until now to start noticing? 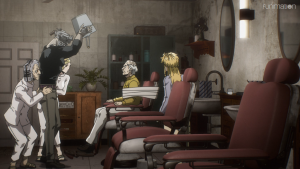 No Guns Life #17 – It’s a pretty good news day for Inui, even if he gets his head cleaning interrupted: Christina and Tetsurō are being set free by Spitzbergen, and Inui gets a new ally who might be providing him with some valuable intelligence somewhere down the line.

Not such a good day for viewers, though, because the new ally is presented as a long-form rendition of one of anime’s worst habits, the allegedly humorous pervert. This is a trope which basically exists to turn female characters into fanservice while providing the excuse that no, no, the author or director doesn’t approve of this sort of thing, they just have to show it to show what a terrible, bad person the character is. Because not having that character was somehow not an option.

I guess we’ll see Podpie again soon when he delivers some valuable clue to Inui, and without a doubt we’ll have to sit through this routine again. Hopefully it at least won’t be padded out to half an episode next time.

AMAZING THINGS: The Clockwork Rocket is On Sale