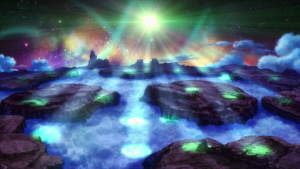 Granbelm #4 – Anna’s revenge on Shingetsu is thwarted once again, as Nene and her sisters fill the new battlefield with an Itano Circus that leaves everyone scrambling for cover. After the fight ends with no winners or losers, an alliance is hastily brokered to take Nene down. Unfortunately, Nene is in just the right place to find out about it.

It’s also not helping Anna that Suishō isn’t following orders. But it’s clear now that Suishō is just putting in the minimum effort to avoid conflict until Anna is out of the way. Suishō doesn’t seem any less strong, just not willing to start a direct confrontation. If ever Shingetsu is on the verge of defeating Anna, Suishō might help take her down.

A question now being raised is how exactly magic is used and inherited. Nene’s short stature is implied to be a tradeoff for her mother’s strength at magic. Kuon has inherited her place in the fight from her sister. But Mangetsu seems not to have any magical relatives.

Shingetsu suggests that Mangetsu’s ability is a spontaneous new appearance of magic, which implies that whatever was keeping magic out of the world is failing. It suggests a possible disaster if magic breaks free entirely, but also the opportunity to change the rules. That could mean taking Shingetsu’s approach and blocking it completely (for as long as that might be feasible), or making a different bargain. 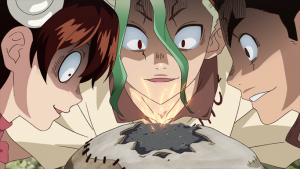 Dr. Stone #4 – Taiju finally gets a peaceful moment to confess his feelings to Yuzuriha, and then it’s gunpowder time. Senkū’s recipe is so successful that it nearly kills everyone directly, and then puts them in further danger by revealing their location to Tsukasa… and to someone else who shouldn’t even exist.

The confrontation between Senkū and Tsukasa lays out why Senkū is the hero, even though Tsukasa, with his incredible athleticism, is superficially more like the typical Shonen Jump hero. The real values of a Shonen Jump story are friendship and self-improvement. These are typically communicated by having the protagonist learn to punch villains ever harder to save his friends, but here it’s Senkū who embodies them more. He’s on a quest to do better and better through science, and he’ll give up every advantage he has to save his friends. Tsukasa has no friends, and only wants to destroy those he considers unfit.

Taiju and Yuzuriha’s romance has some pleasant trope subversion, though, starting with the fact that they’ve even reached an understanding this early. It’s also nice to see that this is not going to be the sort of story where admitting love leads straight to a fridging. 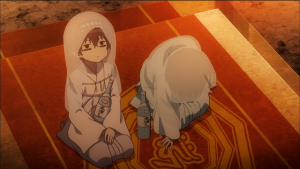 The Ones Within #4 – The next challenge has a historical fantasy feel. The players are sent to a quaint village to keep ogres from kidnapping maidens, which is slightly complicated by the revelation that the villagers are the ogres and the players themselves are the intended victims.

Despite the amount of time spent bickering over tactics and assignments, the players are really starting to gel as a team. They’re getting familiar with each other’s strengths and weaknesses, and they’re all, in their own ways, trying to pull in the same direction.

And their quirks continue to help with the game, rather than being annoying distractions. Yuzu’s obsession has just saved the day for a second time. Akatsuki may be a little too willing to believe that no one is waiting to stab him (okay, technically, she came at him with a slashing weapon) but his earnest niceness has finally convinced Anya to get over himself and try to be a productive member of the team.

Guest Post by Eric Del Carlo In 2005, the year of Hurricane Katrina, we broke the alphabet. Storms which brew up in the Atlantic and grind toward the Gulf of Mexico get named alphabetically. It’s a simple, easy to understand metric. That year, for the first time, the frightening tropical disturbances overtook those twenty-six letters. I’m […]