In this week’s viewing: There’s nothing much to watch this week, actually, so enjoy a belated review of a show that was overlooked in the distant past of January 2020.

The summer season premieres aren’t going to be starting in earnest until the day this column is published, so it’s time for a filler episode. As it happens, I’ve been looking for a gap like this to make amends to a show I accidentally wronged earlier this year.

Keep Your Hands Off Eizouken! is the story of three high schoolers who form a club to make anime. When it aired this January through March, there was a ton of positive buzz for it throughout anime fandom. But what got left out of the buzz— and from the usual reliable pre-season sources— was that it is also science fiction. And so, a belated review… 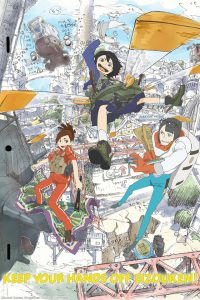 Asakusa Midori is a nerdy, socially anxious girl with a sketchbook full of ideas and no one to show them to. Mizusaki Tsubame is a teen model whose actor parents are pushing her to follow in their footsteps, but she really wants to become an animator. When the two of them meet and discover their shared interest and their complementary talents, a beautiful artistic partnership is born.

But there is one more ingredient which the show quickly emphasizes is essential to making things work. Kanamori Sayaka is Asakusa’s friend who has no interest in anime per se, but smells a moneymaking opportunity when Mizusaki enteres the picture. When the artists decide they want to start a new school club to make anime, Kanamori is the one who puts their case to the school management and makes it happen. 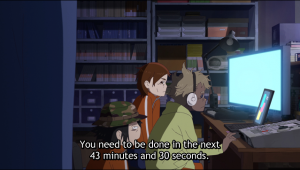 The club then becomes a miniature anime studio with Asakusa as the writer-director coming up with concepts and stories, Mizusaki as the lead animator devoted to technical perfection, and Kanamori as the producer, reining the other two in with reminders that their time and budget are limited, and artistic vision must necessarily bow to the need to get the thing actually done. Asakusa’s flights of fantasy are a joy to behold, but it is just as much fun to see Kanamori at work, deploying every resource she has including scheming, blackmail, and outright intimidation to get the club what it needs. 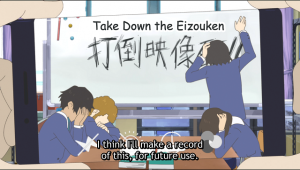 And the science fiction aspect? This all takes place sometime late this century, in a world shaped by climate change, rising sea levels, and at least one other catastrophic global event. Nothing is ever explicitly explained, as the characters just go about their business in the world that they’ve known all their lives. The tale is told in the little details they don’t pay attention to: the fact that only the older part of town has proper streets, the partly submerged buildings along the shore and canals, the huge amount of infrastructure devoted to managing water. 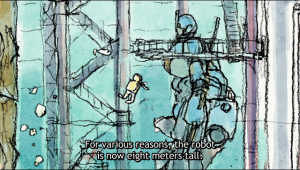 Keep Your Hands Off Eizouken! is also about science fiction. All three of the projects the club completes in the course of the show are sf, and Asakusa is the sort of person who wants to make her sf make some kind of sense. But this is one of the many areas where the show examines the tradeoff between aspirations and reality. In one case the story has to be thrown out completely due to the production deadline, and in another the group sponsoring the project requires it to include something even they admit is completely implausible. 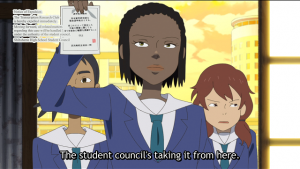 There is one other speculative piece to the setting, and it leads to my one complaint about this show. Japan of a few decades hence appears to have loosened up its immigration laws, leading to a surprisingly large minority presence at the high school. But because this is a story about the members of the Film Research Club going up against the world to make their art, every character who is obviously not ethnic Japanese is initially presented as an obstacle. Further, what may have been a noble impulse to show a Black character in a position of power means that the darkest-skinned named character in the story evolves into the main antagonist as the student council attempts to rein the club in. 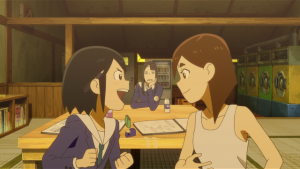 The unfortunate results of bolting on diversity as an afterthought aside, this show about the messy, frustrating process of bringing creative work to fruition is the best thing TV anime has given us in this messy, frustrating year. And now, with relatively few new shows coming at us this season, it’s the perfect time to catch up on it. Keep Your Hands Off Eizouken! is available worldwide on Crunchyroll.

It’s safe to say that I saw Pacific Rim with a degree of trepidation. I may be a SF lover, but Transformers really isn’t my thing. Nor is Godzilla. So, when you throw these two together I was expecting to be either horrified or bored. I’m glad to say that I was far from falling […]

OK, let’s talk about fan films. They’ve been around forever. There were folks making movies based around characters from books as early as the 1910s, and the explosion in comic books led to a huge number of fan films based on them. TV and movies inspired even more over the years. Some of these have […]