I’m sure all of you have seen the awful news about the arson attack on Kyoto Animation. 34 people are now confirmed dead. All their work in progress has been destroyed. The remains of the building may be replaced with a public monument.

What makes it especially tragic is that KyoAni has been a leader in the anime industry in treating its workers well. Most notably, it paid them actual salaries instead of the piecework rates which have hardly changed since Osamu Tezuka standardized anime production in the 1960s and 1970s.

Japan has a first-world social safety net, so no one will be stuck with excessive medical bills as a result of the arson. But people still want to help, and a number of GoFundMe campaigns have sprung up with a nebulous goal of handing the money to KyoAni or the survivors. Until it is clear who exactly it’s going to and for what, it would be best to steer clear. Even the massive campaign organized by Sentai Filmworks may inadvertently land KyoAni with a huge tax bill.

But if you really want to get a donation to KyoAni without worrying about scammers or tax shenanigans, there is one option: buy their stuff. Here’s their handy list of the shows and movies they’ve produced, most of which you should be able to find at your favorite anime media store. Or, if you prefer, here’s a quick guide on how to buy things from KyoAni’s online store directly. 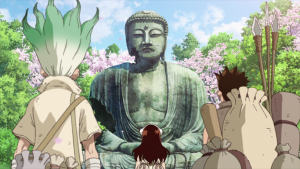 Dr Stone #3 – Yuzuriha is finally revived, though not without additional complications as Senkū tries frantically to keep some advantage over Tsukasa. Unfortunatley, Tsukasa isn’t just an overpowered brute, and Senkū finally decides that the best course of action is to flee to a more advantageous location. That turns out to be Hakone, famous in our time for its hot springs, which means a ready source for one of the key ingredient for pushing their weapons technology forward.

Yuzuriha is pushed out of the spotlight almost immediately by more urgent concerns, but it’s nice to see she isn’t going to be treated like a delicate flower. Indeed, she survives the walk to Hakone in much better shape than Senkū. On the other hand, it’s taken as read that she’s going to be doing the cooking from now on. I would hope that not every one of the female characters is going to be relegated to skills which 21st-century Japan considers girly.

Sulfur is of course only one of three ingredients in the classic black power recipe. Charcoal is an easy one, since they’re surrounded by trees. Saltpeter, though… well… let’s just say Taiju probably hasn’t seen the last of bat-infested caves yet. 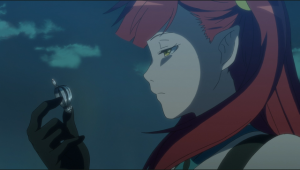 BEM #2 – When Bem, Bela, and Belo chose to live among humans, they copied real ones. The inherent potential for awkwardness is realized when Bela is discovered by an old friend of the murdered girl whose face she’s wearing, and the murderer decides this situation cannot be allowed to stand.

Once again, the only bad thing about this show is the choice to use monster-of-the-week designs that look like they were pasted in from the original 1960s series. The graveyard monster looks even more out of place than the one last week. Bela’s own monster form, on the other hand, looks like it has made the transition very well.

Aside from the one art decision, this was a decent murder mystery and a good introduction for Bela. Next week should be a similar one for Belo, but I’m afraid this is where coverage of BEM stops.

It is still the policy of this column to not taunt readers with shows they don’t have access to. Allowing that most of you reading this are probably living in countries that primarily speak English, this means that at minimum I want to cover shows available to the US, UK, Canada, Ireland, Australia, and New Zealand. Unfortunately, BEM is not available to the last two. 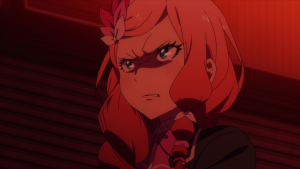 Granbelm #3 – With the next monthly battle coming up, Granbelm does a quick survey of the motivations bringing some of the girls into it. One new combatant is trying to carry on her sister’s legacy. Another has teamed up with her sisters to try to win with an analytical approach. And then there’s Anna, burning with the humiliation of her family adopting multiple replacements for her.

The Fugo family clearly values winning above all else. Claire gets approval for being a champion gymnast. With Anna struggling, they’ve brought in Suishō and Rosa to hedge their bets (until Rosa lost), and want to collect Shingetsu, who looks like the likeliest winner. They’ll probably be making a move on Mangetsu before long.

Shingetsu is trying to opt out of the game, though. She wants to put magic beyond anyone’s use permanently. This puts her in direct conflict with Mangetsu’s goal of winning just because she can. Considering that, Mangetsu takes the news fairly well. For now… 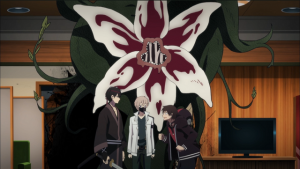 The Ones Within #3 – Zakuro and Kaikoku are about to relate how they stormed Area 51 when suddenly things turn into a combination of Invasion of the Body Snatchers and Day of the Triffids. Luckily, a couple of people are actually prepared to fight giant human-imitating plant monsters.

The spotlight in this episode is firmly on Yuzu. She may have an unhealthy obsession, but she’s smart, willing to work with the team when necessary, and probably the most media-savvy of the bunch. She knows she’s the heel, and she doesn’t seem to mind playing the role. Even her obsession with Akatsuki winds up working for the common good. And hey, at least now she’s a dangerous obsessive who doesn’t have a bag full of poison stashed away.

It’s good to see the team starting to consider the bigger questions about what’s really going on. The reason for the town being empty seems straightforward; it was created for them (and earlier teams). Then again, if they’re in a computer world, why not populate it with NPCs? 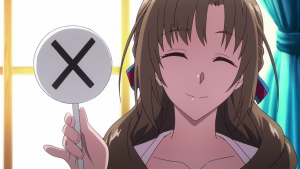 Do You Love Your Mom and Her Two-Hit Multi-Target Attacks? #2 – Interviewing potential party members strictly on personality, Mamako turns down a fighter and picks up a mage and a completely non-fighting merchant. (Well, it’s not like they really need more melee power.) And then things go downhill very badly.

Everything about the first episode said this wasn’t going to be one of those shows. You know, the ones pandering to a very specific otaku segment with detailed upskirt shots and nudity which can only be fully uncensored by buying the premium BluRays. And yet here we suddenly are, with the promise of lots more next week.

As promising as the premiere was, it looks like it used up all the good jokes it had available. So here we leave it.

Thirty-four years ago, Steven Spielberg created the just-about perfect family movie in E.T. The Extra-Terrestrial. So his reunion with that film’s screenwriter, Melissa Mathison, should have been something to cherish. But for the first hour of The BFG, I watched in bafflement, amazed  that this writer-director partnership could have created something so lifeless. And […]