In this week’s viewing: Second looks, catch-ups, and premieres, including the best one this season. 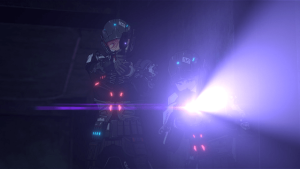 Night Head 2041 premiere – In future Japan, all mentions of supernatural powers in fact or fiction are banned, and commandos hunt down anyone claiming to have those powers. Two such commandos’ lives are complicated by a series of unexplainable phenomena, while two psychic brothers are suddenly released from a research facility with little information about what’s been happening in the world while they were locked up in there, and rapidly work out that they will be hunted down if they aren’t careful.

Night Head 2041 is something extraordinarily rare in the anime world: genuine Hollywood-style skiffy which treats sf as an aesthetic rather than a genre of storytelling. It is uninterested in showing the impact banning fantastical fiction has on people’s lives, or why Tokyo seems curiously unscathed by World War III, which has reportedly happened sometime in the last 20 years. No, it’s just about showing a world that functions identically to our own, just with blinkier lights, cooler body armor, and fancier motor vehicles. The rule about supernatural powers is delivered by a convenient public announcement system while our commandos roll through the city in their futuristic Humvee-equivalent on their way to shooting people and breaking things to arrest a self-proclaimed miracle worker.

The show also has some other Hollywood problems, like every adult woman having to wear something that shows off her cleavage, and the curious decision to set the two brothers free without getting them up to speed on, for instance, World War III. It’s a shame, because this is easily the best-looking show this season, clearly having gotten an excellent production budget.

This is a remake of the show Night Head, which ran from 1992 to 1993. To be resurrected nearly 30 years later, it must have an enthusiastic fan base, and so I guess it doesn’t need to try very hard. 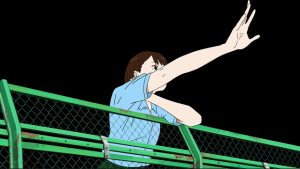 Sonny Boy premiere – A class of high school seniors was going about their normal business one day when the world outside simply vanished. Now the school is an island in a pitch-black nothingness. Some of them want to try to maintain order, some want to smash the system, and some just want to opt out. The problem for the last group is that some of the others have developed superpowers.

This premiere has a lot of work to do and wastes no time doing it. We’re introduced to the characters who will be some of the major players in the story, while they puzzle out some of the rules their new environment operates by. More questions are raised than can possibly be answered, but everyone does begin to get a handle on their situation… until the final seconds of the episode, when they have a whole new problem to grapple with.

In a season where hardly any other show feels like it’s trying, Sonny Boy has shown up with its A game and a whole wagonload of ideas. This is far and away the best premiere of the season, and I can’t wait to see what it has in store for us next.

That’s all the premieres we get this week, but we still have The Idaten Deities Know Only Peace next time, and the return of Magia Record the week after that. In the meantime, let’s take a second look at a few possibilities for following for the rest of the season… 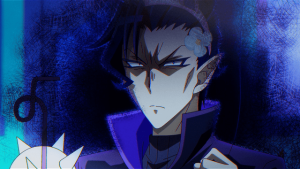 Welcome to Demon School! Iruma-kun season 2 #12-14 – Sullivan’s manservant has a bit of a history with Professor Kalego, and so contrives to make Kalego’s life a little more uncomfortable with a couple of small suggestions to Sullivan. First, Kalego has to make home visits to all of the wacky, offbeat families of his wacky, offbeat students, and then he has to chaperone some of those students on their summer break visit to the demon world’s best amusement park. The impending multi-monster attack by the forces of chaos can only improve his day.

The meandering visit to Walter Park suddenly takes on purpose when it turns out we’ve been meeting the shadowy group which is the next level up from Kirio in the plot to return the demon world to its former state of anarchy. They’re an interesting bunch, especially as most of them seem to be genuinely enjoying their time as park employees.

But that’s a theme that Welcome to Demon School has had running through it from the start, that no one is truly irredeemable. Even Kalego, who loves torturing his students with extra homework, has a competent instructor who’s genuinely trying to improve them somewhere in there. Even Kirio, who Iruma still hasn’t given up on.

It is never going to be a masterpiece, but this is still a big ball of sunshine that brightens up any season. 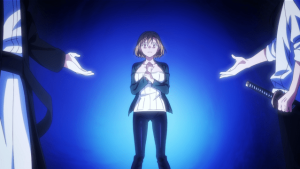 Peach Boy Riverside #2-3 – After slaying the ogre threatening Rimdarl, Sally has very little time to come to terms with her new heroic status before she throws it all away to save a crippled ogre. And very little time after that to adjust to her new status as a fugitive before Rimdarl is no longer a going concern. And soon after that, settled in a new kingdom, she faces the possibility of no longer being an ogre-slayer at all.

It seemed like episode 1 spent an excessive amount of time demonstrating that Sally is Not Like Those Other Humans when it comes to bigotry against demihumans, but it turns out that wasn’t establishing background character traits, it was central to the story Peach Boy Riverside wants to tell. It’s the depth of human prejudice against non-humans that leads Carrot to conclude she might be better off dead once her powers are gone. And it’s Sally’s willingness to see living peacefully with even ogres as an option that leads her to the momentous-looking choice at the end of episode 3.

Sumeragi is obviously up to something. Certain ogres seem like they could live alongside humans peacefully, but he sends Todoroki off to kill Mikoto as earnestly as he later encourages Juselino to go make friends with humans. So the offer of peace is a trap, but at the same time I can’t see Sally choosing to go all in with Mikoto at this point.

This is not the show I expected, but it has already improved immensely since its first episode, and it feels worth sticking around to find out what Sally’s decision is. 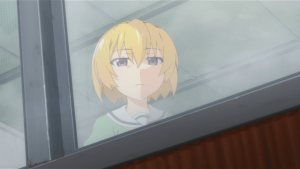 Higurashi: When They Cry – SOTSU #2-4 – As Rena sinks into the grip of Hinamizawa Syndrome, she becomes convinced that she needs to fix all her family’s problems herself, leading her into worse and worse choices. And after that fails to shake Rika’s faith, then it’s Mion’s turn.

First, props to Higurashi for illustrating that dismembering and disposing of an entire hundred-pound-plus adult human body is hard work. Also, the route Rena’s paranoia takes is a pathologized version of standard Japanese cultural expectations for a girl who has no mother in the house. It’s completely normal for the place and time for her to be expected to do all the cooking and the cleaning in her house, and yes, also to make dinner for her able-bodied, sane, intelligent friend when his parents happen to be out of town for the night.

On the other hand, story-wise, there isn’t a whole lot new to us here. After all the big reveals about Satoko in GOU, it was a pretty good bet that she was using the experimental serum to choose who went mad in each arc, that she was the source of the mysterious gun in the one where Mion got paranoid, and so forth. We have a few new tidbits here and there, like learning about Rina, and that Rena’s problems nearly solved themselves without any murder, but most of the big questions already feel answered.

It looks like SOTSU is now going to run through the first arcs of GOU from alternate viewpoints, although faster, and it seems to be promising a conclusion to Rika and Satoko’s struggle at the end of the story. I think we might as well stick with this one to the end; it’s only supposed to run through the end of September, and there’s no a whole lot else competing with it right now. 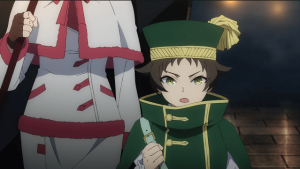 The Case Study of Vanitas #2 – Noé is unable to part ways with Vanitas as planned as the two of them first land in jail, and then a series of increasingly oddly dressed people interrupt what they are doing with demands to turn over or destroy the Book of Vanitas.

Two episodes in, this show feels like it’s already falling into a rut. The Book of Vanitas is rumored to be the source of vampiric corruption, Vanitas and Noé insist that it’s being used to help people, arguing happens until someone decides it’s time to take action. First our heroes have to go track down a corrupted vampire and not cure him until they can all assemble in front of the local vampire authorities, and then they’re facing a legendary vampire executioner.

This isn’t terrible, but it hasn’t managed to find that spark to make it truly good either. I think we’ll leave it here. 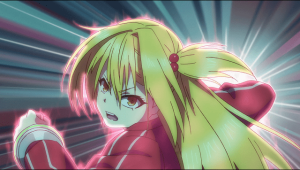 Battle Game in 5 Seconds #2 – Setting Akira aside for a bit, we are introduced to fellow fighter Amagake Yūri, who seems to be a magnet for harassing creeps and is revealed to have the complex power of… enhanced strength and reflexes.

Battle Game in 5 Seconds still has exactly one interesting idea, Akira’s power. For its female lead, it can think of nothing better than to put her in sexual danger, and a lot of it, subjecting her to less than three horrible men in one episode. Plus since Akira’s first opponent is back and looking none the worse for wear, that means Yūri’s opponent can be brought back to menace her over and over again.

One good idea isn’t enough to sustain a story if the rest is so horribly lacking in inspiration. Dropped, with prejudice.

Well then, here’s the start of a seasonal blogging lineup at last: Higurashi, Welcome to Demon School, Peach Boy Riverside, Sonny Boy if it stays anywhere near that good next week, and there’s still a slot open for the return of Magia Record or for The Idaten Deities Know Only Peace.

Woman Can’t Be Comedians? Funny You Should Say That…