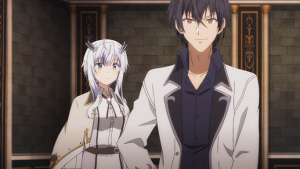 The Misfit of Demon King Academy premiere – As the owls go out to invite a new class of students to magic school, a special excitement hangs in the air, because this is the year the reincarnated Demon King is supposed to appear. One of the new students is named Anos Voldegord. He has glowing red eyes, he’s grown from an infant to an adolescent in a month, and somehow everyone is surprised that he has incredible magical power.

Yes, it’s time to strap in for yet another idiotic light novel adaptation about an overpowered protagonist who is supposed to be badass yet kind but comes off as repulsive and insufferable. Supporting roles include several people you’ve come to know and loathe, like the shy and fragile girl with a tragic past, the bully who is in the story just so the hero can look awesome by beating him up, the disdainful noble who has to be shown that commoners can have powerful magic too, and more.

There are a couple moments that would have worked as part of a wicked comedy if this show had truly embraced its dark side, like when Anos repeatedly kills the bully and resurrects him, then makes a crack about the three-second rule. Unfortunately by then Anos has already indulged in too much speechifying, the show has already tried to hard to demonstrate that he’s A Nice Guy Really, and you will have noticed that the designated punching bag is the only dark-skinned person in the entire city. (Later the same guy gets magically tased to death.) Avoid this show at all costs. 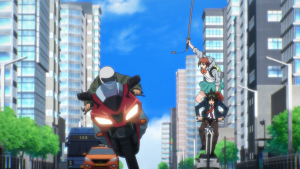 The God of High School premiere – “The God of High School” is an all-out fighting tournament to find the strongest teenager in Korea, though it is rumored to have a very idiosyncratic method of selecting its combatants. On the morning it’s due to start, three contestants start to bond after coming together to catch a purse snatcher in an outrageous chase through the streets of Seoul. But there is much more lurking behind the tournament than any of them can guess.

Action scenes are where this show really shines, starting with chase scene, where the three soon-to-be friends display strength, resilience, and tactics more appropriate to Looney Tunes characters than human beings. (Knowing that this is a fighting show with supernatural elements, this is all forgivable because it is likely to be revealed soon that the central characters have superhuman powers.) The chase and the later fighting scenes are dynamic and entertaining as all get-out.

Unfortunately, it all comes with a boatload of used action-movie plot elements. Before getting to the fun stuff, there is a prologue involving a corrupt politician, some mobsters, and their disposable female eye candy. The first direct antagonist that our heroes face demonstrates that he’s a bad guy by wearing dreds and by harassing the female lead. There is exactly one Black character and he’s a rapper.

If you are willing to turn your brain off in exchange for some over-the-top action, this is your show. 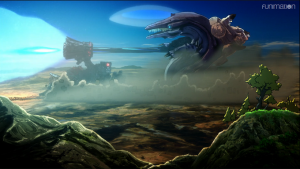 Deca-Dence premiere – In a world overrun by monsters called Gadoll, the last remnants of humanity have abandoned their cities to live inside the giant fortress/weapon Deca-Dence. Natsume, a teenage orphan now old enough to enter society, wants to join the soldiers who fight the Gadoll and wipe the monsters off the face of the earth, but instead she’s assigned to armor repair duty. Her new boss, Kaburagi, encourages her to accept her lot in life, but it turns out he’s hardly just a humble repairman himself.

Although there’s a lot about Deca-Dence and its world sketched out here, enough details are provided to understand that not all is as Natsume believes it to be. It’s made clear to the viewer that the fortress would cease to run if the Gadoll were eradicated, for instance, and it’s implied that most of the soldiers may not be human. Kaburagi doesn’t just turn out to be an ex-soldier, he’s involved in some other secretive activity. And scenes at the beginning and end of the episode suggest a whole extra layer to events that none of the humans may be aware of.

It’s a fantastic and original world, not to mention nice to look at, peopled with some likeable major characters, well worth a second look. 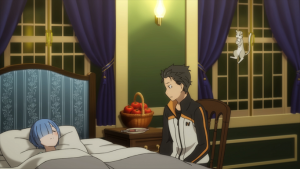 Re:ZERO -Starting Life In Another World- #26 – No recap is provided to ease new viewers into the series, so here’s one: Natsuki Subaru was, like so many other light-novel protagonists, killed in modern Japan and somehow reconstituted with all his memories intact in a vaguely medieval fantasy world. Unlike many other light-novel protagonists, he has spent his time learning a series of hard lessons about his lack of entitlement to anyone’s respect or obedience.

Subaru’s one special power is a thing he calls Return By Death, which pops him back in time every time he dies. And he has died a lot by now, screwing up over and over again until he has learned to build alliances and friendships, the culmination of which was the defeat of a centuries-old monster. Yet, just after that, a new threat appears which nearly wipes a good ally and a dear friend out of existence entirely.

Not that much happens in this episode; the major players for the next story arc are introduced or reintroduced, and Subaru emotes a lot. Still, on the basis of past performance, this show should get at least a shot at the season lineup.

And that’s everything that aired before my deadline this week. The premieres of No Guns Life and Gibiate were both pushed back a week, and Ninja Collection is still TBA. Hopefully you’ll be getting reviews of the first two plus Mr. Love: Queen’s Choice, plus second looks at Deca-Dence and this season of Re:Zero next week, but, well, this is 2020 and one hesitates to make rash promises.

How to catch Comet NEOWISE before it’s gone

Film composer James Horner has died in a plane crash.