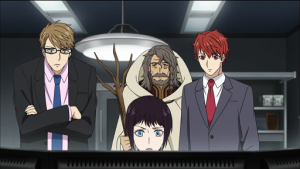 Midnight Occult Civil Servants finale – With an adaptation of an ongoing manga, you never know where it’s going to cut off and leave you hanging. Luckily, the episodic nature of this one lets it tie things off nicely with a brief story about Arata returning to his humdrum office life. For a definition of “humdrum” which includes taking in a homeless amnesiac with a peculiar diet.

Those Ears of Sand aren’t going to do Arata much good if he doesn’t learn to listen with them. Asking “What do you mean, he’s obviously a god and smells like a bear?” or “Wait, what was that about being a god of the hunt?” might have cleared things up much sooner. But then it wouldn’t have been solved by Arata trying out some exotic foreign honey, and the story wouldn’t get to make its point about how diversity is good, embracing the world is good, and Shinjuku is the best because it’s full of foreigners. If humiliating the personification of the Japanese right wing last week didn’t make things clear, this episode certainly puts the exclamation point on what it’s trying to say.

I’m sorry to see this go a week sooner than it had to. This may have gotten the short end of the art budget, but the story has been more than worth sticking around for. In a subgenre so slanted toward bloody confrontation, it’s nice to see an urban fantasy about people being able to sort things out peacefully and get on with their lives. I would love to see more of this, but that’ll depend on the video sales doing well in Japan. 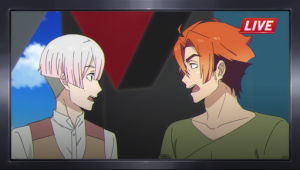 RobiHachi finale – Robby and Hatchi’s luck has certainly changed since reaching the grand shrine, as they’re able to dodge all their pursuers, find the quick route home, and arrive at a most fortuitous time. They get to enjoy fame and fortune for a little while, but maybe it’ll be time for a new road trip soon.

As a finale, this is excellent. There’s a pleasant little denoument for everyone, even the villain, even Robby and Hatchi’s grandfathers as the final piece of their story is put into place. Even the director gets to have one last little dig at the anime industry. There’s even room for a sequel, just like its inspiration the Tōkaidō Hizakurige was followed by the Zoku Hizakurige.

As a whole, this series comes out decidedly mixed. There were a couple of absolutely terrific episodes in the back half of the season. But both the heroes could be intensely annoying at times when the writing made them a little too one-dimensional, and the Predatory Gay stereotype is really past the end of its lifespan. It felt like the best parts were the ones least inspired by the Tōkaidō Hizakurige.

I was hoping for something more focused on skewering sf specifically, and didn’t get it. On the other hand, I didn’t expect a sequel to Cute High, and might be able to recommend it to people who are desperate to see more things in that universe. It’s at least better than the HAPPY KISS! season. 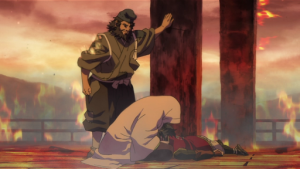 Dororo finale – Hyakkimaru sees as they fight that Tahōmaru is missing something as well, and tries to stop. This somehow convinces Tahōmaru to give Hyakkimaru’s eyes back. Tahōmaru is rewarded by finally getting his mom’s undivided attention, and then he, Nui, and Jukai piously burn to death. Kagemitsu is undone in a very real physical sense, leaving no barriers to the peasant kingdom that Dororo will finance with the hidden treasure.

And then oy, those last few seconds. After leaving room all this time for Dororo’s identity to be confirmed as male, the possibility is destroyed with a one-two sucker punch of Trans Is Just A Phase and Every Story Has To Be A Romance.

This is just one part of a needless desire to pack everything away in tidy boxes. There’s no reason for Tahōmaru, Nui, and Jukai to die, other than they’ve served their purpose in supporting the hero’s personal development.

Overall, I rate this as a historical curiosity. It’s been interesting due to the age of the material and the famous name attached to it, but the writing has been strictly average and the art has noticeably deteriorated from the gorgeous work of the early episodes. This is one for the Tezuka completists only. 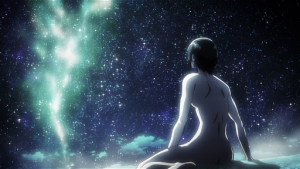 Attack on Titan #58 – Kruger unloads the final secrets of the Titans to Grisha. He admits that he has hidden so well for his entire life that he might as well be complicit in the oppression of the Eldians, and wants Grisha to do better. And then he adds one last reason that doesn’t make sense to either of them.

The Paths are the biggest of the revelations. Somehow linking everyone with Titan-capable genetics, the Founding Titan can use them to transcend space and time. It might not be a copy of the personality of the king who built the Walls taking over the Fritz family as they inherit that Titan, but the king directly working his will into the future. And Kruger’s mention of Armin and Mikasa suggests that he is somehow being manipulated by Eren— in his lucid dream “now”, or some Eren in the future when he has figured out how to more fully use the Founding Titan’s powers.

Piecing together Dina’s fate not only reveals that Eren’s family is way more screwed up than he previously suspected, but also gives him the key to those powers. If he makes physical contact with someone with royal blood who is also a Titan, then he can make full use of them. And there’s someone recently introduced who fits the bill: Zeke.

The 13-year limit helps explain Grisha’s sudden move on the royals. Eren was 12, so Grisha would have almost run out of time. The question left is why 13 years? If Ymir had the power to alter Eldians’ bodies, this must have been a deliberate choice.

Finally, naming the Attack Titan is a big moment. Its name in Japanese, Shingeki no Kyōjin, is not only the name of this episode but the series as a whole. “Attack on Titan” is a terrible mistranslation that was allowed to stand because the manga was already translated under that name, which in turn was because the original manga cover art already incorporated it. This series is, properly, The Attack Titan (or The Advancing Titan, since shingeki means an advance on a battlefield), and it has taken fifty-eight episodes to get around to explaining why. That’s really setting things up in advance. 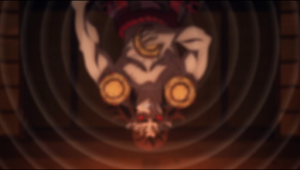 Demon Slayer: Kimetsu no Yaiba #12 – The mansion is haunted by multiple demons, which conveniently gives everyone a chance to show off their individual fighting styles. Zenitsu shows that, under extreme duress, he can enter a state of temporary competence. Mr. Boar Head is so eager for a fight that he’ll take anyone on, even a fellow demon hunter. Tanjirō uses smarts and compassion, but then the author remembers that he’s supposed to be seriously injured. Could it be that everyone will have to work together to save the day?

Along the way, we’re introduced to the concept of menchi, super-special blood (chi = blood, not sure about the first part yet) which lets demons level up far faster than when they eat ordinary humans. What are the odds that Tanjirō turns out to have it, and becomes an even bigger target for demons than he already is? Perhaps it’s also something that makes demon slayers what they are?

THE PROCESS takes 3rd in the short novel by Ediciones El Transbordador; “Jot Down” magazine announces the 9th popularization of science contest