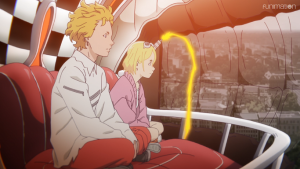 Listeners #7 – Nir makes her way to Londinium, where getting a tune-up for her amp puts her in the company of two aspiring Players who lost their families in an Earless version of the Blitz ten years ago. Just when they get a chance to kick some Earless butt, disaster strikes in the form of… Mu?

To start with the obvious questions, what on Earth has happened to Echo and Mu, as well as Lyde and Ritchie? (Cynical viewers will have noted that we never see any bodies.) How was Mu persuaded to help out what appears to be the wrong side, and why is she dressed up like Jimi? Is it an attempt to recreate what happened (or what should have happened) in Liverchester ten years ago?

We do get the answer to one mystery, at least, which is how one becomes a Player. Turns out, all you have to do really is just wish hard for it. A little underwhelming, but it beats super-special genetics or other forms of Chosen One-ness as an explanation. 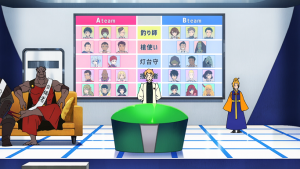 Tower of God #7 – After everyone’s had a chance to sort out their differences, heal up, train some more, and make friends, the announcement comes down that the final exam of this phase will be a game of tag.

I don’t know why Lero Ro seems so disappointed by it; he should know he’s in a shōnen story by now, and children’s games taken to ludicrous extremes are a staple of the shōnen genre. The only unusual twist I expect here is for Khun to display his talent at breaking the system and come up with a way for everyone to pass. Or everyone he likes, at least.

Meanwhile, Bam’s talents continue to consist of looking sad and trying to please everyone. It was nice to be able to entertain the idea, when Bam showed up at Endrosi’s room with a plate of food and an offer for a deal, that he was finally getting his feet underneath him and figuring out how to make something happen. But no, it had to turn out to be all Khun’s work again. 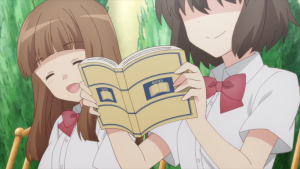 My Next Life as a Villainess: All Routes Lead to Doom! #7 – Caterina’s class’s first big exam is an old-fashioned team dungeon crawl through a maze of magical traps. It quickly turns out that there’s nothing she can’t accidentally flail her way into, including the solution.

It’s nice and all to see everyone join forces to save her, but the true big moment of this episode is the very beginning, when Sophie can remember in dreams that she and Caterina were friends in a previous life. Then, as now, Sophie was the quiet one, hiding her weirdness until she found a fellow geek. Caterina was not only proud to be odd back then, but just as bad about studying.

There’s an entirely different sort of doom flag hovering over Caterina now. Stories where events from a past life repeat tend to complete the repetitions, especially if they include an untimely death. If the romance plot doesn’t get her, Caterina may have just two years to live anyway.

Dee, disillusioned with life and working as a cam girl to make ends meet, helps a strange client, starting an unlikely friendship that might save them both.