In this week’s viewing: It’s a very bad week to discover you have a parent involved in criminal activity. 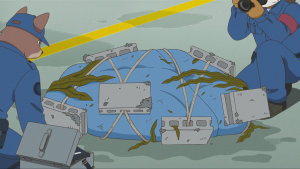 Odd Taxi #7 – Odokawa and Dobu set out to find Odokawa’s mysterious stalker, only to discover that searching for someone in a Halloween mask on Halloween is harder than it sounds. Meanwhile, it turns out that Shiho was drawing Kakihana into an extortion scheme, but the joke’s on the criminals since Kakihana has no money to extort. They do not seem amused.

Strike everything I said before about Yamamoto being safe to be around, since it turns out that “working with” Tapir Yakuza Guy is more than just some shady business connections. He’s actively deploying his idols for criminal work, and probably has been doing it for a while. Now we know that the body from the start of the show is a young woman, that’s probably his daughter, disposed of by Yano, who wants the dashcam footage because it’s evidence that could tie the yakuza to her murder.

But if the missing young woman is dead, then who or what is hiding in Odokawa’s closet? Could it just be the cat from the opening credits, as some have suggested? A ghost, since he just admitted to “something like” being able to see auras? Or could it just be a hallucination? Even with his clinic closed, Gōriki is still working on Odokawa’s illness, and the presence of a brain scan in his file suggests it’s something neurological.

Odokawa has more immediate concerns, though, as he’s now been caught on video associating with Dobu. Dobu, one has to admit, is not very good at his job. He lost his gun, and now he’s beating up the wrong guy about it, and in the process he drops his guard so far that the vigilantes who are after him are able to spot him. You wonder if Yano’s side of the organization has been encouraging the online mob to get rid of an underperforming employee. 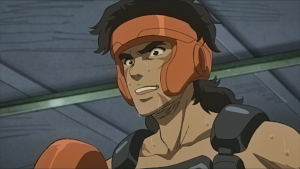 Megalobox 2: Nomad #7 – Joe doesn’t have time to approach Yūri on his own, because a scheme to put Joe in Liu’s way brings them all together instead. But if it was a cunning plan to make Joe miserable, it backfires horribly.

Nomad certainly wants us to think that Santa is up to no good when he lets Liu know that Joe is back in town and then spies on the two of them. But even though he claims to be driven by profit afterward, he seems happy enough that Joe is regaining his fighting spirit. A split seems to be opening up among Joe’s orphans, with Santa and Bonjiri supporting him, and Sachio and Oicho against him.

Up next, the spotlight turns to Liu, and his upcoming fight with a true cyborg. Among the backers of Liu’s opponent Mac Rosario is another familiar face. Shirato Yukiko is the head of the Shirato Corporation, the company that made the one-of-a-kind implanted Gear that Yūri used to wear. Having the implants removed so that he could fight Joe on an even footing, plus the stress of the fight itself, is what crippled him.

And one more old enemy turns up at the last minute. Shirato Mikio is Yukiko’s older brother. He’s also faced Joe, using AI-enhanced Gear, and lost. What’s he up to now?

Regardless, Joe seems the happiest he’s been since the start of the series when he’s in the ring sparring with Liu. If they fight another match, he might hold his own. But after that? It’s likely true that the day Joe leaves the ring behind is the day he dies. Again, the ending of the manga this is inspired by is not a very happy one.

Mars Red #7 – After a major earthquake, tsunami, firestorm, and the suicide of a friend, Maeda is just trying to die quietly when DeFrott turns up and informs him that he most assuredly does not get to do that until he fixes the mess that other humans have caused with their drugs and their vampire soldiers and so forth.

The truth of Misaki’s death is mostly revealed at last: she overheard what her father was up to, was killed in what appeared to everyone to be an accident but was probably engineered by his associates, and then DeFrott made her a vampire so that she could fulfill her dying wish. Since then, Maeda has revealed that Misaki also asked him to stop her father, so as DeFrott sees it, Maeda had better get busy with that, and DeFrott can spare a drop or two of blood to help out.

Going by what Misaki could do, Maeda is now going to be a far more powerful vampire than any of his comrades. Possibly S-class, in which case, what does that make DeFrott? He’s more powerful than anyone we’ve met. Could he be the one who turned the British vampires? Or is there someone of equal power lurking behind them? 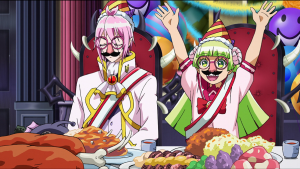 Welcome to Demon School! Iruma-kun season 2 #5 – Back home again with his doting grandfather, Iruma has to the navigate new and terrifying social territory of having friends over. After that, facing monsters in the basement is a relatively mild challenge.

It’s cute to see Sullivan so worried about Iruma seeing him as powerful, because this is the same guy who, last season, casually punched a hole in the wall of a high-security demonic institution and then went over to Bablys and stopped time. You’d think he has nothing left to prove!

We are reminded once more that Iruma never had any chances to be around other kids his age before being carried off to the demon world. He spent much of the first season adjusting to the idea of being even allowed to have friends, and mostly has the hang of it now, but there are apparently still moments when novel social situations can throw him for a loop.

This reminder of his past development is set against an entirely new phase in his life, as Alicred tries to be helpful by inducing a major personality change. Now it’s time to see what havoc Iruma can wreak when he comes into his own as a moody adolescent. 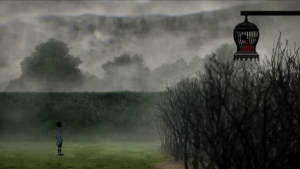 Shadows House #6 – The dolls flail onward as the debut continues. They manage to figure out a puzzle and unlock the door to the labyrinth, where the real challenge begins. Now they have to beat the hidden dangers and retrieve their shadow masters before the arbitrary time limit runs out. And Edward is not the only one watching and judging them.

Although no one has spelled out all the rules of the debut, some of them are coming into focus. Dolls should follow orders (“eat your sweets”) and work together if necessary. On the other hand, they have an individual duty to their masters which should trump any loyalty to each other. The shadows aren’t punished for disobeying orders, and use of soot-related powers seems to be fine.

There also seems to be something unusual about Kate herself. Whatever it is, it means Edward is biased against her, and the other shadows monitoring the debut are particularly concerned for her. It may be the reason that John has decided to propose to her as well. Is it the ability to manipulate soot? Or is that just a symptom of some larger ability?

The Fallen Magical Girl is a trope as endemic to the mahou shoujo genre as the transformation sequence.  Though she once swore fealty to ideals of love and justice, now she obeys only herself, or perhaps the whims of some dark master. Her altruism has been gouged out, her idealistic nature soured. She is bitter […]