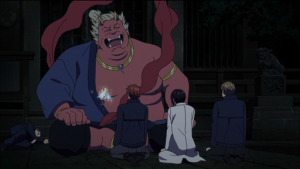 Midnight Occult Civil Servants #4 – After the zombie incident, it’s back to everyday work for the Nighttime Community Relations office. While his would-be boyfriend stays home to play with the cat, Arata joins his co-workers in a series of welfare checks on some isolated members of the community, but building bridges leads to a drinking contest and a frantic stagger back to the office to fill out the resulting paperwork while drunk. I’d love to be the person who gets to read those reports.

Oni, translated as “ogre” or “demon”, are usually portrayed as savage monsters, but the Inari Kio Shrine is a real-life place where an oni is venerated. And not just some random oni; the title Kiō means Gongen is a king.

This show is not letting up at all in its mad scramble through world mythology nor its cosmopolitan view of modern-day Tokyo. Shinjuku’s isolated spirits include everything from figures of Greek myth and legend to a native haunt, a guardian of the underworld, and a West African-descended shapeshifter. 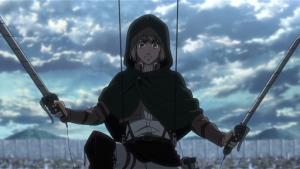 Attack on Titan #50 – In the dark of night, the Survey Corps hurries to Wall Maria for a decisive strike to retake Eren and Armin’s hometown, the place where the Titans first reappeared after a hundred years of peace. But instead of a battle, the Corps finds an eerie quiet. And then Armin discovers coffee…

After seven months of waiting, the most terrifying moment in this episode is when it looks like it could just turn into a recap of the story so far. Thankfully, that’s left for the end credits, where you can reminisce about just how many of Eren’s former comrades have turned out to be enemy Titans in hiding. Instead, it turns into a battle of wits as the Corps confronts the information imbalance between them and their still mysterious enemy.

Part of that imbalance is lack of information about the world beyond the Walls, including its peculiar foods. The coffee thing is an interesting slip in the worldbuilding here. The society inside the Walls has drawn almost exclusively from European historical imagery, so it’s odd to suddenly have them be familiar with tea, but not coffee. 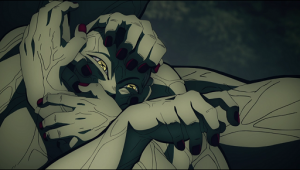 Demon Slayer: Kimetsu no Yaiba #4 – Tanjirō arrives at the testing ground with no time to spare before the Final Selection begins. The method is brutally simple: students are turned loose inside a containment area full of imprisoned demons, and whoever manages to go a week without getting killed passes. It turns out there are some potential flaws in this method, like the chance that a demon that isn’t killed in a year or two will become powerful enough to defeat even the strongest candidates.

The demon has an interesting question for Tanjirō based on Japan’s way of counting years. Although the Gregorian calendar has seen official use in Japan since 1863, it still exists side-by-side with Japan’s old way of counting the years, which is a regnal system.

You may be aware that Japan has just passed from the Heisei to the Reiwa era with the retirement of Emperor Akihito. It was Heisei 31 through the end of April, and now Reiwa 1. Future years will break with the Gregorian calendar, so Reiwa 2 starts January 1, 2020, Reiwa 3 is 2021, and so forth until Naruhito either dies or is permitted to abdicate. Demon Slayer takes place in the Taishō era, which began July 30, 1912. The demon was captured in the Keiō era, which lasted from May 1, 1865 to October 21, 1868. If it’s been stuck on the mountain for 47 years, that means its fight with Tanjirō happens sometime between August 1912 and October 1915.

All of which is somewhat academic for the demon, since that is the last fight it will ever have. And Tanjirō seems to have found new powers in the process, unless that was just the animators deciding to make the fight look extra cool… 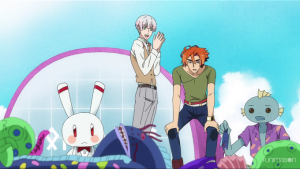 RobiHachi #4 – Deciding to take a more relaxed approach to the trip since they’ve shaken off Yang for now, the guys next fetch up on the water planet of Odawarla. Hatchi pays for an expensive restaurant meal by becoming a part-time cook and waiter, Robby gets food poisoning and falls for another scam, the Hizakuriger is almost destroyed, and somehow it all works out again.

The naming procedure for extrasolar planets in this show is now revealed to be: take a location in Japan and slightly mangle its name. There’s a place called Odawara not far from Tokyo, and the next destination of Haccone is a play on another tourist town, Hakone.

Meanwhile, some effort is put into making Yang look like not such a bad guy. He likes strawberry candies, and he adopts unwanted henchmen who’ve been abandoned by the side of the road. That was heartwarming and also very weird. Best moment of the episode.

With the belated arrival of Attack on Titan, our lineup is finally complete… oh wait, no it isn’t. What happened to Dororo? Well, while episode 16 is available at primevideo.com for most of the world, Amazon has neglected to make it accessible to the United States by my deadline for submitting this post.

With most sites, this would lead to wild speculation about failing business relationships or sudden licensing changes, but with Amazon’s past record this is probably just simple incompetence. Will the US ever see episode 16? Has the US schedule permanently slipped? Who knows? But feel free to talk amongst yourselves about it in the comments, international readers.

Buzz Aldrin Calls For “Great Migration of Humankind to Mars”

After I was introduced to pulp magazines in the 70s and read Isaac Asimov’s stories of his encounters with John Campbell back in the Golden Age, I started seriously looking for science fiction. For one thing, I picked up the rest of the Early Asimov. My parents noticed, and they got my brother (equally interested) […]