In this week’s viewing: My Next Life as a Villainess goes on vacation, Tower of God lets its hero catch his breath, and more! 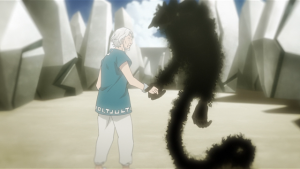 Listeners #6 – Mu and Echo make it to the land of the Gnomes, only to run into a few unexpected obstacles: everyone’s dead, Jimi never made it back there anyway, and Echo has magic tinnitus which is about to transform him into an Earless.

Luckily that last part was just something Roz made up. (Probably? Maybe?) But it seems humans can transform into Earless, because that is what happened to the Gnomes when the Earless suddenly attacked them. And incidentally, the Japanese term being translated as “Earless”, miminashi, can mean literally without external ears, but it’s also a homophone for the Japanese word for tinnitus. So there might yet be some connection there.

Living with danger is the theme this week. Just as Echo will have to deal with his sickness as long as he keeps going into battle with Mu, the Gnomes knew the Earless might turn on them someday. The question is whether the Earless went mad because of what Denka was trying to do, or what Jimi did to stop the plan. Finding that out will point the way toward whether humans and Earless can truly coexist. 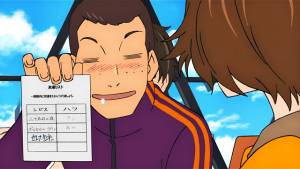 Tower of God #6 – While Bam lies in a coma, everyone else gets assigned character classes and commences training. Meanwhile, Rachel convinces Khun to help her throw Bam off her trail.

Khun winds up helping Rachel for his own reasons, and those reasons are that all women are evil temptresses who should be avoided. Still, he does finally hit on a good explanation to give to Bam, which is that maybe a woman who leaves him and goes out of her way to avoid him genuinely doesn’t want to talk to him and should be left alone. If only someone could have told him that sooner, he’d never have gone to the Tower and this story would be about someone more interesting.

Case in point: while the other classes are facing fun challenges like going on an epic mini-quest to improve their ranged attacks or making eight new BFFs, Bam’s start as a Wave Controller consists of Slacking the system administrator and asking for enhanced user permissions. Then, while he’s doing low-intensity drills, it falls to other people to uncover shocking truths and work on advancing their personal vendettas. At least the show understands this and focuses where the action is. 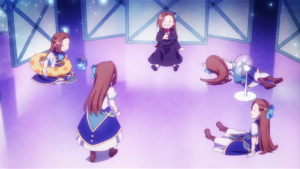 My Next Life as a Villainess: All Routes Lead to Doom! #6 – Summer vacation has arrived and Catarina immediately switches over to relaxing and ignoring all the ominous signs around her. Such as her stepbrother’s continuing insistence that she cannot be left alone with her fiancé for one moment. Or the fact that she does have homework. Or a curious remark on Sophia’s part…

We probably know why Keith is worried about Geordo. What’s going on with Sophia is new information, though. Sophia thinks she almost remembers hanging out and shopping with Catarina in a long-ago time that never existed— not in this life. What would it mean if Catarina isn’t the only person reincarnated from modern-day Japan into the world of Fortune Lover? What if everyone around her is too? How does that even happen?

Another growing mystery is the student council president. He wasn’t a major character in the game, but he winds up in Catarina’s circle of friends and even gets his own appearance in the opening credit sequence. Why is he so significant? Maybe he’s the gamemaster of this little scenario.

New Releases in Science Fiction/Fantasy/Paranormal Romance for MAY 13

If only it were this easy for writers

The Fallen Magical Girl and the Crisis of Adolescence

Some Things Are Not As They Seem