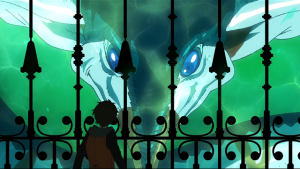 Tower of God premiere – Somewhere, somewhen, a girl decides she wants to climb a magic tower so she can see the stars. Sometime later, a boy who couldn’t talk her out of it decides to follow her. Soon he’s facing impossible magical challenges with only his determination and a magic sword that was given to him on a whim.

Viewers who are familiar with the shōnen fighting genre have all they need to get on board. There’s going to be a series of challenges with arcane rules, friendships will be formed, abilities will be developed, and butts will be kicked. Viewers who aren’t familiar with it are left confronting an episode structured like someone grafted a trailer onto the front of episode 2. Who most of these characters are, how they fit into their world, where they came from, and any other sort of scene-setting explanation is shoved aside in favor of showing off a bunch of cool monsters.

They are pretty cool, though. The inspired creature design and the production values so far are extraordinary, making this show look and sound absolutely unlike anything else you’re likely to see this season. If it could just stop for a few minutes and get us oriented next time, that would be great. 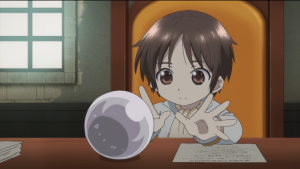 The 8th son? Are you kidding me? premiere – One day, a office worker with foodie tendencies falls asleep in modern Tokyo and wakes up as a small child in another world. His name is now Wendelin, and he is the last of eight sons of an impoverished noble family. How will he make his way in the world?

The prologue wrecks any chance for suspense when it shows that Wendelin will shortly become a typical light-novel portal fantasy protagonist who is able to cruise through life thanks to insane levels of magical power. Oh well. As for any hope that there might be some twist on the mythical tradition of seventh sons having special destinies, no sign of that.

The best one can say about this is that avoids the worst of the light-novel fantasy tropes. The protagonist isn’t an outright jerk, there isn’t any ridiculous fanservice, and the story isn’t, say, trying to justify chattel slavery. Wendelin as a small child figuring out the world he’s been dropped into is pretty adorable. But it’s still the same old, same old. 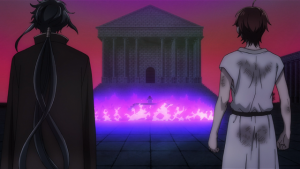 Bungo and Alchemist -Gears of Judgement- premiere – In Ancient Greece, a man by the name of Melos is paroled for a day to attend his sister’s wedding. He battles distance, terrain, and a hangover to get back in time to be executed, lest his friend die in his place. When ready to give up, he is goaded on by a most un-Grecian stranger. Because he is really Dezai Osamu, author of Run, Melos, trapped in his own book while sinister forces try to rewrite it.

There are some potentially interesting thoughts here about the role of authors, the roots of stories, and the administration of literary awards. Unfortunately, this is an adaptation of a mobile game, and what it really cares about is parading pretty-boy versions of Japanese literary greats around and watching them smack random monsters down. Probably fun if you are deeply into 20th-century Japanese literature, not so much otherwise. 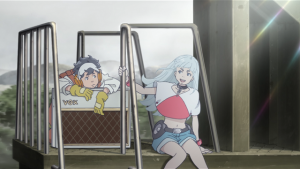 Listeners premiere – One day, a trash picker named Echo finds an unconscious young woman in the trash heap and realizes she is a Player, one of the heroes that fight the Earless, mysterious monsters that threaten humanity. Mu, as she will come to be known, remembers nothing of her past, but she pushes Echo to follow his dreams, and when the Earless abruptly come to town, she shows him that he can be part of the Player world.

“Boy discovers mysterious amnesiac girl” is a long-running anime trope, but Listeners avoids all the horrible features that usually come with it. Mu is a strong, independent personality, who can leave anytime she wants to but sees something in Echo that she wants to encourage. Echo has no special powers, but he has the skill to build an amp out of junk and a hopeless hope of escaping his current life.

It doesn’t hurt that Listeners has some of the better art this season, and while it’s big into rock mythology it’s probably not going to make us sit through a bunch of original songs. Instead, it’s going to lean on engaging characters and a world both like and unlike our own. 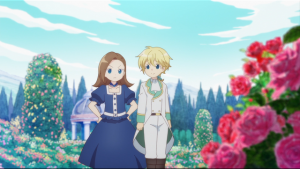 My Next Life as a Villainess: All Routes Lead to Doom! premiere – On the day when she is informally betrothed to a prince of the realm, Katarina Claes falls, hits her head, and recalls her previous life in modern Japan where she died as a teenager. One of her favorite games was set in a fantasy kingdom with four eligible bachelors to romance, and a villain by the name of… Katarina Claes.

Although it kicks off with some of the tropes of light novel portal fantasy, this functions more as the sort of time travel story where the time-space continuum tends to resist any changes. Katarina immediately tries to avoid some of her actions that will form the backstory of the game, but her ideas tend to backfire. Plus, she recalls that her husband-to-be is a manipulative liar, so no matter what she does, it may not affect what the heroine of the game thinks of her.

The art and animation here are nothing special, though there is some clever staging of what Katarina’s internal monologues as arguments among a committee representing various facets of her personality. The main selling point is Katarina herself: she’s no power-fantasy protagonist cruising to the top of the world, just a spoiled brat trying to shape up fast and not die. 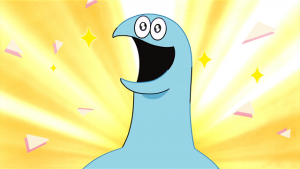 Gal and Dino premiere – After a night out drinking, Kaede makes a dubious decision to bring someone home with her. But this is no hookup; she takes in a blobby blue dinosaur that has nowhere else to live. Weirdness ensues.

To understand this show, it is first necessary to explain one from last year called Pop Team Epic. It was an absurdist mashup that brings to mind the original idea behind Monty Python’s Flying Circus, to create something that couldn’t be described. Pop Team Epic revolved around two regular characters but was otherwise a series of random skits, in all sorts of different kinds of animation, and its signature move was switching to a new pair of voice actors halfway through an episode and then repeating the first half with small differences.

Gal and Dino is Pop Team Epic II in many ways. It’s got live-action and stop-motion segments, an inexplicable veer into French, and a segment which gets repeated with a different actor. In fact, it is so much a recreation of Pop Team Epic that the original premise of Kaede hanging out with her dinosaur is completely forgotten after a few minutes.

If this appeals to you, then… you might just want to watch Pop Team Epic instead. 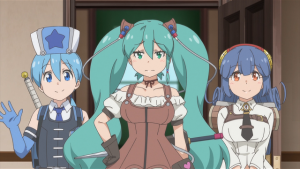 Shachibato! President, It’s Time For Battle! premiere – Minato’s dad has been missing for a while, so his dad’s secretary ropes him into taking over his dad’s company. The business they’re in is sending adventurers out to explore dungeons. Minato has apparently never taken an interest in it, but now he has to learn fast or go bankrupt trying.

There is a rich vein of satire to be tapped in a setup where dungeon crawling is just another boring old job done by regular employees of organized businesses. Shachibato! is completely uninterested in tapping it. It’s here to sell a mobile game, so Minato is hustled through a quick explanation of the game setup and then sent off to a starter dungeon to take down a boss monster and try out a side quest.

Everything about this episode is just going through the motions. Minato’s employees are kind of the same people who pop up in every forgettable mobile game adaptation. Monsters are monsters and dungeons are dungeons and no one much cares where they come from. There isn’t even anything outright bad about this show, it’s just pointless. 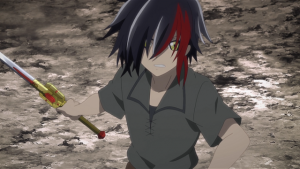 Shironeko Project Zero Chronicle premiere – In another part of Generic RPG Land, the Kingdom of Light floats serenely in the clouds while its princess and her knights occasionally see off monsters. Beneath, the Kingdom of Darkness comes off much worse from the monster invasions, and one guy has decided he’s going to become the King of Darkness and do something about it.

Most of this episode is devoted to sketching out the tragic backstory of our hero, which consists of people who’ve just been introduced dying and then him emoting about it with all his strength. All that we know about the princess up in the clouds is that she’s vaguely worried about overusing her kingdom’s magical protection. The opening and closing sequences are emphatic that the two of them are Destined To Be Together, probably after meeting as enemies, then getting to know each other better, et cetera.

I guess if you’re a big fan of the game this is based on and already familiar with the specific event this is providing the backstory for, you already know and care about these people. If you’re not, this show doesn’t work very hard trying to make you care. 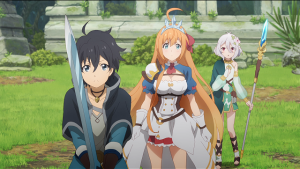 Princess Connect! Re: Dive premiere – In yet another generic RPG kingdom, a barely-verbal amnesiac named Yūki is dropped from the sky by a goddess and given into the care of her oracle. After wandering around town aimlessly for a while, they stumble into being adventurers and pick up the next member of what looks like it will be a very large party consisting almost entirely of young women.

One thing Princess Connect! has over its fellow mobile game adaptations is some actual humor, although it leaves the viewer wondering if the quieter parts have jokes that aren’t landing well or if it’s just going for complete tonal whiplash. This is balanced out by a truly useless lump of a hero, whose only apparent reason for being in the story is that he is a Chosen One. (The actual term they use is “Princess Knight”, which is the translated title of a famous manga about a princess diguising herself as a boy. It would pep up the story considerably if Yūki turned out to be a girl in disguise, but I don’t think that’s going to happen here.)

So, if you’re determined to watch an attempt to squeeze a bit more cash out of a bland mobile game, I guess this might be the show to pick.

Well then, Listeners, My Next Life as a Villainess, and Tower of God all make the cut for a second viewing. We’ll have those plus a few more premieres next time.