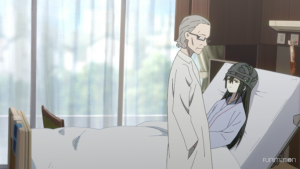 ID: Invaded #10 – Narihisago settles into a comfortable routine of home life, hospital visits, and killings, almost persuading himself that the place where he lives now is reality. And then Hondōmachi and Fukuda have to go and ruin it for him.

Narihisago admitted to himself in an early episode that he wasn’t a very good police detective. It’s certainly the case here. He’s focused on anything that could threaten his family, but he dismisses anything not directly connected with them, like Asukai’s thoughts on her impending demise, or the appearance of Shirakoma Nishio.

Asukai says she thinks she might just disperse and become part of the world. If that is what happened to her, then there’s the source of the “cognition particles” that the Kura team has been scanning for. They were never about serial killers in general; they’re traces of contact with Asukai.

Shirakoma enters the story well after you would expect. At this point, by the working hypothesis the team had before the latest dive, he should have already invented the Mizuhanome so that its prototype could be misused by John Walker. And the Mizuhanome contains the results of Asukai’s dreams, so there should have been a connection between her and Shirakoma well before this, but she doesn’t say anything about it (not that anyone bothers to ask).

With Narihisago trapped in his own well, the investigation is (literally) left in Hondōmachi’s hands. It’s up to her to examine the past to find out who killed Shirakoma, how his body wound up at Momoki’s house, and how those cognition particles from the bedroom turned out to be another link to Narihisago’s well. 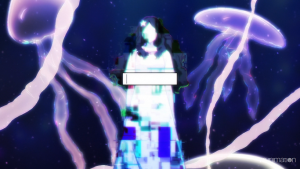 Magia Record: Puella Magi Madoka Magica Side Story #9 – Tracing the rumor of the Endless Solitude to its source, Iroha and her friends find an AI built to learn to mimic humans from their online behavior. Only instead of becoming a foul-mouthed bigot, it has somehow evolved into a compassionate, good-natured being at odds with what the Magius organization is using it for.

Futaba Sana is a variation on the hikikomori, or shut-in. She wants to wall herself off from the world, but she took a magical option instead of barricading herself in her room. And it would have all gone fine, except she picked the wrong imaginary friend.

So Ai pushes her out of her little world, forcing her to find a way to do more than hide, nicely symbolized by handing her a sword to go with her shield. “Turn off that computer and try engaging with people” is an interesting take to be getting from a story that started off as a smartphone game.

As heartwarming as that all was, Iroha and Sana are in for a fight now, as the others have just worked out that they’re about to be dropped right back into Magius territory. 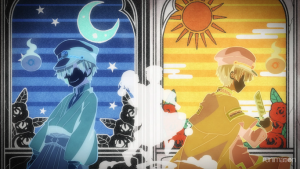 Toilet-Bound Hanako-kun #8 – Kō decides that he, personally, will fix this new haunt by working out what their troubles in life were and soothing them enough to move on. This becomes rather more complicated as he discovers that the ghost is someone he actually used to know, and that Hanako’s twin is warping him into something malign.

Mitsuba Sōsuke is the inverse of Futaba Sana above: someone who became invisible and wanted to stand out. This gives Tsukasa, as we know him now, an opening to claim that he’s a Hanako for the spirit world. Like his brother, he grants wishes for a price, only his price is that the wish backfire more horribly.

Tsukasa seems like a born griefer just looking for an excuse. It’s likely that Amane’s injuries before he died had something to do with Tsukasa— either directly or defending other people from him. It looks increasingly probable that Amane killed him to stop his cruelty, except that obviously hasn’t worked. 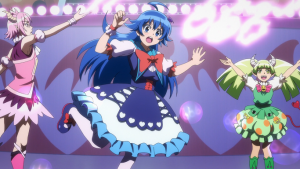 Welcome to Demon School! Iruma-kun #22 – With the opening moment approaching and Kuromu still down for the count, Iruma willing to do the most desperate thing he has ever done: embracing his ability to stand out instead of trying to fade into the background. That plus Kuromu’s family just turning out to be the sort of people who don’t express affection well saves the day.

Of course this whole setup relies on the demon world having copied the whole apparatus of rock mega-concerts except for the concept of the opening act. It’s the sort of plot hole where one is tempted to shrug and say, kids’ shows, what are you gonna do? But this kids’ show has been so well-written most of the time that to let something like this through is disappointing. 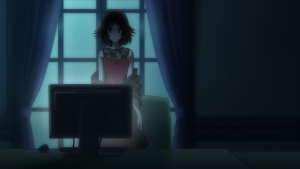 In/Spectre #8 – With their self-imposed deadline approaching fast, Kotoko, Kurō, and Saki stop sitting around talking in a hotel and go start talking in a car instead. As they reach the fateful place where the Steel Lady is supposed to appear, Kurō and Rikka begin to duel in their own unique way.

Kotoko’s explanation of how truth and debate work on the Internet is a perceptive and timely one, and I wish it hadn’t been buried under the storytelling approach for this main arc. I’ve begun wondering if this is the way it was presented in the light novels, or if the manga that this show is a direct adaptation of switched things around.

These Bizarre Objects May Have “Seeded” Supermassive Black Holes