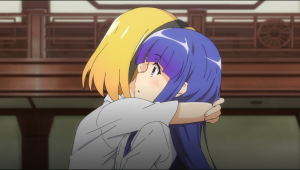 Higurashi: When They Cry – GOU #21 – After enduring a bizarre conversation in a place outside time with an otherworldly being who calls her a bunch of names she doesn’t recognize and then waking up in 1984, Satoko takes the only sensible option available to her and concludes that the last five years were all just a horrible dream. Able to see Rika as a true friend again, she opens up about her seemingly hypothetical fears, but Rika dismisses them. And then it all happens again.

If things went exactly the same way from that point onward, then Rika is correct, Satoko was the one who withdrew from the friendship first. But Rika is still making a huge mistake pulling Satoko along with her to St. Lucia’s. Of course, Rika doesn’t have the advantage, at this point, of learning from her mistakes in previous loops. It will only be later that Hanyū gives her perfect recall, when she has no chance of making it to 1989 at St. Lucia’s again.

As for all the strange names and the cat that the Hanyū-like being was throwing around references to, those appear to tie into the wider When They Cry franchise that grew out of the setting that this series is returning to. As long as it all means nothing to Satoko, then there’s no need for a deep dive that requires detailed knowledge of the franchise. 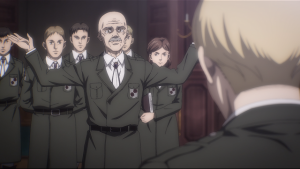 Attack on Titan #71 – It’s right around the time that their prime minister is taken out by a bomb that the Paradisians start to work out how thoroughly they’ve been played by Zeke and his Marleyan volunteers. Yelena persuaded Eren to get himself trapped in Marley, which in turn forced the Paradisian strike. Other Marleyans have been dispersed to jobs suited to intelligence-gathering, and Eren brings his own strong base of supporters inside and outside the military who are committed to the idea of the new Eldian Empire.

And after realizing all this, the best what remains of the command structure can come up with is to capitulate. However bad things are, an armed internal power struggle is only going to make them worse. And even though Eren is technically an enemy of the state at this point, just about everyone is on board with the idea that letting him help carry out Zeke’s plan is what needs to be done.

Which brings us back to the plan being that Paradis can let just a little bit of the apocalypse loose, and then everyone will politely sit down and listen to what they have to say, or at least accept them as a respectable nation that deserves to exist. It seems like it’s too late for anyone to stop Eren, unless Eren himself is just playing along with the plan for now and has a different idea in mind.

Other things it is too late to stop: another smackdown with the Titans who are still loyal to Marley, as we see they’ve already infiltrated Paradis, and Gabi and Falco being recognized by someone for who they are. 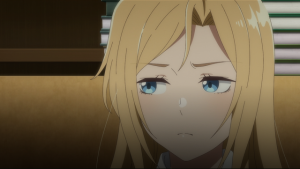 Otherside Picnic #9 – Sorawo and Toriko manage a couple of relatively unexciting forays to the Otherside, but the crazy pulls them in again when Akari tracks Sorawo down once more. This time, it’s a friend of Akari’s who’s having a bizarre experience, and yet again it somehow involves Uruma Satsuki.

After last week’s fun, the terror is back. And it’s not just the deadly nonsensical rules of creatures from the Otherside; there’s a lot more to Sorawo than previously revealed. How long has she known that she could manipulate people with her changed eye? Or is that something she could do before the Otherside modified her?

And all the talk about her hair serves to emphasize her awkwardness about her feelings for Toriko, but it brings up Satsuki again. At minimum, it sounds like she’s Toriko’s type, but her resemblance to Satsuki seems like it can’t be a coincidence. Akari does say she has a different frame, so she’s probably not actually Satsuki with a set of false memories, but maybe… related to her?

On the plus side, we finally get a statement from Sorawo filling in what interests her in the Otherside (other than hanging out with Toriko). It’s one step closer at last to filling in how she wound up lying in a small pond, waiting to die. 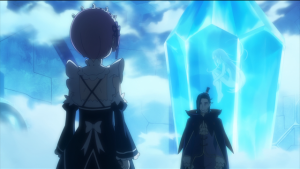 Re:ZERO -Starting Life in Another World- #46 – The attack on the mansion is coming soon, and Emilia still has two more trials to go, so Subaru has to split his army. Emilia is in a strong enough state that she can handle the trials by herself, Subaru and Otto will deliver some backup for Frederica to take down Elsa, and Ram is going to go have a big fight with another powerful magic user right next to the apparatus which powers the Sanctuary’s shield, which seems like maybe not the best idea.

We’ve never learned very much about how Ram and Rem entered Roswaal’s service. We know they’re oni (ogres or demons) and powerful fighters. We also know that Ram is strongly devoted to Roswaal. What’s new here is explicitly associating him with the people who terrorized her village, and that she is not serving him entirely of her own free will. Despite all that, she cares for him enough to want to pull him away from Echidna.

On the beastperson front, I feel like Garfiel’s half-human status shouldn’t have been treated as a huge revelation. We knew that Frederica and Garfiel had different fathers, but also that Frederica had a human mother, so it should have been obvious. This would raise the question of why Garfiel stayed at the Sanctuary for so long, but his personality answers it pretty well.

Just four shows today, because Wonder Egg Priority decided to take the week off and do a clip show. This is sometimes planned for the exact middle of a season, but coming this late it suggests unexpected production delays…

Santiago Páez, Ecuadorian SF author who is revitalizing the genre