In this week’s viewing: ID: Invaded tries to put a genie back in the bottle, Toilet-Bound Hanako-kun transplants a legend, and more! 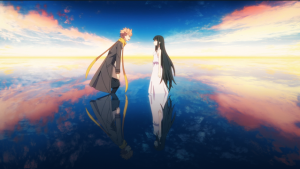 ID: Invaded finale – While Narihisago, Hondōmachi, and Fukuda work together to trap John Walker, Momoki tries to enter the Kura building to confront Asukai, and the rest of the Kura team just tries to stay alive in the expanding dreamworld. Though all the detectives do their best, it really comes down to the decision of one person, to continue as the Mizuhanome or not.

To have Asukai just go back into the machine may feel unsatisfying, but consider how much worse an ending it would be to wave a magic wand and make all the problems vanish. If a solution came out of nowhere to suppress her powers, or if Fukuda were suddenly brought back to life, or if Narihisago were arbitrarily released from prison by authorial fiat, it would feel less true to what has come before.

And Asukai’s main problem is solved: with John Walker now out of commission, she will have no more nightmares of being murdered. Now, as Sakaido says at the very end, he will meet her alive, and she can just tell him the new mystery he has to solve. And as for being reduced to a tool, well, she’s already demonstrated that she can work against her controllers if she wants to. 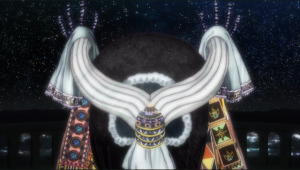 Magia Record: Puella Magi Madoka Magica Side Story #12 – Iroha gets a magic PowerPoint lecture from Ui’s old friend Tōka, and Rena and Kaede get a hushed infodump in the rain, but the story is the same. Yachiyo and Mifuyu’s old gang found out the hard way what fates are store for all magical girls. But Tōka has come up with a way to cheat the system.

The connection between magical girls and witches, and the reason Kyubey does what it does, are the big revelation at the heart of the original Puella Magi Madoka Magica. It was handled rather better there, and I think this series presents it more casually because it’s assumed that the viewer is already familiar with the first series.

The Doppel business is entirely new to this story, though. As Tōka describes it, it’s the ultimate cheat: endless Soul Gem regeneration, no Grief Seeds needed. And yet Yachiyo is not on board with it. What’s the catch?

Tōka also claims she’s never heard of Ui. Which is plausible, given that even Kyubey doesn’t remember who Ui is. But Ui was right there with Tōka when Tōka was first showing her inventive side. I suspect she may have been on the losing end of some early Doppel-related experiment. 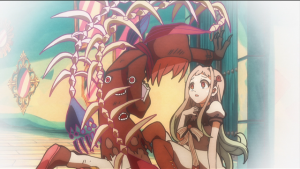 Toilet-Bound Hanako-kun #11 – Before Hanako can make it into the mirror world, Tsukasa forces Mitsuba into a grisly ritual that grants him the power to be the new School Mystery #3. And then when Hanako does turn up, Tsukasa reveals the truth of what Mitsuba is. But that doesn’t stop Mitsuba eventually coming to his senses and resisting the urge to become the thing Tsukasa wants him to be.

So Mitsuba is revealed to be a fake, dreamed up by Tsukasa because he wanted to try creating something. In a way, Tsukasa has succeeded— his creation has developed his own will, and Mitsuba chooses to not become the destructive personification of rage that Tsukasa was aiming for.

But now, as School Mystery #3, Mitsuba must be subject to the altered rumors, so it seems that Nene and Hanako will need to eventually come back and collect his Yorishiro. I’m guessing it’s that notebook, rather than the Yorishiro of the old #3.

Incidentally, there was a little foreshadowing of all this in Mitsuba’s name, which means “three leaves”. 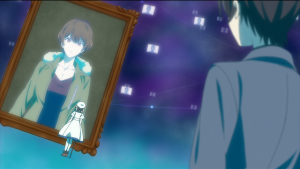 In/Spectre #11 – With Rikka on the ropes, Kotoko goes for the knockout blow with her final theory: Nanase Karin didn’t die. She fooled someone else into taking her place, and is now living incognito, encouraging the myth of her own ghost to throw people off the track.

On the one hand, I can appreciate the cleverness of this final solution, in how it approximates the real truth in an important way. And the author is certainly adept at invoking the worst parts of Internet arguments, like the demand to prove a negative and the accusation that the moderator is part of the conspiracy. On the other hand, it isn’t any more fun than watching actual horrible Internet arguments play out.

This week, Steve reviews the new(ish) movie Blade Runner 2049. Does he like it? Have you seen it? Did you like it? Check out the review and see if you agree!

What the Hell Are You Doing In the Bathroom All the Time?