In this week’s viewing: SSSS.Gridman gets recursive, The Girl in Twilight gets delusional, and more! 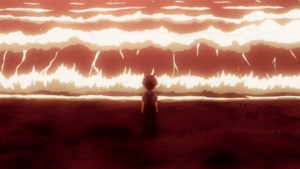 The Girl in Twilight #10 – Asuka is a great example of the anime archetype called the genki girl. (Genki is Japanese for spirited, energetic, etc.) Genki girls are relentlessly cheerful and positive, and tend to make up for a lack of skills by overpowering obstacles and opponents through sheer force of personality. Genki girls are determined to make everyone happy whether they like it or not.

Someone involved in setting up the story for this show is really tired of genki girls.

Suddenly Asuka is less the life of the party than a person who is clearly unhinged and needs help. Faced with loss and tragedy, she retreats into denial. And while she has the potential to become the warrior she’s seen in action, some version of her was also willing to join forces with the King of Twilight.

It keeps coming back to Kyōhei’s disappearance. He seems to have vanished the same way in every timeline: one moment of inattention on everyone else’s part, and he seemingly popped out of existence entirely. And that’s probably what actually happened, in some sense. But where exactly have all of him gone, and why? 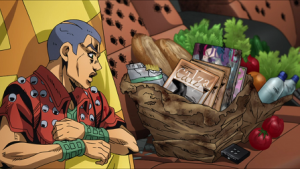 JoJo’s Bizarre Adventure: Golden Wind #9 – Every story arc of JoJo, there’s one guy who is revealed to be especially bad by committing casual animal abuse. There’s your one, and if that was upsetting to watch then you at least know it probably won’t be happening again.

The reveal of the hiding place of the treasure is an anticlimax, but it shows that Bruno is a guy who simply gets the job done. He’s been an effective subordinate, and that along with the stash gets him promoted to head manager of the Naples office, with all the new revenue streams that implies. But it also means taking care of his predecessor’s unfinished business.

Trish is presented as spoiled and useless so that Bruno has to guard her and her taste in fashion can leak the fact, but she’s also competent enough to maintain the janitor disguise. Hopefully this is a sign that she’s not going to be a total damsel in distress.

She’s lucky she has multiple guards, anyway, since Narancia so far appears to be useless at figuring out what his opponent is up to. Bruno was certain that Narancia’s Stand would keep him from being followed, but it isn’t clear why yet, so perhaps it has some further useful ability. 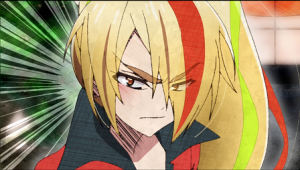 Zombie Land Saga #9 – It’s Saki’s turn to confront her past. True to her biker persona, she went out in a blaze of glory, proving she was the toughest and most fearless girl in town. Her death scared her best friend straight, but didn’t stop the endless cycle of adolescent rebellion, and she gets to re-enact her most memorable moment in order to end a gang feud.

Saki comes up with a clever solution to the problem of explaining her mad biker skillz, but, just like last week, some of the drama feels forced due to the arbitrary requirement of not telling absolutely anybody what really happened. What Kōtarō says about idols needing to avoid violence and protect their public image is absolutely true, and Saki’s “Leader for a Day” idea would still be just as good even if she were to tell her old friend that she’s survived (in a manner of speaking).

Still, any episode which can work in an appearance by Policeman A is one of the better ones. 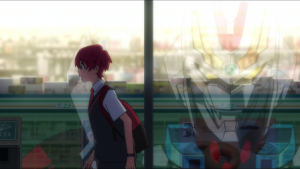 SSSS.Gridman #9 – Yūta wakes up on a couch without his memories once again, and relives his whole first day of amnesia. Except this time it’s Akane helping him out. Shō relives his discovery that he and Akane are both fans of TV monsters and develops a whole friendship. Rikka is Akane’s friend again. And then all three of them work out that something is wrong and they’re trapped in a dream.

Knowing that the main studio behind this show isn’t afraid to let its fanboy heart show, and also knowing the long shadow that the classic Neon Genesis Evangelion casts over many shows made since, it’s hard not to see this as a shout-out to a particularly memorable moment in Evangelion involving an alternate dream world where some of the traumatized characters are living a relatively happy, normal life. In that case, it was a demonstration that the character who mentally constructed the world can imagine other options for himself; here, it’s another iteration of Akane’s unhealthy obsession with shaping everything to her liking.

It feels a little redundant in this case, when everyone is more or less in agreement that they’re already trapped in an unreal world. The real point of this episode seems just to be to create an opportunity for the weapons to show off their Gridman-free combo mode, anyway. That box checked off, perhaps we can see some forward motion next week.

There’s no new episode of Double Decker this week and no explanation for why, which raises the dread specter of production issues. Crunchyroll assures us the next one will be posted at the usual time, so ’til next week!

Superman The Movie: 40 years on, it’s the Marvel fans who should love it

Steve reviews a book and a movie that he enjoyed.