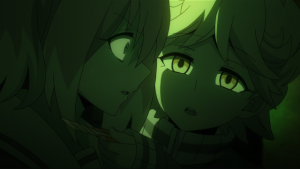 Talentless Nana #9 – Nana outwits Kyōya once again, sidelining him until he can rebuild his trust with the rest of the students. Just when she has a chance to breathe and finish cleaning things up, another one of her classmates has to go and reveal a hidden side, followed by revelations that the whole academy setup is far more screwed up than even she realized.

The whole zombie army that Yūka raised dates from five years ago, when an entire class formed sides and was abandoned to battle it out, leaving only one survivor (that we know of). And the first person to die was named Nakajima. Which, you may recall, was also the family name of the first person Nana killed.

Now, that’s not a horribly obscure family name, so it could be a coincidence, but since that sort of coincidence hardly happens in fiction, and Kyōya had a sister caught up in the same event, it seems like the powers are recurring in specific families. This would change the program to suppress superpowers from one about killing random mutants to one of attempting to erase specific family lines. Would this change Nana’s views on the morality of what she’s doing? 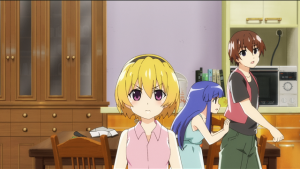 Higurashi: When They Cry – GOU #9 – A simple off-the-cuff cooking challenge leads to Keiichi nearly burning down his own house, but he is saved by Rika and Satoko. Although humiliated in the kitchen, this gives Keiichi an opening to possibly serve as a substitute older brother to Satoko, who is orphaned, missing her only sibling, and surrounded by creeps.

The girls happening to be cycling by just when Keiichi’s stir-fry experiment goes up in flames is the sort of coincidence that is far easier to swallow when you know Rika has been through this time loop a bunch. Likewise her firm determination to get a trustworthy older person connected with Satoko; it doesn’t matter what Satoko has told her this time through, at some point Rika has to have found out that Satoko is being abused and Irie is not a good choice to protect her.

Satoko also needs protection because her family all seem to have been conveniently cursed. Her parents were pro-dam and died under suspicious circumstances on the usual day, and her brother disappeared later (and is presumably at the bottom of that well on the Sonozaki property). Now we know why Satoko was staying at the temple with Rika the first time through— but that didn’t save her, so Rika needs to find someone else to do that. Given that this show is meant to run through March, that means Keiichi is going to find some new way to let the two of them down. 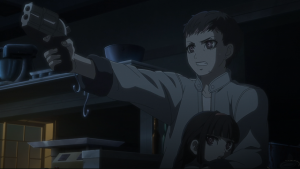 Akudama Drive #8 – The condition of the Moon ceases to be an issue for the Swindler and Sister when the rocket falls back to the Earth not far from where they started. Left as the only person to protect Sister, backed into a corner, the Swindler finally finds she has it in herself to commit homicide. But she isn’t the only one for long, as events conspire to bring almost the whole gang back together again.

So it turns out the Hoodlum was planning to sell everyone out, only the Doctor beat him to it. When she comes back to rub it in, one element of his plan is still in operation, tracking Brother. Only it isn’t, because Brother’s last act before disappearing into the Executioners’ hands was to hire the Courier to take it to Sister. And the Cutthroat is still out there somewhere, following a trail to the Swindler.

So, what next? Either the Swindler has to spend some time trying to go underground permanently and live like the Akudama until the Executioners get back on her trail, or she’s immediately going to insist on putting together a plan to rescue Brother. One way or another, it seems like she’ll eventually have to confront Kanto. 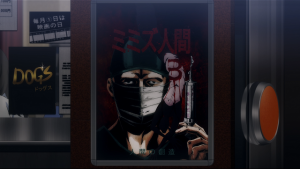 Jujutsu Kaisen #9 – Since he’s still officially dead, Yūji’s training continues with an introduction to a sorcerer working outside the school and a chance to get involved with a typical investigation. This lasts long enough for his new partner Nanami to realize this is no typical incident and send Yūji off on an errand to keep him out of the way of the big fight.

And while they’re both busy, the newest villain provides some handy exposition for everyone about what’s going on. Building on the previously introduced concept of curse entities coming into being where fear accumulates, Mahito explains that the new wave of special-grade badguys is nothing less than the spirits of all the things that people have feared for centuries.

With Mahito’s patchwork face and his power for body modification, I’d guess that he represents the fear of surgery. Which makes this a very apropos moment to have brought in a nod to The Human Centipede. (If you’ve never heard of it, let’s just say it’s a great movie to represent surgery-related body horror and leave it at that.) 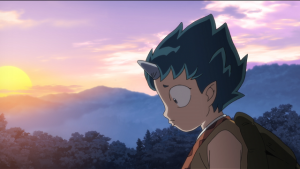 Yashahime: Princess Half-Demon #9 – Konton, the next of Kirinmaru’s henchmen, swans in from China and destroys a whole compound because he thinks it’s tacky, then sits and waits for more victims to come to him. Soon he is forced to face the three part-demon princesses, who bring a tougher fight than he expects, because they are aided by none other than Meifuku, son of Gamera! Sorry, I mean son of Meiōjū, whose resemblance to any other copyrighted characters who look like giant turtles, and can fly through the air and blast their enemies, is purely coincidental!

In the longer term, Tōwa is still trying to figure out how to track down the Dream Butterfly. Jūbei suggests capitalism: post a bounty for it, and surely someone will show up to claim it. Except the only person who seems to be claiming bounties from him these days is Moroha.

And there seems to be just one person posting bounties, as well. Riku the mysterious pirate, who could allegedly take out all four Perils by himself, is for some reason letting the girls do his dirty work. Is he just lazy, or is there some other motive?