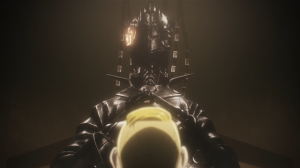 No Guns Life #8-9 – Mega Armed attempts to justify his actions, then gets smacked down by Inui, then gets even more thoroughly cleaned up by other agents of Berühren. In the lull that follows, Tetsurō nearly gets Inui to start opening up, but gets distracted by a charming client of Mary’s who tries to get him further entangled in the struggle against Berühren.

The full story on the Nightmare of Norse Scott is that the military police were coming to shut down extreme human experimentation being conducted by the army. Mega Armed manipulated Gondry in to killing them and continued to murder people to cover it up all the way to the present time. Here’s another WWII parallel: the Japanese Army conducted large-scale, horrific human experimentation during the war. In contrast to what happened to the Nazis, the Japanese doctors were given full immunity by the US in exchange for their data, and the leader of the whole effort, Shirō Ishii, is known to have visited the US later on as a guest of the US Army. The Japanese government didn’t get around to admitting the experiments had happened until the 1980s. (Lots more details here, if you really want them.)

A couple ways in which the recent war differs from WWII, though, are that Japan (allegedly) won this one, and it lasted half a century. Also this war seems to have been instigated entirely by Berühren to give it cover for the development of cybernetics, in service of some creepy techno-utopialist-sounding plan.

Which brings us to Spitzbergen and its enigmatic leader who is almost certainly Mary’s big brother. We can assume they know what Berühren is really up to. What we don’t know, and I presume we’re about to find out, is whether their cure is as bad as the disease. 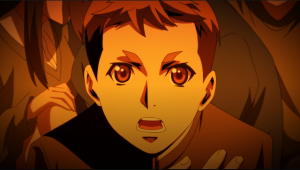 Special 7: Special Crime Investigation Unit #9 – After a break for a recap episode, the Airport Attack conspirator who was recently captured in Germany has been extradited to Japan. Warlock follows his established pattern by sending a first wave of incompetent goons, then finishing off with the competent people. When all is said and done, the members of Unit 7 have a much better understanding of people’s histories, and Seiji has… a mysterious fake eyeball.

Nijō turns out to be Mizuwa’s genuine adopted brother. (Nī-san, the term for addressing an older brother, can also be used for non-family members in some circumstances, so it wasn’t clear until now that they were actual family.) He changed his name to hide the connection, presumably to avoid being kept away from investigation of the attack (a baseless concern, it turns out, seeing that everyone was fine with sending Seiji in). All this time he’s dedicated himself to finding Mizuwa’s killer. He’s taking some time to absorb the idea that Mizuwa isn’t actually dead, because then what was he going to do?

Seiji survived some kind of ritual that Warlock specifically wanted a child for. That has to be linked to his unusual toughness, but was he picked because he already had some kind of affinity for magic, or is that what granted it? And what did Warlock want a child involved for anyway? Has Seiji been turned into an unwitting mole?

Finally, Ichinose has been stumbling around in the fog. His partner died, the younger brother vanished, Nijō hates him for no apparent reason, and now he finally knows what the heck was going on. Does this lead to a reconciliation, or do he and Nijō just decide they’re more comfortable as antagonists? 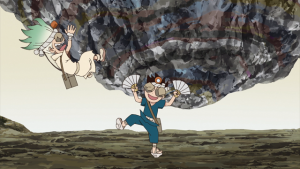 Dr. Stone #22-23 – On the journey into the depths of the caves, Magma decides he isn’t going to murder Senkū and Chrome after all, so they return with all the tungsten they need. One incredibly complicated furnace, one incredibly complicated vacuum pump, and a whole lot of chemistry later, they finally have Senkū’s secret weapon: the wireless telephone!

Your local pedant would like to remind you that this is not a cellphone, as the English subtitles claim, because there is no cellular network involved. Likewise, it is not a mobile phone except in the broadest possible definition of the term. It doesn’t do much better in Japanese: the equivalent term is keitai denwa “handheld phone”, abbreviated to keitai “handheld”, which Senkū’s invention most assuredly is not.

As for winning over Magma, no points for suggesting that cuddling would be a fate worse than death. (I’m sure there are at least a dozen fanfics out there addressing that point.) But it is a nice moment when it becomes clear that Magma isn’t just thinking about the village’s chances against Tsukasa. Somewhere under that thick skull, he has a sense of wonder, and feeding that is what saves Senkū. 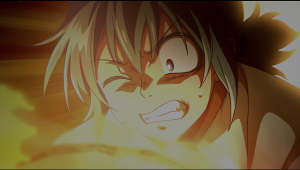 Welcome to Demon School! Iruma-kun #9-10 – After a great deal of thought, Iruma decides that he might like to try raising his rank a little bit, maybe, just once for now. This being the demon world, it means he suddenly has to learn to play extreme magical dodgeball in just a couple days.

Well, this is a another couple episodes with Important Life Lessons for the target audience. See, kids, if you work hard and leverage your talents, you too can make progress in school, even if you are the normallest of normies and your homeroom teacher is awful! And submitting to the system will feel great, we promise!

We’re nearly halfway through the show, so there isn’t time to take a couple episodes for every step in rank if we’re going to see Iruma make it all the way to Demon King. Sometime in the next couple tries, Kalegle (or someone) is going to have to let him move up faster. 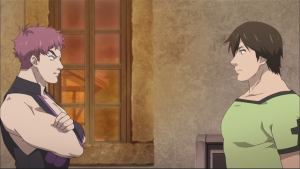 Kemono Michi: Rise Up #9-10 – The princess tries to get Genzō to take up his post as the beast-slaying hero, but to no avail. Hiroyuki gets stolen and returned, and Genzō sees hope for the pet business if he ever manages to get the store opened. But all this is just more delay before the part we’ve all been waiting for: MAO, finally, having walked halfway across the world gathering his followers, turning up at Genzō’s place and inviting him to pick up where they left off.

At long last, it is on! Genzō is more than happy to have a rematch, the promoter and Shigure are both on board, and there are plenty of volunteers for the undercard. Time for some serious wrestling!

The one little element that may surprise everyone is MAO’s discovery of the dog that looked like a purple version of Hiroyuki. Remember that no one in town knows what Hiroyuki is. MAO’s manager, though, says it’s a creature called a garm (presumably named after one of the wolves of Norse myth). Is that what Hiroyuki really is? Was he secretly a visitor to Earth all this time?

J. Jay Jones surveys the history of David Weber’s Honor Harrington universe and then offers up some second-hand critiques.

This week there was only one thing I could write about. Man of Steel. I saw the film and it was amazing. I personally think it is the best outing of Superman ever. Zack Snyder and Christopher Nolan have produced what is a brilliant new Superman franchise. If you loved the Dark Knight trilogy and are […]

MOVIE REVIEWS: THE AUTOPSY OF JANE DOE and THE GIRL WITH ALL THE GIFTS