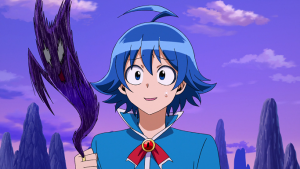 Welcome to Demon School! Iruma-kun #5 – Safe and sound after inadvertently defeating yet another powerful foe, Iruma finally finds out the full status under which he will be enrolled in school. Unlike Hogwarts, Bablys has a ranking owl rather than a sorting hat. Like Hogwarts, though, its sorter will occasionally disgorge a major artifact.

Well, there’s a possible answer to how Iruma’s going to fake his way through magic school. Just top up his ring from time to time with some power from Sullivan, or from any further classmates who attack him, and he should be able to display enough magic to pass. It’ll still be obvious that he’s had little practice, but Kalegle expects nothing more of him already.

Iruma’s hopes to become a nonentity have been dashed once again, in both the short and long terms. Not only does his lack of ranking make him notable again, there’s a whole prophecy out there pointing to his eventual rise. Sullivan being a powerful and knowledgeable demon and all, you wonder how long it’s going to have to be before he lets on that he’s noticed Iruma starting to fit the prophecy. 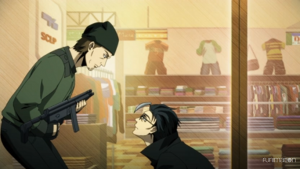 Special 7: Special Crime Investigation Unit #5 – One mention of dragons is enough to give the special unit jurisdiction over a terrorist attack at a local mall. The detectives face off against the script kiddies of terror, but lurking among them is a pro. And not just any pro.

The missing ex-detective isn’t just a terrorist’s right hand now, he appears to be the guy who inspired Seiji to become a detective. So either he’s had a major change of heart or he’s in very, very deep cover. Whatever he says to Nijō at this point is unlikely to clear things up.

In a show full of distinctive character designs, it also stands out that he used to look an awful lot like Seiji. I’m not sure what to make of that yet.

The terrorists’ plan appears to be to hold some kind of sacrifice. It’s explained that this is the only way for ordinary people to access magic, since the government maintains exclusive control over the magically gifted. Having Bellemer in some kind of conservatorship arrangement with the boss suffices, apparently. Was Seiji moved to the unit to put him under their control before Public Safety could collect him? 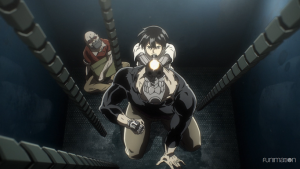 No Guns Life #4 – Sure enough, Tetsurō has to be ousted from Inui’s body before their cyborg attackers can be defeated. And even then, winning requires breaking out the big gun— literally.

Tetsurō is learning very quickly about acting responsibly. He understands now what Inui was trying to tell him about it being impossible to get immediate vengeance for everything. Inui’s little talk about tools was a point well taken. And when he has a chance to fire the head-gun, he understands it as being willing to stand up and take responsibility for achieving the end that he wants.

Inui is very firm once again that the only people who get to fire the gun are those he accepts, and he isn’t planning to let anyone get that close to him. But letting Tetsurō fire it, even just once, even though he walks away from Tetsurō shortly afterward, says he has accepted Tetsurō at some level. They’ll be back together soon. (They kind of have to be, since this series is supposed to run for six months.) 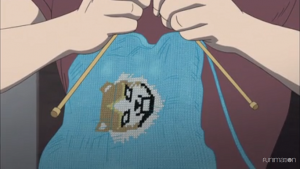 Kemono Michi: Rise Up #5 – The Macadamian Ogre is not happy about his opponent’s sudden vanishing, nor does he take the opportunity to claim a default. Instead, he is heartbroken at losing the chance to take on his old nemesis, and sinks into a funk until he too is summoned to a magical world by people who are about to be very disappointed in what they have called forth. Meanwhile, the wolfman tries to get his revenge with a plot worthy of a Chuck Jones cartoon, which ends in an equally worthy way.

It’s quite a coincidence, Genzō’s #1 rival turning up just as he’s recalling how much he enjoys wrestling. And just as some people are being entertained rather than terrified by it, too. This could probably be another moneymaker for him. For both the wrestlers, if the Ogre is willing to play the heel. 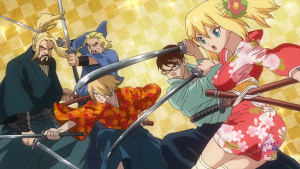 Dr. Stone #18 – Suddenly the vanguard of Tsukasa’s army arrives, and all Senkū can do is bluff and buy time to introduce the villagers to a unique Japanese weapon. Then Tsukasa’s leading warrior shows up and accepts the challenge by introducing everyone to something much stranger from the traditional Japanese arsenal.

Good thing everyone’s obsessed with melee weapons, because one longbow shooting from the cover of the forest would have nullified all of Senkū’s fancy metallurgy instantly. It’s also lucky that Tsukasa, the fighting prodigy, suddenly decided to send his stupidest people first. The war is going to be cakewalk at this rate.

The kudayari, or tube spear, is a real weapon that was once used in medieval wars. These days, it has an entire martial art devoted to it. Presumably Hyōga is a devotee of that art, and thus more than just a guy with a cool weapon.

Of Bees & Books: The Starless Sea by Erin Morgenstern

In this week’s viewing: Alliances shift in Attack on Titan, unexpected help appears in Sabikui Bisco, and more!

In this week’s viewing: Land of the Lustrous takes another strange turn, Guru-Guru notices a new season has started, and more!