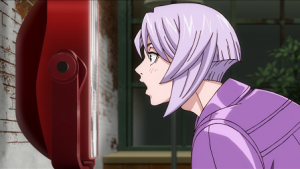 Double Decker! Doug & Kirill #6 – Kirill is having an excellent couple of days. First he gets to be on his favorite reality TV program, then he gets a lead on the whereabouts of his missing sister, and then she turns up! This is only slightly marred by the discovery that his big sister Ludmila is really his big brother Valery. I guess all those comments about Kirill looking girly weren’t just for cheap humor.

Exactly how suspicious is it that someone whose life includes a stint in deep cover and a mysterious disappearance should show up as the hired help at the very bar where all the detectives from the special drug unit hang out? We’ve seen over the last few episodes that Esperanza has moles practically everywhere, and I’ve been wondering who the one in Seven-O will turn out to be. But perhaps they’ve sent Valery in because none of the detectives have been compromised yet. Kirill is certainly the softest target in the unit, though I’d hope that Doug already smells a rat.

The other big revelation is of course the drunk, who, before he starts sobering up, is talking about the world being run by people up in the sky and sounding like he’s used to seeing only one sun. There’s your confirmation that this is not the same planet that Tiger & Bunny took place on (barring some kind of hollow Earth arrangement, anyway).

The next question is whether these secret overlords are also controlling Esperanza, or if Esperanza (“Hope”) wasn’t named out of cynicism and is actually working against them. I’m leaning toward the latter. I wonder if anyone in Seven-O might be connected to the secret overlords, then… 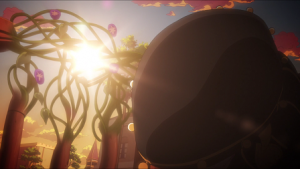 JoJo’s Bizarre Adventure: Golden Wind #4 – Sure enough, the new Stand is Polpo’s, acting on orders to promote anyone going through the lighter test to a Stand user or kill them in the process. Luckily Kōichi is still in the area to explain some of the rules of long-distance Stand operation, and then it’s time for a team smackdown. Kōichi heads home to report what a wonderful guy Giorno is, while Giorno engages in a spot of cold-blooded murder.

Kōichi has explained how most people get their Stands, but of course Giorno already has one. New viewers will have gotten the gist about Giorno’s heritage, but here it is in detail: JoJo kicked off with the story of Jonathan Joestar and his adopted brother Dio Brando. Dio transformed himself into an immortal vampire and killed Jonathan, attaching his own head to Jonathan’s body. Jonathan had already fathered a son, and the old man Kōichi was visualizing was Jonathan’s grandson. Jōtarō Kujō, the one who sent Kōichi on this mission, is Jonathan’s great-great-grandson, and the other guy is a great-grandson. Giorno was fathered by Dio after taking over Jonathan’s body, so he’s genetically a Joestar, and the Joestars developed Stands without the use of the Arrow.

Got all that? Right, you can forget it now. I don’t think it’ll matter much for the rest of the story.

What does matter is that, unlike Dio, Giorno has a highly developed sense of justice. You can start to see why Jōtarō was so concerned about Giorno being a new host for Dio. Combine his creativity and calm about killing with Dio’s complete lack of conscience, and you’d have a world-class villain. 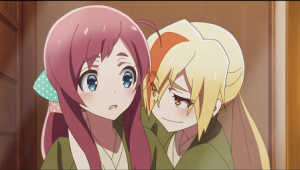 Zombie Land Saga #4 – Clearing up any worries of this turning into a straight idol show, this returns to poking at the idol industry with Kōtarō’s cheerful declaration that zombies are the best because they can’t be worked to death. And then it returns to horror as giving in to the temptation to go soak in the hot springs leads to an extended tribute to Ring.

There’s a lot here that’s ominous, starting with Ai’s point that they shouldn’t have been zombifiable corpses in the first place because Japan is big into cremation. It’s almost like someone has been specifically collecting them. Then there’s the moment when Saki finally snaps and punches Kōtarō (and becomes my hero forever), and we very noticeably don’t get a look at his eyes before he whips his sunglasses right back on.

So, is he some kind of supernatural monstrosity himself? I went back to episode 1 to look at the scene where he and Sakura are in a room with a mirror, but we don’t get an angle where one can definitively say he doesn’t have a reflection. But he does try to pull the same move on Sakura that he makes on the company representative in this episode. The vampire power of charm, perhaps? 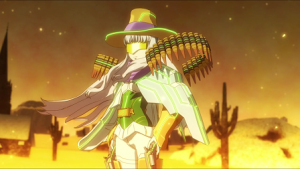 The Girl in Twilight #5 – The solo version of Yū is being awfully helpful. First she helps with the frequencies for two alternate worlds, then she’s eager to contribute to the next heist, and when that leads to two copies of just about everyone being hauled into the kangaroo court, she’s the one who brings their stuff to them, including the artifact Mia needs to morph into her fighting form. Why is she doing this? I sure hope she doesn’t start the next episode with a villainous monologue; the writing has been good enough this far that I’d think a lot less of it if she did.

One obvious possibility is that she’s working with the King of Twilight. Encouraging Asuka and company to go world-hopping might be helping open more cracks for those worlds to be destroyed. Another is that she just has philosophical differences with solo Asuka and is trying to mold our Asuka into someone more to her liking. Maybe she’s trying to set up a situation where Asuka is the first one into a world and gets to level up.

At any rate, Mia does a fine job here, escaping the suffocating clutches of kawaii culture and becoming the hero she’s always wanted to be. And she already has the reassurance of knowing that her family and friends will take it just fine if she wants to be more assertive from now on. I’d guess Chloe is going to be next in the spotlight, as the only person who hasn’t been fleshed out in any alternate personality. 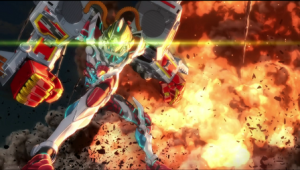 SSSS.Gridman #4 – Akane is losing patience, so she sends two kaiju out at once, which doesn’t go as well as planned because Anti is not going to share his kill. This also gives Team Gridman a chance to discover that their ancient computer doesn’t have the processing power to bring in all of the powerups at once. Thus the rules of engagement that can keep more or less the same fight happening over and over again are set.

Afterward, Rikka starts to wonder if kaiju attacks keep happening to people she knows because of her. And she might be somewhere near the truth. She’s the one who connects Akane and Yūta and all the people who’ve disappeared, and it’s her family shop that’s become Gridman HQ. She could very well have more to do with all of this than being the token girl. Maybe she’s central to what has created this reality?

Taking A Look At Gibson’s Neuromancer