In this week’s viewing: No Guns Life raises questions, Special 7 raises even more questions, Amazon Video leaves us all scratching our heads, and more!

Say, were you looking for a review of the premiere of Psycho-Pass 3, which aired last week? Unfortunately, Amazon has chosen not to make it available to the United States right now, so no review for you. Those of you in regions where it is available, feel free to let us all know how it went in the comments. 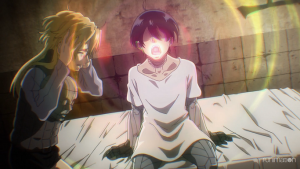 No Guns Life #3 – Mary gets Tetsurō into semi-working order just in time for his story to be interrupted by another local power forcing its way into Inui’s life. The gangsters that maintain order in the Kyūsei Pit have a mysterious anti-cyborg vigilante on their turf, and would Inui care to help them out? Instead he politely tells them to get lost without a scratch… and then gets hijacked by the kid in the next room, who promptly gets him cornered by Berühren.

Once Inui manages to extract himself and Tetsurō from this situation, they’re going to need to have a nice long talk about autonomy and consent. In the meantime, a lot more about the Berühren research program is revealed. It’s been going on for a long time, and has a lot more subjects than just Tetsurō. Some of those subjects are completely loyal. Tetsurō seems to be more important than any of them, both for Harmony and his status as the CEO’s son. Why erase his memories, though? Or is that just a common side effect of major cyborgization, since the same thing happened to Inui?

More questions: Why is the evil corporation named for the German word for “touch”? Why is the main anti-cyborg terrorist organization named for a Norwegian island? What’s with those ominous hoods and robes that Cunningham and his flunkies are wearing all of a sudden? What about the sudden outbreak with clothing with writing on it (Cunningham’s bunch with runes on their robes, and the gang boss with the character for “meat” on his shirt)? 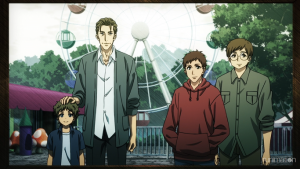 Special 7: Special Crime Investigation Unit #4 – Seiji gets paired with Nijō for a day to investigate a suspicious car fire which leads right back around to dragon worshippers and the mad bomber. Meanwhile, Nijō’s mole in the government warns him that the cult is gathering weapons for a new act of mass murder very soon.

Nijō is everything Ichinose isn’t— uptight and methodical with the evidence where Ichinose is slapdash and relies on psychology. Nijō also has long since sunk to the level of the ends justifying the means when it comes to dealing with terrorists. He apparently fed false information into the bomber’s network to lead him into an attack that nearly killed a child, all in the name of getting the bomber to show himself for a summary execution.

The attempted-murder mystery is neatly tied up while leaving a dozen more loose ends waving around for the larger plot, such as what would motivate “B” to target this specific child, who exactly Nijō’s informant is, how much the informant can be trusted, and when Ichinose is going to confront Seiji about his abilities. At least Seiji admits to being a bit tougher than average after he is caught flinging himself out of a third-floor (or higher) window and suffering only a slightly sprained ankle. 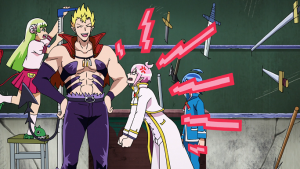 Welcome to Demon School! Iruma-kun #4 – Just as he’s starting to think that demon high school won’t be so bad, Iruma reports for his first day of class to discover that his least favorite teacher is in charge and the first day will be spent exercising a skill he has no way to fake. Still, it could be worse: he could be Saburo Sabnock, who apparently thinks he is in a Shonen Jump comic, and is constantly on the lookout for the most ridiculously dangerous thing he can do in order to level up.

For once, Sullivan has a plan that turns out exactly as intended. Being surrounded by all the biggest weirdos in school really does mean that Iruma may go relatively unremarked upon. Plus, it provides a handy supply of lovable dorks that the show can focus on one by one to keep the hijinks coming.

Even having a temporary new rival may work out, assuming Saburo survives his latest challenge. If he really is trying to be a Shonen Jump hero, he should latch right onto this whole new “friend” idea. 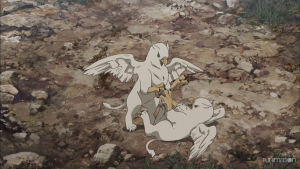 Kemono Michi: Rise Up #4 – Financial difficulties are starting to imperil the pet shop project, so Genzō decides everyone needs to shape up and start working. For a definition of “working” that includes still having time to declare his support for polyamory, break up the cutest little fight club ever, and collect a new mouth to feed. Still, the difficulties can be resolved with teamwork and perseverance… but mostly with Shigure’s penchant for finding abandoned magic swords.

According to my in-house wrestling expert, Genzō’s declaration that “the bell has rung” makes the rescue of Kyoko a type of scene so common that there’s a word for it: the run-in. Run-ins usually involve characters so upset about the outcome of the match that they come into the ring to start pummelling the winner, but swooping in to kidnap the loser still counts.

Meanwhile, it looks like someone else is preparing to summon their own champion. Could it be the one person featured in the credit sequences for no reason which is yet apparent, Genzō’s old nemesis, the Macadamian Ogre? Incidentally, his initials in Japanese, Ma-O, sound remarkably like the word for “demon king”, maō, which is traditionally used as a term for a Dark Lord in Japanese RPG-like worlds. 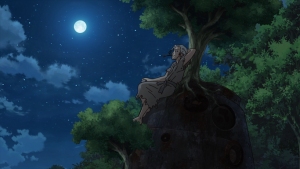 Dr. Stone #17 – In short order, the astronauts are all back from the ISS and doing their best to just survive. Connie and Shamil both die of untreatable pneumonia (why it keeps having to be pneumonia when just a cut gone septic would do, I don’t know), that other couple we barely got to know dies somewhere trying to find antibiotics (or do they?), and soon it’s just Byakuya, Lillian, and the surviving kids. Then Byakuya gets serious about preserving some knowledge and putting the pieces in place, like a low-tech Hari Seldon, for when Senkū eventually wakes up.

The revelation that Byakuya and Senkū aren’t related by blood illuminates a number of things. It means there’s no ex-wife to complicate Byakuya’s feelings about Lillian for instance. It also suggests that Senkū may have some origin which explains Byakuya’s confidence in his extraordinary abilities.

So what comes down to Senkū is not just some random band of primitives, but ready-made helpers, a direct message, and a curiously shaped rock in the middle of the village graveyard that may as well have a sign on it reading “IMPORTANT ARTIFACT BURIED HERE”. That Senkū doesn’t immediately investigate the rock feels odd, but perhaps he does and the writer is holding that part back until after that invasion that Gen suddenly remembered he was going to warn everyone about.

The Lego Movie is out on DVD–does it lack heart? Steve tells all.