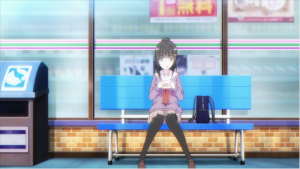 Granbelm finale – Shingetsu is now alone against Suishō. In a torrent of grandiose special effects animation, the two duke it out until one triumphs. And then it is time to lay out the last cards and explain what’s really going on.

One thousand years ago, the mages took magic out of the world and formed the Magiaconatus. But then the Magiaconatus asked, “Are you really sure?” by spending a millennium killing and damaging countless teenage girls. Shingetsu made it through the obstacles only by acting out the role that had been prepared for her perfectly. As Suishō has said more than once, the winner wasn’t going to be the smartest or the strongest, just the person the Magiaconatus liked best. This has all just been the price of its indecision.

So magic leaves the world retroactively somehow. Nene isn’t short anymore (come to think of it, we never got an explanation of how magic = insufficient height), Rosa and Shisui continue their lives as if nothing has happened, but Kuon and Anna are still dead. Or maybe they were just constructs all along too? Who cares, as long as Shingetsu gets her happy ending with her new classmate who looks suspiciously like a reborn Mangetsu, seems to be the message.

Granbelm owes a very obvious debt to a show from a few years ago, Puella Magi Madoka Magica. Shingetsu and Mangetsu are dead ringers for two of Madoka Magica‘s major characters, and their motivations are quite similar as well. But Madoka Magica was about confronting a cruel system and forcing it to change, while Granbelm winds up retroactively justifying everything. And if Granbelm wants to make the comparison so badly, it’s had some great art but nothing like the level of inventiveness Madoka Magica managed.

As an homage, then, it’s a botched job; standing on its own, it’s merely disappointing. 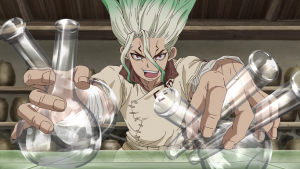 Dr. Stone #13 – Having surmounted the obstacle of hydrogen sulfide, Senkū gets busy with some chemicals that are even more deadly but much easier to get hold of, so to speak. The last thing the Kingdom of Science needs is alcohol, which can be easily obtained at the end of the tournament they need to win anyway. The tournament which they are almost certainly not winning with Kohaku suddenly removed from the equation and Kinrō up against Magma in the first round.

Kinrō actually does quite well, thanks to having the exact same prescription as Suika, and our heroes appear to be on the brink of victory. The suspense comes from the knowledge that you can’t possibly have the villain eliminated in the very first round of a classic shōnen tournament arc. My guess is that the helmet is going to be ruled cheating.

But that’s something we’ll need to wait a couple weeks for, since it’s fall premiere time next week! We’ll come back to this as we pick the shows to continue with through December.

The latest induction into the Greatest of All Time list