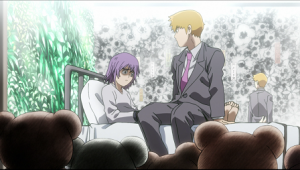 Mob Psycho 100 II #4 – Arataka Reigen may be a fraud, but he may also be the best fraudulent psychic the world has ever seen. Time and time again, he’s there to demonstrate that overwhelming supernatural ability is useless if a person gets too reliant on it alone. Just in one episode, he beats an entire room of genuine psychics twice, first at a simple game and then at working out which member of the family is possessed. And he gets in a good old-fashioned nonmagical attack in on the strongest evil spirit he and Mob have ever faced.

Still, it’s eventually time for the heavy artillery, i.e. Mob. And after a whole lot of fantastic animation as he and various others try to take Mogami down, he discovers that he has finally met his match. Mogami traps him in a dream world where he has no powers and, by look of the preview, his goodness is about to be severely tested.

We can count on Mob to stick to what’s right even under that kind of pressure. The bigger problem is likely to be dealing with Dimple when it comes time for Mob to reclaim his body… 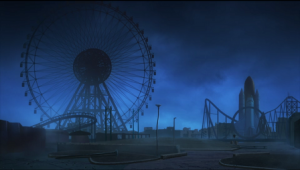 kemurikusa. #3 – The group manages to pass to Island Two without losing anyone. There they come across a uniquely surreal sight which provides the first strong clue to where they are. That’s Space World, a real-life amusement park on Kyushu (the southernmost of Japan’s major islands) which closed just over a year ago.

Once there, everyone takes a break and the Rinas provide a further demonstration of how the operate. By ingesting objects they find, they gain the ability to duplicate and remix them. They also know how to make more copies of themselves, which explains why there are several of them but not the other sisters.

Much is also said of their past companions Ryoku and Riku. Riku was the person who could sense temperature differences in the fog the way Wakaba could in episode 1, and now we learn that she could also charge the blue kemurikusa the way Wakaba does. This suggests that she was a human like Wakaba, except that everyone is very clear that they’ve never encountered anything like Wakaba before. So how does she happen to have been able to do the same things? 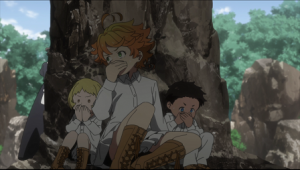 The Promised Neverland #3 – Yes, anime sometimes has, um, difficulties with rendering black people. At least we’ve gotten a character with depth and complexity underneath that design.

Krone and Isabella are implied to be products of the same farming system as the kids. They would have been smart enough to be allowed to live to age 12, so they’re at least on Emma, Norman, and Ray’s level. They’re in fierce competition with each other— Krone is immediately looking for a way to get Isabella’s job, and it’s general knowledge among the adults that only Isabella’s farm has been able to produce high-quality brains lately. Knowing what happens to most of the kids, the specter of that is probably still hanging over the adults. Fail to perform, and it’s still a seller’s market…

Shōnen tropes are still strongly at work alongside the horror. It is absolutely standard for a new character to be matched up against ones of known strength so that the viewer can know how much stronger the hero will need to get to defeat them. The patient explanation of the opponent’s weakness in the middle of a battle is also standard. And the games of “tag”, once Emma decides to weaponize them, make for a classic training montage. 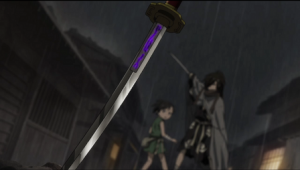 Dororo #4 – The demon that claimed Hyakkimaru’s ears and hearing lives in a sword that drags its wielder into an endless cycle of murder. Tannosuke was a reluctant soldier who was willing to die rather than carry out a mass execution, but pairing him with the sword made him an eager killer. So eager that the sword then took out his lord and comrades as well. Obvious metaphors are pretty obvious this week.

The sword’s name is Nihiru, or possibly Nihil. It would be odd for a Japanese sword of the 1500s to have a Latin name, but the author of this manga had a broad interest in religion and seems unconcerned with strict historical accuracy. Another case in point: origami cranes, which aren’t attested until the late 1700s. They are a symbol of peace now, but didn’t have that association until after World War II.

And it’s definitely the modern meaning that Tezuka is going with here: Tannosuke uses it to indicate his willingness to die to avoid further bloodshed a second time. 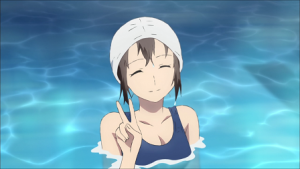 Magical Girl Spec-Ops Asuka #3 – Everyone has learned from Hollywood that Mexico is where drug cartels are until they get their butts kicked by patriotic white people from north of the border, so that’s what America’s own magical girl is is in the middle of when she stumbles across a sign that something much nastier is starting to emerge. At the same time, the Japanese secret police learn the same thing from their captive terrorist. What’s more disturbing, the existence of a magical terrorist organization or the fact that the drug dealers and the Japanese police appear to be using exactly the same torture techniques?

Back at Asuka’s school, Kurumi moves in and begins asserting her claim to Asuka. Nozomi and Sayako take this mostly in stride and accomodate her as a new member of the friend group. They make plans to hang out together, and Sayako surprises everyone by finding a way to fight through her fear.

And then it all goes wrong when Nozomi is kidnapped, ironically because of her father’s job, right after her father says he’s doing it to protect her. This might be the fridging we’ve been expecting, but I’ve started to wonder if it’s not for the obvious person. Asuka is getting pulled back into national service by Kurumi anyway.

But Sayako’s unexpected bravery and her determination to become stronger suggest that she has the makings of someone who could be recruited into Group M. What happens to Nozomi may happen so that she can get the extra push, rather than Asuka.