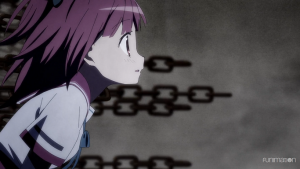 Magia Record: Puella Magi Madoka Magica Side Story #2-3 – Iroha returns to Kamihama, trying to track down any evidence that Ui existed. There she falls in with a group of magical girls who run afoul of another urban legend: the Chain Witch, who punishes people who try to un-cancel their ex-friends. It’s real, but a phenomenon rather than a being.

Kamihama was introduced as a place where magical girls could take back their contracts. The Chain Witch is a variation on the theme, a punishment for people who try to undo their solemn vows of friendship-ending. Whatever is odd about Kamihama has something to do with how rules operate.

Meanwhile, Iroha has not only remembered her sister but started recalling things that happened from Ui’s point of view. And then there’s her transformation sequence. All the magical girls (as was the case in the original Madoka Magica) have powers tied somehow to the wishes they’ve made. Kaede, who wanted to protect a garden, has a nature theme to hers. Rena’s transformation is full of mirrors, echoing her transformation ability. Yachiyo’s is themed to water, with a suggestion of tears. And Iroha’s shows her merging with a mysterious figure. Could that be what happened to Ui? Or could she actually be Ui? 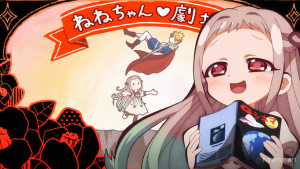 Toilet-Bound Hanako-kun #2 – Nene gets her first real job as an intermediary between Hanako and the other students when the school is plagued by a magical thief which is forced to conform to its legend. Then she gets to dreaming about being rescued by a handsome prince… except that when a guy does fall out of the sky and try to banish the ghost, she realizes that she’s actually come to like Hanako.

Hanako-kun is maintaining an excellent balance of cute and creepy. First the evil spirit that might kill you turns out to be a bunch of cute little rabbit-like critters. Then, just when Nene is coming to terms with the idea that she sees Hanako as a friend, Kō has to go and point out that Hanako’s knife means he probably killed someone.

That hopefully sets the stage for Hanako to explain next time just how he wound up as the school’s guardian spirit, and tied to a girls’ restroom no less. 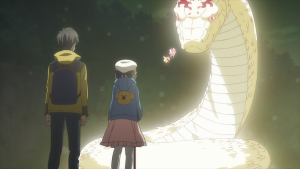 In/Spectre #2 – Kotoko is summoned to the abode of a mountain god who is curious about the ways of modern humans. Specifically, murderous humans and how a tangled tale of deceit and revenge can culminate in someone coming all the way out to the wilderness to do a sacrifice wrong.

What I expected from this show before it premiered: Paranormal romance along similar lines to the Western genre. What we’re getting: John Dickson Carr meets Japanese mythology.

In/Spectre is based on a manga which in turn is based on a novel. Its ultimate source really shows through here, as it spends most of an episode letting Kotoko and the serpent just sit and talk. Not that it’s an uninteresting talk, as they travel retroactively through what could be an entire mystery novel on its own. And yet there is still a point left for the great detective to answer next time. 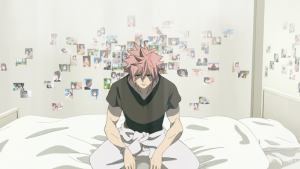 ID: Invaded #2-4 – Sakaidō solves one mystery after another in the wells, but in the real world he is Narihisago, an ex-detective turned killer after his family is murdered. He continues his killing spree in jail by occasionally talking other serial killers into suicide. This happens with the tacit approval of his ex-colleagues, who believe that losing the urge to kill would bar him from the wells.

It sure says a lot about what his old buddies think of Narihisago now that they explore whether a guy with a literal hole through his brain might be an improvement as a test subject. But the main point of that detour is the same as most of the material in these episodes, establishing the rules under which the wells operate. We see that even when a different pilot is substituted, they are still given the narrative of the master detective trying to solve Kaeru’s murder, making that a general property of the well technology.

On the other hand, we also see the limits of what even the people who work with the wells understand about them. They’ve only just figured out that John Walker isn’t another artifact of the wells. He represents some kind of outside force, with implications that someone else has technology that interacts with cognition particles, and is using it for evil. 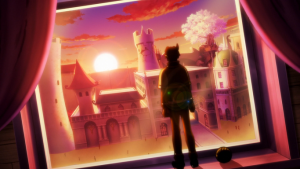 Welcome to Demon School! Iruma-kun #14-16 – Iruma, Asmodeus, and Clara are having the time of their lives after joining the Magical Apparatus Battler. Caught up in the exciting planning for the Battler Party, two major complications are hidden from them. First, Iruma’s doting grandpa is under arrest for participating in his trafficking. And second, their new buddy Kirio is about to execute a terrorist attack.

Well, this sweet little school comedy for kids turned a bit dark while we were away, didn’t it? I remain confident that Iruma’s goodness and luck will see him through this somehow, but they’re going to have to work fast to stop Kirio. Or to at least produce some improbable reason for everyone to be out of the blast zone. 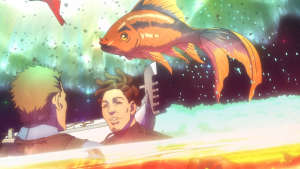 Pet #2 – Katsuragi’s Crushers go to work, but they don’t want to destroy Kenji’s mind completely. Instead, they try to recast his memories of Yokota, which requires a fantastical journey through his greatest and darkest thoughts.

Strictly as a visual work, Pet is incredibly good. As a character study of complex, flawed adults, it’s also doing very well. But it lets you down with a dull thud as you realize that none of the truly interesting people it’s constructed are going to be the focus of the story. Instead, the main characters are the two teenagers with all the personality of stale tofu. Plus, if you step back and take an inventory of the female characters so far, it encompasses three one-dimensional terrible mothers and a bar full of disposable sex objects.

With six possibilities and only room for five shows to keep watching for the rest of the season, it was a matter of which one would screw up first. And Pet has volunteered handsomely. I would have loved to watch the show about Katsuragi the criminal salaryman, putting up every day with the generational mismatch between him and Satoru, then going to Kenji’s bar to grouse about it. But it seems that it is not to be.