The impending premiere of the new version of the Amazing Stories television show prompts us to take a look back at the original Steven Spielberg – helmed series, continuing with 1984’s season one, episode two The Main Attraction 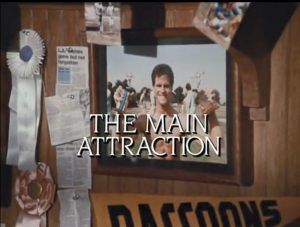 This episode, I am sure, was intended to demonstrate that the Amazing Stories series would have a humorous side, and that it most certainly did – in the 1980s. Today, this episode would be viewed as “problematic”.

Brad Bender is the stereotypical (and I mean stereotypical to the point of absurdity) home town high school hero and as we’ve been taught to expect, a stuck-up, self-centered, probably undeserving, probably narcisistic – perhaps even unto toxic levels;  he is so in love with himself that part of his morning routine involves kissing his mirrored image.

Owing to the long intro extolling this likely future candidate for President’s virtues, and then opening with Brad waking up in bed is an odd choice, because it makes us think, briefly, that all of the accolades and successes that have just been catalogued – All State for the fourth year running, top man in every single sport offered at his school and likely home-coming King – that it is all a dream and that we’re in for some other kind of story;  it is, I think, a bad attempt at making us feel some initial sympathy for this ass hole.

We’re quickly disabused of this potential notion as we witness Brad’s morning routine: breakfast in bed delivered by his adoring mother; Brad complains that the toast is not done right and Mom is chagrined; a sartorial exhibition involving eyebrow shaving, cologne selection and toilet dancing; a visit from his ‘friend’ who has been analyzing the likely votes for Home Coming King;  a trip to school in his Camarro (the latest model, I know, I had it) where a parking space in front of the entrance is being held for him by one of many adoring and overly-muscled sycophants, a line of swooning girls dying to be touched, or even just seen, by the wonderment that is Brad.

Now we are meant to hate him – and we do.  Other than his cohort and most of the girls in the school, it is also apparent that he resides at the top of the heap of the “Cool Kids” click, though various hallway and classroom scenes clue us in to the fact that other clicks are present as well – geeks, band, math club, stoners.

The tension arrives when the school principle changes the rules for choosing the Home Coming King (who will pick his Queen, since the previous year the school had voted for Queen and she’d gotten to pick the King);  instead of a straight up popularity contest (deliberately intended to stifle Brad), the winner will be based on who can sell the most lottery tickets.

While all of this is transpiring, we are also introduced to the fact that Shirley Crater, one of the ‘dogs’ among the female student population, is madly smitten over Brad and desires nothing but to be noticed by him.  Brad’s friends, Brad and even some of the non-insiders are heard to remark, in various ways, how unattractive, ugly, useless, Shirley is;  she’s the very definition of girl cooties, touching her, let alone dating her, would destroy the hapless male student’s reputation.  (No need to worry about Shirley’s rep – she’s just a girl….)

Shirley is apparently oblivious to the scorn and ridicule heaped upon her by all and sundry;  as we learn this, we’re also treated to fat shaming (a student other than Shirley), routine disrepect for ‘nerds’ and exposed to everything else that was terrible about high school in the mid-80s.  That normal background would likely send today’s high school students into a frenzy of protest.

All well and good but despite all of this expose, we’ve still not been introduced to the main story line until about half-way through (perhaps, once again reflecting upon Spielberg’s film chops), when it is revealed in science class that all of the students should make sure to watch the meteor shower that will be taking place later that night.

As is typical for him, Brad ignores the assignment;  we see him in his bedroom, doing anything but schoolwork, as the meteor shower takes place outside, visible through a window.  A fireball passes close by and shortly thereafter there is an explosion – the meteorite has struck ground.  Brad is reminded of the science assignement as he looks outside, relieved that the impact wasn’t closer, whereupon another meteorite is seen heading directly for his room.

The following morning, Brad refuses to go to school, despite the fact that he expects to be announced as the Homecoming King;  the fireball that crashed into his bedroom missed Brad, but has had an odd effect on him, turning his entire body into a magnet.  When we next see Brad, his body and face are festooned with forks, screws, and other random metallic bits.

(I should hope that I do not need to point out that magnetizing the human body is inherently unscientific.)

Brad finally goes to school under pressure of not winning the contest if he is not present;  once at school, he falls victim to hallways lines with lockers, the athletic departments equipment locker and other metallic objects; John Scott Clough has some major chops doing slapstick and he delivers so well during these scenes that we lose all of our hate and dislike – which robs the denouement of any real emotional content (which may have been deliberate as this looks, to all intents and purposes, to have been a light, comedic entry in the series).

Brad gets some small amount of comeuppance as the other students witness his flailing antics and he determines to escape from the school, only to become trapped by the flagpole, at which point it is revealed that the other fireball, the one that had missed Brad’s house, had in fact crashed nearby, into Shirley Crater’s home and she too, is magnetic.  Arms extended for a loving embrace, lips pursed for a kiss, Shirley is slowly dragged across the school’s courtyard towards a waiting and horrified Brad.

We’re supposed to see this as “justice for Brad” – he’s now going to be ‘stuck’ with the ugliest girl in the school while at the same time his magnetized self has become undesirable, but to today’s audience, it wouldn’t come across that way;  in the 80s, most viewers would have given it a couple of ha ha’s and then moved on (likely hoping that the first two episodes of this new series wasn’t an indicator of what the rest of the season would bring).  Today, it would be labelled as clueless, misogynistic and dumb.

The casual stigmatizing on display was a bit of a shock.  On a positive note, it is a good yardstick to measure societal progress over the past three odd decades.

A technician conducting empathy tests on androids stumbles across a life-changing secret when an unruly subject complicates her work.

4 Perfect Books to Pick Up and Read in September

Black holes aren’t as strong as we thought – Futurity